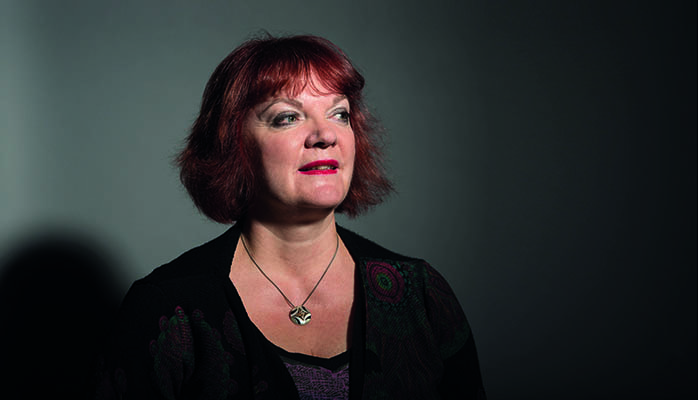 One of the most telling things Kathryn Morgan says comes quite late in our afternoon together. During her photo shoot, I ask what advice she would give to new actuarial students. Her first piece of advice is to just qualify, without getting distracted and wasting time. The second is not to worry about annoying people: "Don't be afraid to make waves." It's quite a revealing statement.

With vivid red hair and even redder lipstick, you might presume that Morgan leads by example. She certainly isn't timid or easily embarrassed. But neither is she loud or pushy. Instead, she is quiet and softly spoken. Perhaps this is indicative of the innate confidence with which she delivered the first Monica Allanach lecture earlier this year. Entitled Sex in the 21st Century, it explored gender (in)equality in the profession and elsewhere. It's a topic we return to, as our conversation covers gender diversity, her involvement in the IFoA Council, and her move to sunnier climes.

Morgan works as director of regulatory operations at the Financial Services Commission in Gibraltar, a role she clearly delights in. The regulator covers a diverse range of financial organisations, from the stock exchange to the bureaux de change. The position was new and it has given her plenty of scope to make it her own. It allows her to work within the chief executive's vision while building her own.

This freedom is important, as she firmly believes that if you have been given responsibility you need the power to fulfil it. "It's no good having responsibility and no power, or lots of power and no responsibility. They need to match up," she explains.

After studying maths at university, Morgan qualified as an actuary at Norwich Union, moving on to a variety of firms before a 12-year stint at the Co-operative Group. She followed that by working in the policy and supervisory teams at the Financial Services Authority (FSA). It was from there she was approached and offered her current position. Morgan admits her career has been varied: "I kind of chopped and changed - I've worked on pricing, reserving, life insurance, general insurance, a tiny bit of banking, just whatever came along."

Gender diversity is a topic of special interest for Morgan; she has a teenage daughter and is concerned about the sort of world she will be part of. "When I started working in 1983, it felt like all the opportunities were open," she remembers. She was convinced that by now, "the world would be a 50:50 place for men and women. The reality is that it's not. I don't think there are barriers there, but something's not working quite right."

Morgan points out that the conversation about diversity often revolves around childcare, and the assumption that it is purely a women's issue. But she is quick to point out that men are fathers too. It is later clear she is someone who wants to champion marginalised groups, but in a calm and rational way - an approach that, as you would expect, is more effective.

Despite her own success, she worries about the way we raise our daughters. "I think girls are trained to have unrealistic expectations," she tells me. The pressures to be slim and beautiful, to buy the right clothes, shoes and handbags, and to find a soulmate or the perfect man. Morgan sees all of this as unhealthy for women. "We need to think, 'Actually, what is it I want?' And then, 'What do I need in order to get there?'"

She is keen to stamp out the female tendency to be timid and apologetic, and acknowledges that women are inclined to be far more negative and self-critical than men. Her response to this is: "Stop! You're behaving like a woman! This is not on! You have to tell me the good stuff that you've done." So within her own team she has imposed a five-apology-per-day limit. "I read Christine Lagarde, who is amazing, still gets nervous before meetings, and still over-prepares. So does Angela Merkel. Whereas men, I think, are more prepared to wing it."

Morgan's approach to improving gender diversity would be to change attitudes at an early age. The only alternative, she accepts, is quotas, and this is a topic she is uneasy on. "My head says no and my heart says yes. I've been working for over 30 years, and although it has changed, it's not what I regard as 30 years of improvement."

I ask if she believes women-only networking events, like the Lady Actuaries' Dining Society of yesteryear (amusingly abbreviated to LADS), are still necessary. She recalls a conference at the Women's Insurance Network, where all the delegates and speakers were women. "People just seemed to wait before speaking, not push themselves forward." She compared this to an event where there was a man present. "It completely changed the dynamic. He just sort of took over!"
While acknowledging that this is anecdotal, Morgan believes that women-only events are "more of a safe environment for women. It just made it easier to network".

A seat at Council

Throughout her career, Morgan has had her fingers in many influential pies. While at the FSA, she was invited to sit on the Council of the Casualty Actuarial Society in the US, to offer an insight into the way the IFoA works in the UK. After three years of trips to the US, she began to think more about the way the IFoA is governed and how it interacts with members.

After sitting in on an IFoA Council meeting, Morgan decided to stand for election. Her thinking was: "I've got all this experience in the US about governance and challenge, and it seems a bit unfair not to use it." Standing for Council stemmed from a desire to "focus on the way the IFoA's governed and make sure it is in accordance with good practice and with what members might want".

She got involved in the project to rewrite the IFoA's governance manual and found her experience in the States to be of use. "I noticed quite a lot of the discussions we had seemed to fizzle out without coming to a conclusion. So I'd ask for more votes or clarity on decisions that we'd made. In America, everything we did we voted on."

A key concern is to get better representation for actuaries living outside major locations such as London and China, a preoccupation that probably stems from her experiences in Manchester and Gibraltar. "They all need some level of support," she says. "I'm not saying I don't get support in Gibraltar - I do. But I think it's very easy to get seduced by the glamour of China, and forget that we've got a whole bunch of people in Manchester, Bristol, Norwich, York and Leeds."

Morgan is concerned about members of the profession staying actively involved: "People do their CPD, but are they really doing it just by turning up at sessional meetings?" She believes engagement is a core part of being a professional, recounting how a friend advised her to always visit a young dentist, because they're the ones straight out of university and know all the latest techniques. "So what we've done as a profession, to counter the adage of 'don't go to an old actuary', is the CPD scheme. But if people don't take it seriously, then they aren't going to stay up to date, are they?"

Home away from home

Morgan has been working in Gibraltar for just over a year.  Previously her life had been somewhat complicated, living in Manchester with her family while working in London for four days a week for seven years. She relishes the opportunity for more family time. Of Gibraltar, she says: "It's a really nice place to live. It's a bit like Britain in the 1970s, and the whole jurisdiction only has 32,000 people, so there's a real sense of community. It's quite old-fashioned, respectful - people really support each other and look out for each other."

Gibraltar is part of the UK so it adopts the same European directives; but it's a much smaller territory that makes its own laws, which makes it easier for the regulator to make changes. Morgan believes this enables them to be more effective. "Because we're a small organisation, we can be a lot quicker at making decisions. We don't deal with a lot of hierarchy."

Aside from spending time with her family and getting to know the region, Morgan likes to keep active - she runs and cycles, and completed a triathlon last year. Occasionally, she cycles to Spain taking her passport with her. The route crosses the airport runway and she chuckles at the bizarreness of it all. "So you cycle over the runway, get to the border, show your passport, do your bike ride, and then the same thing on the way back. You only have to remember to speak Spanish when you're there."

During her recent lecture she had talked about how actuaries would be good in government, the possibility of having a 50% female Cabinet, and her admiration for Hillary Clinton. On that note I ask if she would ever go into politics. She seems surprised that I asked. "That's really interesting! I suppose it has some attractions, but no. There is a lot of scrutiny, any mistake is pounced upon, and there's no forgiveness; everything is very short-term. I think there is so much reliance on public speaking, being inspirational and all that stuff. I'm not sure I'd be that good at it."
I'm surprised by her modesty, which seems at odds with her views, and her many achievements, which range from her regulatory roles and position on Council, to giving a public voice to gender diversity. And as for being inspirational, you cannot make waves without pulling others in your wake.

Kathryn Morgan's lecture on Sex in the 21st Century is available to watch online at bit.ly/1DFHNPn

This article appeared in our December 2015 issue of The Actuary.
Click here to view this issue
Filed in:
12