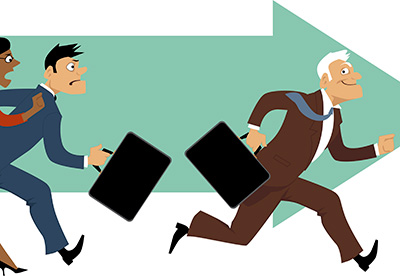 Work patterns are changing dramatically. The norm of a 'three-box' life course (education, paid work, retirement) is breaking down and the variety of working patterns is increasingly widespread. People are also living longer and facing the prospect of more years in retirement. Where increasing longevity is accompanied by ongoing health, one likely outcome is that people will work longer, either from a desire to remain active or from economic necessity.

Recent legislation, recognising this change, allows defined contribution (DC) pensions to be accessed in more flexible ways. However, social security systems and many private pension arrangements were designed with a binary state of retirement in mind, that is, either an individual is 'retired' or 'not retired'.

Retirement - a recent phenomenon
Retirement age is a 20th century phenomenon and came with the introduction of state pension benefits for older people. Modern state pensions began in the UK in 1908, when a non-contributory means-tested benefit was introduced for those aged over 70. In the 1940s, the age at which these benefits became available was reduced to 65 for men and to age 60 for widows and women. From 1946, entitlement to a pension was based on earnings across working life and, for the first time, became dependent on retirement from work, as well as age. For the next 60 years there were no changes to the age at which state pension benefits could be accessed.

Life expectancy in the UK has improved steadily over the 20th century but the improvements at later ages have been more recent. Concerns about increasing longevity have resulted in moves to increase the state pension age (SPA). Historically, employers encouraged individuals to retire at around SPA and although this is now illegal, there remain situations where a forced retirement age has been accepted by the courts.

SPA and private benefits
The majority of defined benefit pension plans are designed to link into the SPA and cease accrual of benefits beyond that age, usually defined as the 'normal' retirement age. They are also typically designed to commence from a single nominated age. This provides an indicator to employees as to when they are expected to retire. The combination of social and financial factors provides strong incentives for individuals to cease participation in the workforce at around SPA.

Since April 2011, those with DC pensions have been able to defer buying an annuity beyond age 75. From April 2015, the requirement for DC plan members to purchase an annuity at retirement was removed, along with the annual 'drawdown' cap, significantly increasing the flexibility those people have in the timing of taking their benefits. 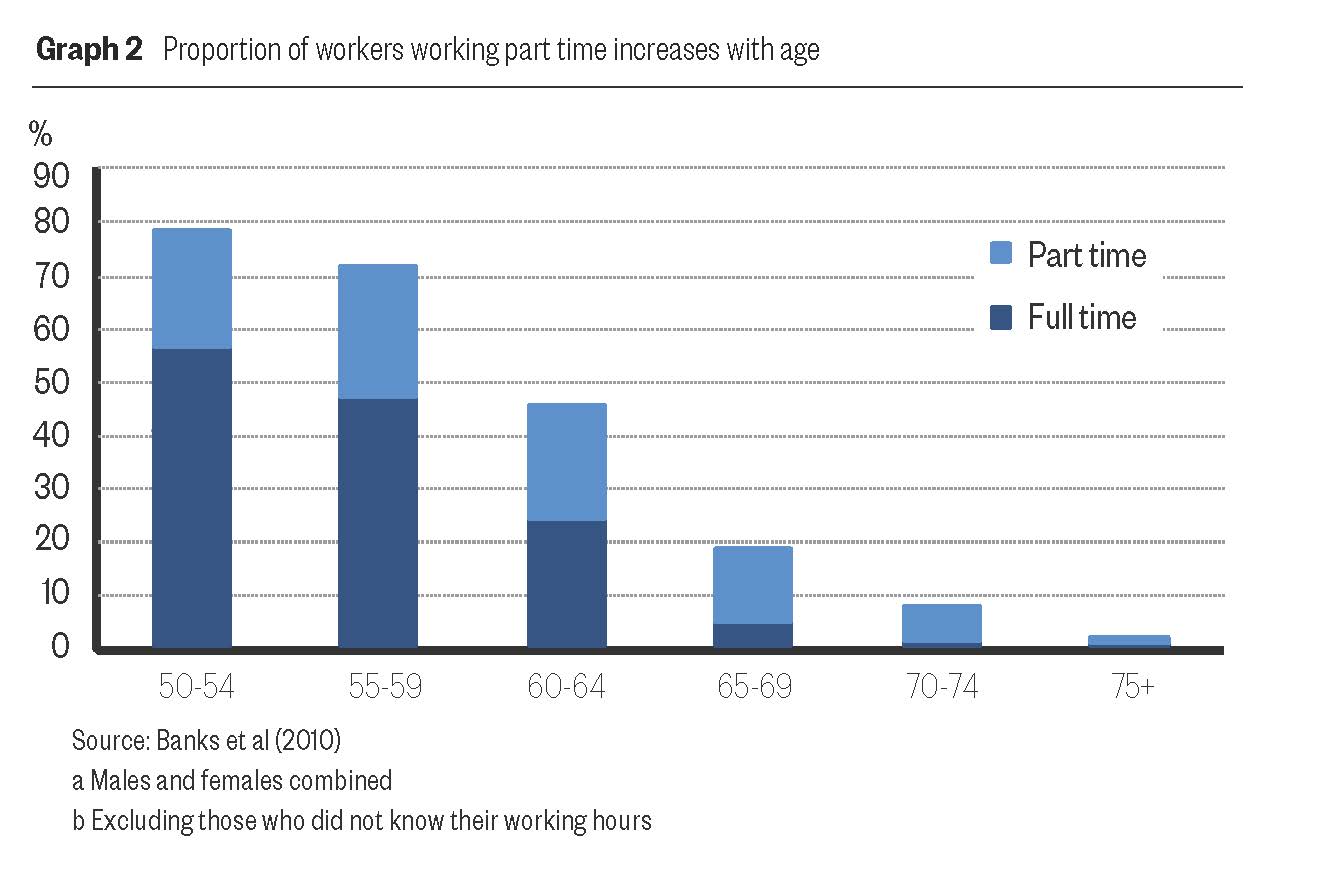 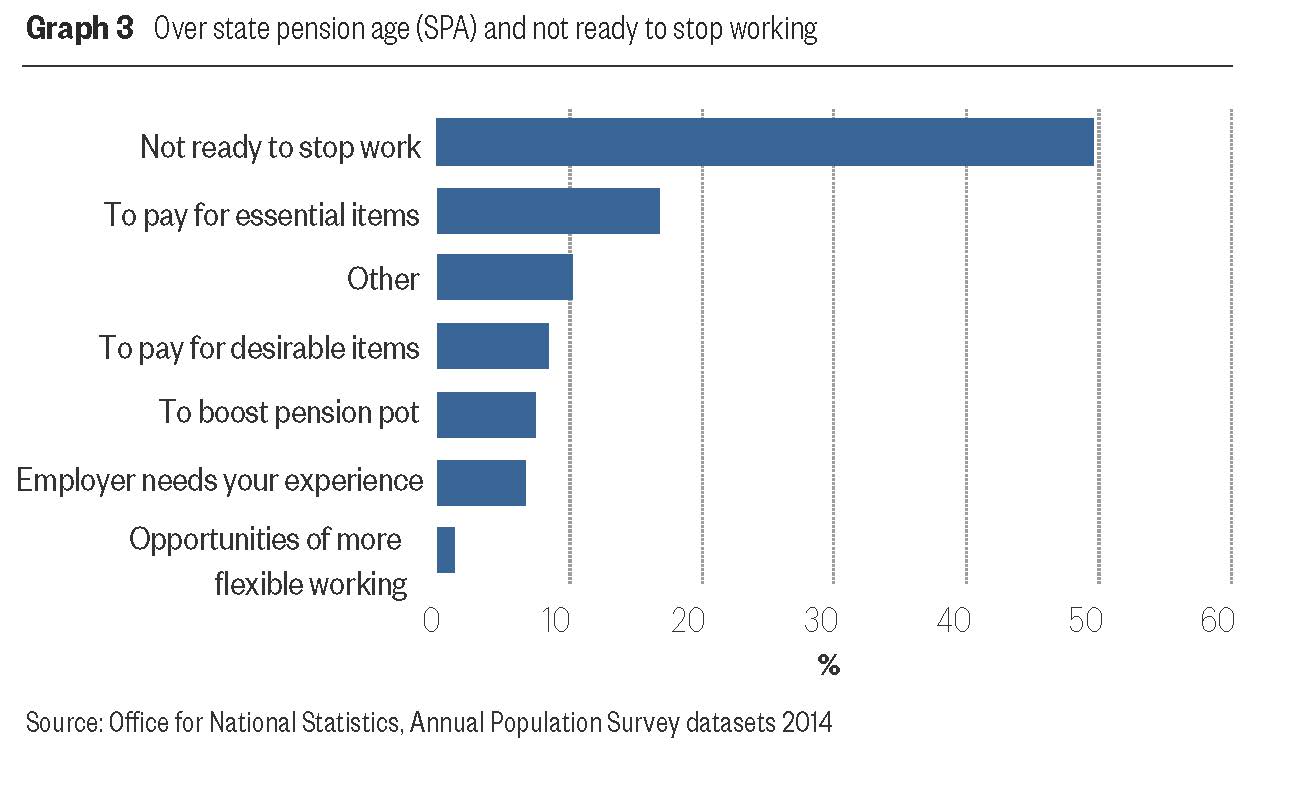 Changing work or retirement patterns
Historically, the majority of individuals planned their retirement to coincide with the SPA, however SPA is becoming a less reliable indicator of when people will cease paid employment. Around 25% of those between age 50 and SPA are outside employment (neither unemployed nor in employment). The most significant reasons for those over 50 leaving employment are ill-health and caring for sick partners and older relatives. There has also always been a portion of the working population who have retired earlier because they feel they have sufficient financial resources to meet their needs (generally people in the higher-educated, higher-income brackets).

At the other end of the retirement spectrum, there has been an increase in people continuing to work beyond SPA - from a relatively steady 7%-8% rate during the early 1990s to around 10% in 2011, representing 3.5% of the total workforce. By late 2014, 12.1% of those of SPA and over (13.5% of men and 10.4% of women) were employed (see graph 1). The fall in employment rates for women over SPA since 2010 is at least in part the result of the rise in SPA for women, although employment rates for women aged 50 to SPA have remained relatively steady at around 70%.

Alongside the trend towards working longer is a pattern of moving from work to retirement via a period of part-time employment. ONS statistics showed that between April and June 2011, 7.3% of men and 8.9% of women over SPA worked part-time, while 4.6% and 3.6% respectively worked full-time.

The same study also found that those with higher education levels were less likely to leave full-time work and move directly into workplace inactivity than less educated individuals; ill-health was a significant factor in ceasing work completely; and those with a DB pension were more than twice as likely to cease work completely as those with no private pension. Individuals who had a partner in good health but not in work were also more likely to leave the workforce.

For those who do continue in employment after age 65, it is predominantly of a part-time nature (see graph 2).

A follow-up study showed these trends have continued, with work and pensions increasingly operating hand in hand. 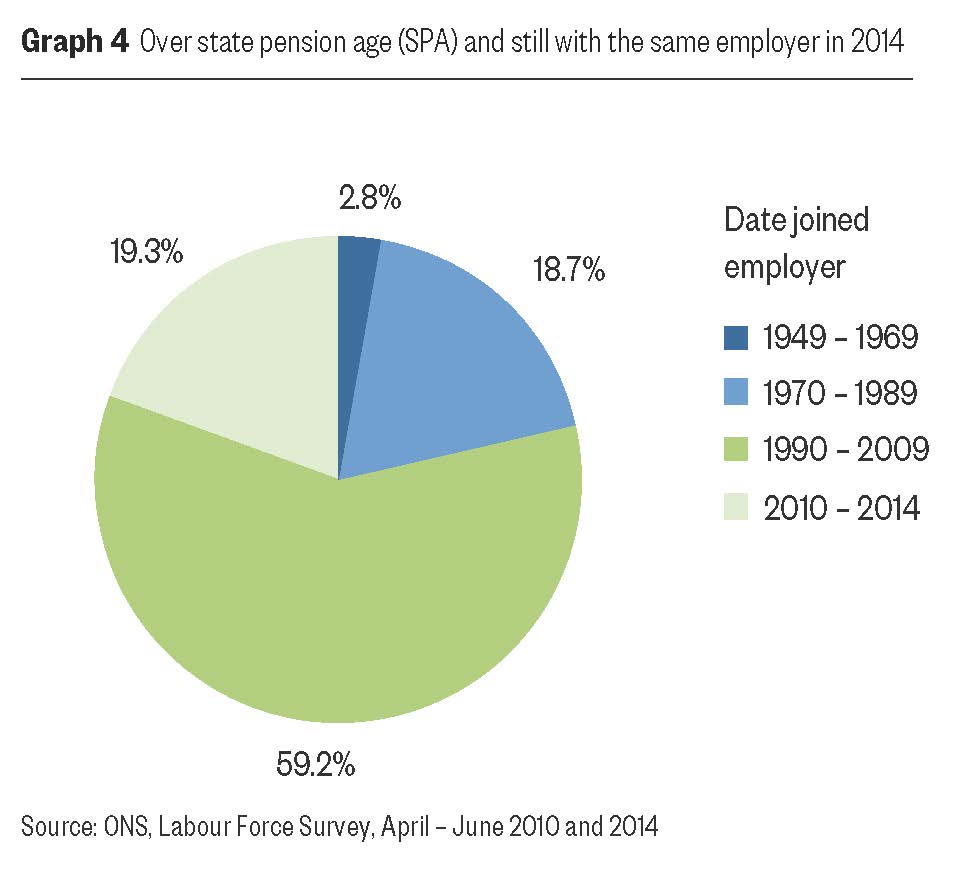 Nearly half of men and a third of women aged 60 to 64 years who received private pension income were still in work. However, these individuals were working reduced hours, taking a more gradual approach to retirement than the traditional abrupt cessation of work.

For those working beyond their SPA, almost 50% are doing so because they want to work rather than for economic need (see graph 3).

For those that continue working after SPA, the majority who work on a part-time basis do so with an employer they have already been with for five years or more (see graph 4).

SPA is no longer a reliable indicator of when people are likely to retire. However, social security systems and many private pension arrangements were designed with the expectation that retirement is a binary state. Efforts to cope with the costs of increasing longevity have focused on raising the SPA, allowing the deferral of the state pension and increasing flexibility in DC pensions.

The changing nature of retirement looks set to continue and provides both an opportunity and a challenge to make further changes, which would allow the phasing of private retirement benefits and potentially state pensions.

This would enable older people to have sufficient income while continuing to work on a part-time basis if they so choose. Equally important, it may also provide another tool to help reduce the strain of increasing longevity on public finances.