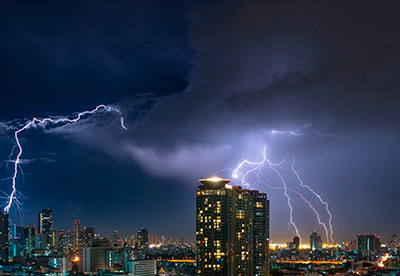 The world's cities have become expanding hubs for economic activity, and as more people move to metropolitan areas, further lives and assets are at risk when a natural disaster hits. As floods, storms, earthquakes and other natural hazards continue to threaten, strengthening the financial resilience of these sprawling cities is an important topic on the agenda of many governments, local authorities and large corporations.

While insurance solutions are readily available for cities to cope with the financial consequences of a natural disaster - such as property damage or other forms of economic loss - innovative solutions are becoming increasingly accessible for large corporations to find more cost effective protection against weather-related risks.

The insurance-linked securities (ILS) market is now around $60 billion in size and consists of financial instruments whose value is affected by an insured loss event. The solutions are increasing in popularity with investors as they are deemed to be uncorrelated to wider financial markets, as well as with insurers because, in most cases, such solutions are cheaper than traditional reinsurance products.

ILS instruments use parametric-based, as well as other, triggers, and pay out on an index linked to the size and location of a natural disaster. They can protect a company against corporate losses caused by the negative effects of weather on potential cashflows or profitability of the firm. Such products are most useful in scenarios where the effect of a loss severely encroaches on the short-term cashflow of a company, and therefore proof and settlement of that claim needs to be expedited.

A good example of this is the MetroCat Re catastrophe bond issued in 2013 by New York City's Metropolitan Transportation Authority (MTA), which operates the city's subway, bus system, bridges, tunnels and commuter railroads. After suffering a $5 billion loss from Hurricane Sandy in October 2012, the MTA sold a cat bond to investors who received regular coupon payments in return for agreeing to pick up an element of the cost of future repair bills caused by certain natural catastrophes.

ILS vs reinsurance
Traditionally, it has been property and casualty (re)insurers with risks linked to hurricanes, windstorms and earthquakes who have listed cat bonds, as they provide a way to transfer portions of risk to capital market investors. This reduces the (re)insurers' overall reinsurance costs and frees up capital to underwrite new insurance business. While it has been less common for large corporates to directly purchase an ILS product, it is increasing in popularity as a means of providing contingent business interruption cover for those in cashflow-sensitive industries.

The main attraction for large corporates is the rapid pay-out after an event. It is invaluable for a corporate so reliant on important cashflows to know there is unlikely to be six-12 months of claim settlement processes and proof of loss procedures. Most major companies can self-insure business-specific risks through their own captive insurance vehicles. However, it would be fairly simple for the corporate to access the ILS market directly from their captive insurance vehicles, and then manage that capacity directly as part of their overall risk management processes.

Furthermore, there are a number of market initiatives that explain to larger corporations how they can access this type of alternative reinsurance protection within the ILS market. This includes products such as industry loss warranties, which are annual reinsurance contracts whose pay-out mechanism is linked to the total loss from a natural disaster, rather than the buyer's own losses. More importantly, ILS solutions are generally available at a lower cost compared with insurance, simply because it is much more efficient and cost-effective for corporates to access the ILS market directly.

Pricing and valuation methods
The way such instruments are priced can vary from structure to structure. For significantly larger perils, such as hurricanes or earthquakes, the risk is well analysed and the ILS market typically uses third-party catastrophe modelling provided by companies such as AIR Worldwide or RMS.

These transactions would then be priced according to both the quantitative model outputs as well as to a number of qualitative aspects. However, for the subsidiary peril covers, such as freeze, there are a number of challenges in terms of the modelling and analysis of the risks - for instance, the accessibility and quantity of data. In the majority of such cases, a trigger would be set based on the specific reports from a weather station or a group of weather stations around the location of the risk.

The difficulty, even in the developed world, is that data can be inaccurate on occasion and depends on the reporting standards of the given national metrological service. Although this situation is perhaps acceptable in the short term, a longer-term solution still needs to be found.

Investor perspective
In the past, if an investor wanted to gain exposure to insurance risks, they could do this only by purchasing the equity or debt of a rated insurance carrier. Insurers typically turn to reinsurers to offload some of their risk, and, in some cases, the reinsurance company will also hedge a portion of their book as well. The end investors of such (re)insurance entities are effectively receiving a return on those net insurance risks, presumably as part of a wider, and already diversified, investment portfolio.

However, the investor ends up paying the management and infrastructural costs of each of those (re)insurance entities, diluting their returns as a result. The capital from an ILS investment is much more efficient in the sense that it avoids the sometimes substantial infrastructure costs of a global reinsurer. As a result, the return profile for the end investor is more attractive.

Around five years ago, the insurance industry tried to set up companies known as mono-line insurers in Bermuda. They would only write certain profitable lines of business, such as catastrophe risk. The models were not sustainable as rating agencies looked at the nature of the profitable risk, which was extremely volatile. Although the frequency was low, the value, when triggered, was high and this forced these mono-line insurers to diversify. Almost overnight, part of the mono-line insurer's exposure now came from less profitable business lines, which then reduced the potential return, owing to the negative effects of such diversification.

Investors now turn to ILS funds, which can typically succeed in areas where some of these Bermuda start-ups in the mid-2000s could not. An ILS fund can take 1%-2% of their overall portfolio and concentrate it in some very profitable areas, which, at the same time, have no correlation to wider financial markets.

The ILS market is an example of an industry that is innovative, and one that is developing to address the needs of both insurers and investors alike. As our cities continue to grow in size and complexity, both reinsurance and ILS can provide financial solutions to make them more resilient when disaster strikes.

John Butler is managing partner and head of sourcing at specialist insurance investment manager Twelve Capital
This article appeared in our November 2015 issue of The Actuary.
Click here to view this issue
Filed in:
11
Topics:
Reinsurance