What can smoking tell us about future mortality improvements? Mark Paulson reports 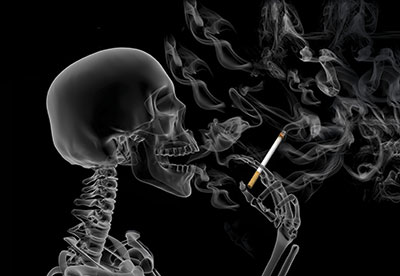 A simple projection of recent mortality improvements in the UK population would suggest that we should expect higher improvements in future than many longevity actuaries are allowing for in their assumptions. How can that be justified?

An important constituent of past UK mortality improvements is that caused by the reduced prevalence of smoking, which arises both from people quitting and from increasing numbers not taking up the habit. The relatively low current levels of smoking mean it is not possible for the magnitude of past reductions to be repeated in future. Additionally, new technologies like e-cigarettes look set to affect future changes in mortality improvements.

We can derive an estimate of how much recent mortality improvements have been driven by reductions in smoking, using information on the effect smoking has on the risk of death from specific causes combined with data segregated by cause of death.

E-cigarettes: a step into the unknown?
The effect of e-cigarettes on future mortality rates is currently not certain. It will depend both on their impact on health, and on whether they lead current smokers to reduce their consumption of conventional tobaccos, or whether they entice a new generation to develop a nicotine habit.

A recent Public Health England report concluded that e-cigarettes are "95% less harmful" than smoking and, according to one of the authors, "may well be much, much lower than that". If borne out, this would suggest that the mortality of e-cigarette users with no history of tobacco smoking would be only marginally higher than that of lifelong non-smokers. Whether existing smokers use e-cigarettes instead of, or alongside, conventional tobaccos would therefore become the key question.

Surveys commissioned by the public health charity Action on Smoking and Health (ASH) suggest that nearly 40% of e-cigarette users in Great Britain are ex-smokers, while the remaining 60% continue to smoke cigarettes alongside (the number of e-cigarette users who have never smoked is negligible).

ASH figures suggest that, after a few years of rapid growth, e-cigarette usage in Great Britain levelled off in 2015. But with the Public Health England report suggesting that e-cigarettes should be prescribed by the NHS in future to help smokers quit, usage could soon rise once more. The implications of e-cigarettes for future mortality improvements are clearly uncertain. However, if the NHS were to roll out such a policy, (conventional) smoking prevalence could reduce significantly again - providing a boost to the pace of improvements in mortality.

Smoking-specific improvements
The most credible datasets for analysing mortality improvements, such as UK population and death data published by the Office for National Statistics (ONS), are not categorised by smoking status. However, ONS does publish cause-of-death data.

Relative mortality risks by smoking and cause-of-death status can be sourced from the US Cancer Prevention Study II (CPS-II), the results of which the NHS considers to be transferable to the UK. Combining these two data sources with information on smoking prevalence, also published by ONS, allows us to derive smoking-specific rates of mortality improvement.

CPS-II provides relative mortality risks for three smoking categories - current smokers, ex-smokers and those who have never smoked. The ratio of smoker to 'never-smoked' mortality ranges from around 200%, for pneumonia and influenza among males, to more than 2,000% for cancer of the trachea, lung and bronchus. In total, smoking-related diseases covered within CPS-II account for just over half of all deaths among annuitant/pensioner ages in recent years, and a slightly larger proportion for males than females.

The prevalence rates provide 'exposures' in each category, while deaths are apportioned according to the CPS-II relative risk ratios. From these, we can calculate smoking-specific central rates of mortality, and the rates of improvement over time, for each smoking category.

The impact of changing habits
Figure 1 shows crude annual rates of mortality improvement in five-year age-bands for males aged 60 to 84 over a 30-year period ending in 2012. It indicates that these were generally very similar for all three smoking categories and that each had lower improvements than the male population as a whole, which were boosted by just over 0.5% a year by the reducing prevalence of smoking over the period. People often query this concept, asking how aggregate improvements can exceed those of each category. But as lifelong non-smokers and ex-smokers have lower rates of mortality than current smokers, a fall in smoking prevalence in the general population produces a mortality 'dividend', and is reflected in the higher mortality improvements for the "all" group in Figure 1. 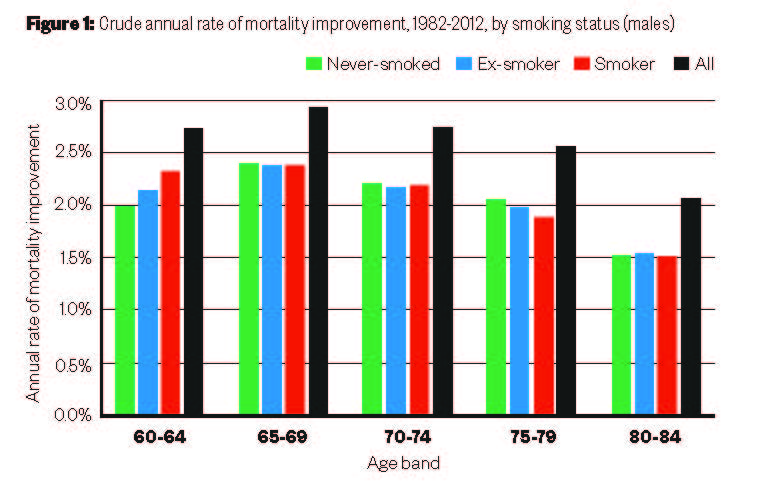 Figure 2, based on Cancer Research UK data, shows smoking prevalence among adults in Great Britain since 1948. Figures are not available for earlier years; however, cigarette smoking among UK males is known to have rapidly increased during the First World War and peaked at the end of the Second World War. This pattern of prevalence suggests it can be assumed that by the 1980s and 1990s, most male smokers among annuitant/pensioner age groups in the UK had been smoking for the majority of their adult life and hence the mortality risk ratios remain constant. Prior to this, each successive cohort of smokers was likely to have begun smoking at a younger age, on average, leading to increasing ratios over time.

The assumption may be less valid for females as we understand that smoking increased significantly in the 1940s and did not start to decline until the 1970s. The observed differential between the mortality of female smokers and those who never smoked, especially at older ages, may not yet have peaked in the years underlying the
CPS-II study.

This was illustrated by a recent BBC News story, which highlighted that the number of new female lung cancer cases - the vast majority linked to smoking - increased to over 20,000 in 2012. That continued the trend of increasing incidence rates among females, whereas rates for males continue to decline. The lag between male and female smoking prevalence peaks could give us an insight into future improvements for females.

Lung cancer now reflects an improvement in mortality for males, as members of the largest group of lifelong smokers have died. Incidence rates began to decline about 40 years after the peak in prevalence for males, especially at the oldest ages.

A similar period of time since peak-prevalence has now passed for females, and the cohorts with the largest proportion of female lifelong smokers are now at the critical ages for pension schemes and annuity books, so we can expect lung cancer incidence for females to level off and begin to decrease in the coming years.

Mortality improvements for specific smoking statuses have been lower than those at an aggregate level. Given the current level of smoking prevalence, it is not possible for past reductions to be repeated to the same extent. This suggests that changes in smoking patterns will have a diminishing impact on mortality improvements in future, particularly for males. E-cigarettes are set to create even more uncertainty around the speed of this change.

However, in the absence of changes in other factors, future mortality improvements will be lower than recent trends suggest. This could provide supporting evidence for actuaries selecting an assumption for long-term rates of improvement that is lower than recent rates.

For females, we can expect the past trend of deteriorating lung cancer mortality to switch to an improvement, having a positive impact at an aggregate level.

The effect may be smaller than it was for males, as female smoking prevalence peaked at a much lower level, but is an argument as to why future female mortality improvements could be higher than those for males.

Mark Paulson is a longevity actuary at Barnett Waddingham
This article appeared in our October 2015 issue of The Actuary.
Click here to view this issue
Filed in
10