A woman of influence

Margaret Snowdon OBE, a prominent figure in the pensions world, talks to Yvonne Wan and Jeremy Lee about her many industry roles, her thoughts on the pensions landscape and the future for actuaries 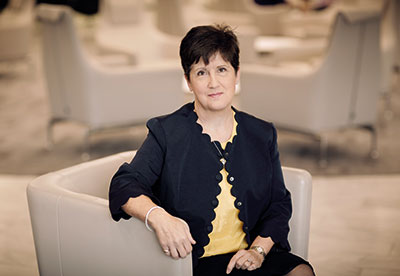 Margaret Snowdon has been named as one of the top 50 most influential people in pensions for the past five years, and was awarded an OBE in the 2010 New Year's Honours List for Services to Pensioners. Despite all the awards and accolades she has received during her career, Snowdon is quietly modest and unassuming about her achievements. It is evident from speaking with her that she has a genuine passion to help people achieve better outcomes in retirement, and that this is what truly motivates her.

Snowdon initially pursued a career in psychology, but made the change to pensions at the age of 24. She started as a retirement counsellor, and from there entered the world of pensions administration as a scheme administrator, before progressing into management and then consulting.

Having previously worked for Mercer and Towers Perrin at partner level, she joined JLT two-and-a-half years ago.
She describes her role there as "minister without portfolio", which means she is able to play in a wide space. She admits that she loves interfering in order to make a difference.

Snowdon has been heavily involved in research on pension policy and chairs a number of industry groups, including the Incentive Exercises Monitoring Board, which evaluates how employers run incentive exercises. These involve invitation or inducement for defined pension scheme members to make changes to their benefits.

She also works with the Pensions Administration Standards Association (PASA) - an independent body that sets standards for pensions administration, and is a member of Phoenix Group's independent governance committee (IGC), set up to improve the governance of workplace pensions and provide greater protection to scheme members.

Can you identify any key choices or decisions that you made during your career?
I ran my own business for a while, during which time I decided to help set up an insurance company. I'd worked alongside insurance companies before but never actually been in one. It was a scary choice when I made it several years ago, but it gave me new skills and I learned a lot about the financial services industry.

How successful has the PASA kitemark accreditation scheme been and what can we expect to see from PASA in the future?
I think the accreditation scheme is one of the best and it sorts out the sheep from the goats. But it's taking time to get the word out and encourage administrators to spend a few thousand pounds to become accredited and stand up for what they say they believe in.

We currently have half a dozen providers that have been brave enough to become early adopters and come forward to be accredited. But we need the industry to recognise that administrators that are being tested are actually worthwhile, and we need trustees to see the value in having an administrator that has proven it is fit for purpose.

Administration may not be sexy, but it is the window through to scheme members - and it is so important to the wellbeing of the pension scheme.

PASA is currently working on some guidance on administrative errors. Administrators have different ways of reporting on errors and we are looking for some consistency and broad rules. We're also about to relaunch our website, so watch out for this.

We've recently reviewed the code. Recommendations will go before the pensions minister, and the revised code should be in place before the end of the year. However, it won't be hugely different, as we believe there's no point re-inventing something that is already working well.

We've also produced a code on pension scams, which is very practical. It gets mentioned a lot around the pensions industry, and we are encouraged that people dealing with transfer values are taking it into account.

The code and the Pensions Regulator's 'Scorpion' campaign are there to protect people, but if only we could stop phantom websites and cold calling, we would end an awful lot of scamming. It is too easy for people to get in touch with members and persuade them that what they have to sell is the very thing for them. I think we can protect people from themselves through information and education.

People should be free to make mistakes, but they have to be able to recognise they could be in danger or at risk. Pension Wise is great but it is limited, and I think the government was wrong not to allow immediate commercial solutions.

How can we engage people before retirement?
The earlier we start, the better. Pension Wise is available to provide guidance to people from the age of 55, but I think that is far too late. People should be looking in their 30s at what they want to do in later life.

We need to help people understand what saving looks like, and how much they need to have in the pot when they reach retirement to afford a basket of groceries. If we could have a picture of pensioner poverty, it would soon make people think about saving for retirement. We could hijack the five-a-day fruit message and change it to: '£5 a day helps you work less and retire'.

One of the challenges facing IGCs is determining what is value for money - that is, what is important to a member. It's not all about how much money members will get, but the way in which they are treated and consulted too. It is early days for IGCs and there are mixed views. But the reality I've seen is that they really are focused on doing the right thing, and I think they will prove their worth over the next few years.

What skills and experiences do you think have helped you become one of the most influential people in pensions?
I couldn't do what I do on my own. One thing that has helped a lot is that I seem to have an ability to persuade people to get involved. I've always been someone who is very much at the sharp end, so I do get stuck in. I think people like the fact that I take on chairing roles, but it doesn't mean that I swan into a meeting, ask everybody else what they've done, and then swan back out again. I believe very passionately in everything I take on, and I think that rubs off a little bit on other people. I've also been lucky that I've had the capacity to do it, and fortunate that my employers have allowed me the flexibility to do these things.

How do you find working with the actuarial profession and what does the future hold for actuaries?
I like working with actuaries. It's stimulating and I admire their skills and professionalism. Even though defined benefit schemes are in decline, there is still a lot of actuarial work to be done. There are also opportunities for actuaries, especially with pensions flexibility. They will be needed to do modelling and research. There is a big study coming up around the secondary annuity market to make sure it runs fairly.

Risk is the biggest area for actuaries. It runs across all parts of retirement and beyond. It doesn't just cover pensions but also morbidity, mortality and elderly care. I think there are lots of things actuaries can do, as they have the very necessary numeracy and logic skills, and can be good communicators too.

Can you tell us some more about how your OBE came about and how that felt?
It was a surprise. You have to be nominated by somebody and then you go through a process of investigation by a government committee in the Cabinet Office to check that what is claimed on your behalf is actually true. I received the letter in November 2009 and remember thinking, 'Why would the Cabinet Office be writing to me?'.

It was lovely to be recognised, and it meant a lot to me because it was for services to pensioners. I was thrilled, and it was lovely to get to the palace with all the family there and have all those smiling photos - and an opportunity for a hat!

Did you have a chance to speak to the Queen about her retirement?
It was actually Prince Charles who presented me with the OBE. He did speak to me for quite some time. I recall he asked me about my involvement in the Pensions Advisory Service, but other than that I honestly don't remember what he said.

Do you have much spare time?
No, but I used to. I work very long hours. I usually start work at 7.30am and don't finish until about 11pm. It's rare for me to have a private life. It gives me a buzz though, and I enjoy it.
I would probably go mad if I didn't have lots of things to do.

My other interests have had to take a bit of a back seat in favour of all the other things I do right now. I'm a master diver so I enjoy diving. I'm also very interested in ecology and marine conservation.

Do you think you will you go back to psychology one day?
I think I probably will. I'm very interested in what happens in older life, and as I get closer to it I suppose I'll become even more interested.
This article appeared in our October 2015 issue of The Actuary.
Click here to view this issue
Filed in:
10
Also filed in:
Interviews