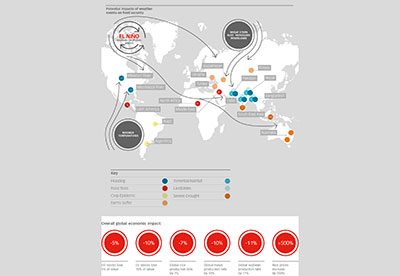 Abraham Maslow first noted the "hierarchy of needs" in his 1943 theory. Humans have many needs, but it is clear that food comes first. Working with leading academics, Lloyd's of London has recently published a scenario, Food System Shock: The Insurance Impacts of Acute Disruption to Global Food Supply, which considers the possible implications for the global economy of a disruption on a worldwide scale to this fundamental need.

We have added a whole world of people equal to the global population in 1905 to the planet in just 22 years since 1993.

How has the population growth over the past century been achieved? The answer lies in technology and the so-called Green Revolution. Fertilisers, mechanised farming, disease-resistant high-yielding crops and irrigation have massively increased agricultural output. But the rate of growth in supply has slowed significantly in recent times, and a Green Revolution II is not on the horizon. Meanwhile, food systems have globalised, creating interdependencies and security concerns that link commodities, sectors and parts of the world.

Samir Suweis et al in Resilience and Reactivity of Global Food Security argue that the Arab Spring uprisings were strongly influenced by the heat wave in Russia in 2010, which led to reductions in wheat yields. Russia acted to protect its people by restricting sales of wheat, leading to increased global prices through basic supply/demand economics. Egypt, a major importer of Russian wheat, attempted to suppress the price increase but could not ultimately fight the economics; high wheat prices led to social unrest and rioting - the rest is history. Pre-existing conditions had to be present for the outcome to emerge, but it is likely that food security issues played their part.

Food shocks can occur in many ways. Wars and conflicts can affect supply, diseases can reduce yields, transport systems can fail, floods can destroy otherwise healthy crops and droughts can stop them growing. Tasked with creating an extreme but plausible scenario - with a probability of occurrence within the one-in-200 likelihood that insurers must routinely consider - researchers Molly Jahn and Toby Lunt at the University of Wisconsin-Madison, and Aled Jones at Anglia Ruskin University produced a very interesting scenario as illustrated in the graphic.

In summary, a major El Niño event causes drought in Southern India and Australia, and leads to flooding in the United States and Pakistan. Warmer temperatures allow the Asian soybean rust pathogen to expand its usual range, which reduces soybean yields in South America. The scenario also assumes that major flooding in the US Mississippi river leads to transport disruption, which adds to the severity of the scenario. This leads to reductions in yields of between 7% and 10% for maize, wheat, rice and soy in a number of the major bread baskets around the world.

Economic and social scientists estimate that the effect on food prices of such a scenario are such that the prices of each commodity could increase by more than 400%. The impact of rising food prices is felt particularly acutely in poorer countries, where the scenario assumes that a variety of social unrest, terrorism and political violence arises. In one country, the impact spills over into the banking system, leading to currency effects. Potential insurance outcomes include claims against political violence, political risk, terrorism, event cancellation, environmental liability and property damage. The increased political tension is also assumed to affect investment market confidence, leading to a 5% reduction in US equity markets and a 10% reduction in UK equity markets.

Depending on asset mix, such a scenario could therefore affect the liability and asset side of the balance sheet simultaneously.

Lloyd's stresses that this is a scenario and not a prediction or a forecast. It is based on events that have all occurred before, though not in combination. Importantly, the scenario emphasises the power of expert-driven scenarios to explore little-understood emerging risks, and demonstrates the vast depth of knowledge in the academic community. Indeed, the UK and US governments have set up a task force to consider food security impacts of climate change, and the team behind the Lloyd's scenario was able to draw on their work.

The project highlights a gap in modelling capability; academics have built highly detailed global climate models, but more could be done to couple them with behavioural-based economic or social models. This seems to be an important next step and one that actuaries can help with, given our economic and modelling backgrounds.

This work has again confirmed that environmental issues such as water security, climate change and land use are not tomorrow's problem but today's. They are business relevant and should be added to our risk registers. Scenarios can help us quantify the financial effects.

This article appeared in our September 2015 issue of The Actuary.
Click here to view this issue
Filed in
09
Topics
Risk & ERM