On a wing and a prayer?

In the past year, there have been several major aviation incidents. Randhir Bilkhu considers the risks to airline insurance and the factors affecting profitability 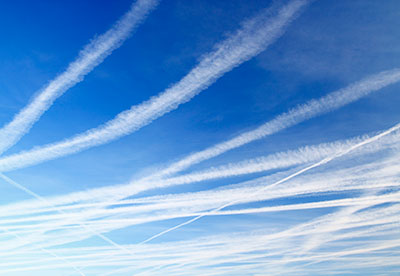 Aviation is a very small niche sector of the non-life market, but high-profile catastrophes often thrust this business into the spotlight, as seen in 2014, when Malaysia Airlines lost two Boeing 777 aircraft, and earlier this year, with the Germanwings Flight 9525 disaster.

Aviation risks have been insured almost since flying began in the early 20th century. The market developed after the end of the Second World War, when commercial flights became popular. Today, total market premium is estimated to be circa $5.25bn worldwide, split between the four major sub-classes of airlines, aerospace, general aviation and space.

Airline is the most high-profile sub-class, providing cover to commercial airlines.

A typical policy will cover hull and third-party liability with separate war coverage, which includes a range of perils, such as acts of war, terrorism, sabotage, hijacking and intentional malicious action. The recent Germanwings tragedy where the pilot deliberately crashed the plane is viewed as a war loss.

Policy limits for airline cover are large. If an aircraft is destroyed, losses can exceed $100m and, with typical limits for liability cover of around $2bn on a per aircraft basis, coverage is effectively unlimited. This means exposures at risk are enormous. In the five minutes it takes to read this article, there will have been 250 take-offs worldwide, representing $94bn at risk. The earned premium associated with this exposure? $13,500!

No single insurer has the capacity to wholly accept such large risks. However, airlines need a single policy to ensure consistency of coverage and claims handling. Therefore, business is written with one lead insurer, which manages policy wording and claims in exchange for a fee, and many co-insurers, which each take a share of the risk.

Claims for lost baggage, food poisoning or minor aircraft damage are common. Most claims are less than $10m and so are relatively small in size. The largest claims arise from fatal events, with insurers liable for passenger settlements, legal fees, search costs and wreckage site clean-up.

Fatal events are relatively infrequent. Although the events of 2014 resulted in 821 fatalities worldwide, 3.2 billion passengers travelled in 2014 so that's a rate of only 0.000026%, or almost one fatality for every 4 million passengers. However, as claim severity can be high, fatal events form a large portion of the total claim cost. Therefore the frequency of such events is a very important feature for insurers.

Frequency varies greatly by geographic region, with the biggest difference between the US and developing world as shown in Table 1 below. The five-year averages suggest for one accident in the US we could expect 40 in the developing world. This is probably because aircraft tend to be older, maintenance standards lower and pilots less well trained in developing countries.

Another important feature of frequency is the trend in fatality rates over time. Chart 1 below clearly shows that fatality rates have decreased over time, dropping from around 0.7 per million passengers in the mid-1990s to almost 0.1 in 2013, equivalent to an 8% annual reduction. 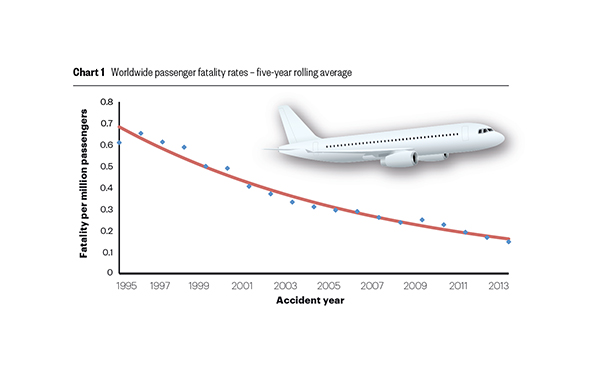 Why has there been an improvement? In short, the answers are learning from mistakes and better technology. The black box has been a crucial tool, allowing detailed analysis to understand the cause of accidents. This has helped aircraft design to be improved to prevent reoccurrence.

Pilot errors were a major source of accidents in the past and have been greatly reduced by sophisticated 'fly-by-wire' electronic equipment on modern aircraft. Developments like the Traffic Collision Avoidance System (TCAS) have reduced the chance of mid-air collisions.

New aircraft have also enhanced survivability. For example, in 2013 a Boeing 777 Asiana Airlines plane crashed at San Francisco airport with three fatalities. In the report, US authorities described how the aircraft's structure absorbed a tremendous amount of energy on impact. If the same incident had occurred on an older aircraft, it's likely the fatality count would have been much higher.

Safety improvement has been important for airline insurers, helping to offset declining premium rates. It's likely the trend will continue, particularly as modern aircraft and safety management standards are adopted in the developing world, but the rate of improvement may begin to tail off as each new step change in technology produces proportionately less gain.

A further trend to highlight is the change in exposures over time. Over the past 10 years, passenger numbers have increased dramatically from around 2.1bn in 2004 to 3.2bn in 2014. Most of this has come from growth in Asia and the Middle East. This trend is expected to continue, with the International Air Transport Association (IATA) predicting that annual passenger rates will reach 7bn by 2034.

2014 was undoubtedly a difficult year for insurers. There were four catastrophic claims above $100m, which meant many insurers made a loss on their airline portfolios. The events that occurred were highly unusual in their circumstances, which may have led to a perception that the experience in 2014 was an outlier.

However, Chart 2 (below) shows that 2014 wasn't an exceptional year for catastrophic claims. With an average of three per year over the past 20 years, 2014 is only slightly above average. It's reasonable to assume that this small variation from average frequency would be reflected in the premium, but unfortunately that's not the situation in the current market.

In fact, an era of persistent decline in premium rates since the high following the September 11 attacks have led to rates being at their lowest since the late 1990s, as shown in Chart 3 (below). This is a problem for insurers. With current market premiums around $1,500m, non-catastrophic claims (under $100m) consistently around $1,100m and assuming expenses of 20% of premium, which is somewhat optimistic, that leaves only $100m to cover potential catastrophes and provide a reasonable risk margin.

Although catastrophic claims are relatively infrequent, based on the past we could reasonably expect two to three events per year. With an average cost per event of $340m, $100m is insufficient to even cover one claim. What's more, with only one year since 1993 (Chart 2) with no claims, the likelihood of profit is very low.

Despite the losses, the 2014 renewal season showed no signs of a rebound in rates. Competition remains fierce and looks likely to continue. To stay profitable in the future, insurers may have to be more selective around the risks they write. This presents an ideal opportunity for actuaries to add value to the business, using their quantitative skills to aid risk selection.