Adrian Waddingham CBE, co-founder of Barnett Waddingham, explains to Richard Purcell and Jessica Elkin how a positive approach has unlocked a career full of opportunities 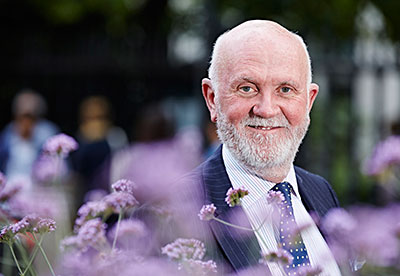 It's with characteristic modesty that Adrian Waddingham attributes much of his success to "a series of happy accidents" and so decisive is his calm and measured demeanour that you can almost believe it. Yet the more we talk through the many achievements and experiences of his life so far, the more you realise that this is an extraordinary individual.

We meet Waddingham at his offices in London, and are shown into the 'Imaginary' room - the first clue that this is a firm of actuaries (all the rooms are named after numbers).

But you quickly forget Waddingham is an actuary as he talks enthusiastically about his varied career, including spells in the Far East, growing a successful business, and representing the City as sheriff of London.

As a Lancashire lad, Waddingham reveals that he almost followed in the footsteps of his father, who practised as a lawyer locally. Unable to get a place at university to study law, he opted for maths instead. Yet being an actuary wasn't on the radar, even at the end of his degree. As he explains: "I hadn't heard of the actuarial profession and wondered what I should do next. All I knew was that I wanted to move to Liverpool to follow a girl I was sweet on." It was only after stumbling on a job advert for Duncan C Fraser that a life-long career as an actuary began. He adds that the move brought about "both a job and a wife".

Having qualified as an actuary in 1975, Waddingham went on to become a partner in 1977. "Life was good then," he says, adding "you won't believe this now, but we were busy setting up defined benefit (DB) schemes". In 1981 he was offered the opportunity to run the firm's Malaysian office. During the next four years he worked with both pension schemes and life companies around Asia within a team of just four people.

He recalls: "It was a wonderful time, but we were on our own. Back then, if we wanted to speak to London we had to book telephone calls in advance." Waddingham learnt much from the experience and concludes: "I was learning to run a business without realising it." On his return to the UK in 1985, he was asked to join the much busier London office. But the following year Mercer took over Duncan C Fraser, and it felt like the right time to set up his own practice.

Setting up in business

It was 1987 when Waddingham & Co was established. Although there was plenty of work from self-administered schemes requiring actuarial assistance, he quickly realised

the importance of building the credentials of his young firm. So after tempting a couple of old colleagues to join him, he also merged with Rodney Barnett & Co in London, and Barnett Waddingham was born in 1989.

Waddingham says: "We had offices in Amersham, Liverpool and London and just under 20 staff. We had no business plan, but lots of enthusiasm and good connections. We didn't earn much for a few years, but it was exciting." He adds: "It didn't feel like that much of a risk. If it went wrong we knew we would be able to find work again, even if that meant we'd have to eat some humble pie. Having supportive partners at home helped in the early days too."

Thanks to the founding partners being "sociable actuaries", as Waddingham puts it, they maintained good relationships with old colleagues, and gradually picked up more business from their competitors, including acquiring teams of staff when other firms decided to withdraw from areas of actuarial work. They went on to acquire offices in Glasgow, Birmingham, Cheltenham and even Duncan C Fraser's original office in Liverpool. Waddingham gives credit to "Her Majesty's government" for the continually changing pension rules that produced work for the business.

"It looked like a clever plan, but in fact was a series of happy accidents," he explains. "The thing was, we never said a job was too small or too uneconomic. We just needed to keep busy. After all, we've seen large clients grow from small acorns, and it's all just worked out."

Remarkably, Waddingham doesn't believe that starting his own firm was particularly brave. "It's happening all the time! The Association of Consulting Actuaries has over 100 member firms. What we did wasn't a one-off - the profession is healthy and it's still happening."

Today, Barnett Waddingham works with over 2,000 pension schemes, and 70% of its business is in relation to DB schemes, although this work is still growing. The other 30% is focused on insurance and wider fields including oil and gas.

As we discuss the decline of DB pensions, Waddingham takes us back to when he qualified. "At the time I thought it was a bad time to qualify because the DB schemes were all set up. I remember thinking 'just my luck'. But I couldn't have been more wrong. There has been a ceaseless onslaught of regulation because governments can't do 'simple' or 'permanent' changes. It's never-ending."

On the government's latest consultation to restructure tax relief on pension contributions, Waddingham is critical. "I am not a fan of moving away from the EET regime." The so-called Exempt-Exempt-Tax method means tax is only paid on money taken out of a pension, not on the way in or as it grows. "It looks like we could be moving towards the ISA regime, with contributions paid from taxed income." He is sceptical about what this will do to the attractiveness of pensions, and points out the need to make decisions for the long-term so people are motivated to lock away money until retirement.

Waddingham also believes that the pensions world could go full cycle. "When I started my career, we were setting up DB schemes because defined contribution (DC) schemes were not delivering. They were not providing a sufficient income for employees to retire on." While Waddingham does not believe DB as we know it is the solution, he does think we'll find a solution better than DC. He adds: "I was disappointed that the Turner Review didn't focus on the middle ground between DB and DC." Waddingham concludes: "I think in a few years' time employers will see an ageing workforce who can't afford to retire, and will be asking themselves 'Shouldn't we help them to retire?'." He thinks this could be a driver for new hybrid solutions that will help to manage the problem.

Life in the City

Waddingham's involvement in the City of London began with the Worshipful of Company of Actuaries, founded in 1979.

"I got the opportunity to be master in 2010, which allowed me to explore different livery companies and professions. You're meeting people from all walks of life." It gave him a window into the City of London Corporation and, after enjoying his time as chair, he confesses: "It didn't take too much to tempt me to throw my hat into the ring for sheriff of London."

Following his election as one of the two sheriffs of London that support the Lord Mayor, he and his wife moved into the Old Bailey, the official residence of the sheriffs, for the duration of his one-year term. Waddingham explains that one of his responsibilities was to ensure the comfort of the 16 judges that reside in the Old Bailey. He explains: "I had to host lunches for the judges three days a week, to create an oasis in the middle of their busy days. What's more, I had to find three guests for every lunch." Looking for 400 guests over the course of the year at first proved a daunting task, but supporting the Lord Mayor at functions every evening meant that it wasn't so difficult to find them.

Waddingham reflects: "I don't miss the pomp and circumstance, but I miss meeting all these interesting people, including the unsung heroes of the charitable world. Every single night you're out for dinner. It was great to be busy doing nice things." It was also an opportunity for Waddingham to fly the flag for the profession. Although he was described by the Queen as "the Lord Mayor's minder", in reality being sheriff also meant travelling overseas representing the City and meeting presidents, prime ministers; and even awarding the Freedom of the City of London to Desmond Tutu, whom Waddingham describes as "a lovely man".

So how did he balance this with his day job? "Fortunately, being a partnership means you have some flexibility to slow down a bit." On the topic of getting involved in other activities in the profession and the City of London, he stresses the importance of firms supporting their people to do more.

We end by discussing the future for actuaries in new fields, a transition which Waddingham believes should have been made years ago. "Actuaries are bright people and can make the leap," he says. "In areas that require long-term risk-management, I think we can offer good value for money."

When we ask what his advice would be to younger actuaries today, he contemplates that actuaries of the future will see very different careers to his. However, he is optimistic about their future. He suggests: "Keep in touch with fellow actuaries; you never know what might come your way."

He concludes that perhaps most important of all is simply taking the opportunities that present themselves - an act to which he attributes his greatest successes in life. He puts it simply: "Just say yes when an opportunity arises."

This article appeared in our September 2015 issue of The Actuary.
Click here to view this issue
Filed in:
09
Also filed in:
Interviews