Tipped for the top

Influence the right people at the right time to get what you want in business, says Andy Bounds 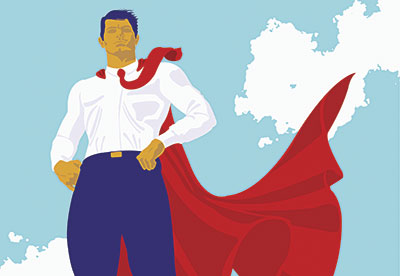 When you have a meeting with a prospect, how do you prepare? Pull some materials together? Create a new slide deck? Prepare your opening line? Perhaps: "Thanks for sparing your time"? People do things like this all the time. You see it every day. But just because it's everywhere doesn't mean it's the best way. For example, when you turn up with pre-prepared material that they haven't asked for, they'll probably assume you intend to talk at them; not with them.

And phrases like 'thanks for sparing your time' can come across as deferential - 'your time's more important than mine' - and not equal. The other person picks up on this and - without doing a thing - they are now in charge. This means your conversation usually ends with what they want, not what you want. This could mean you don't get the business you want. Or you might but you'll lose the price negotiation. When this happens, you have effectively 'lost' before you even start talking.

Important people are impressive, not subservient

If this situation sounds depressingly familiar, don't worry, you aren't alone. When pushed, most actuaries would admit their approach doesn't differentiate them from anyone else. They also know that, unless they can establish peer-level relationships and credibility, they'll always lose to the 'top dog'.

But the important people you meet don't want you to be like this - they want you to impress them. To help them. To add value to them. That's why they're seeing you. Since many of your competitors struggle with this, it's a huge opportunity for you. Here are three simple ways to surge ahead of the rest.

Step 1: Get the meeting super-fast

The people you want to meet are busy. They're often besieged by desperate salespeople under pressure to meet targets, and focused on their own agenda. So, to get a meeting - and for it to be successful - you must differentiate yourself from that lot. But getting meetings with these execs is hard. And doing so when they haven't heard of you can be virtually impossible.

Fortunately, there are a few ways you can trigger these meetings without trying very hard. The simplest is to find which is best for you by listing all your possible approaches - cold calling, networking, and others - and grading each one for its (1) likelihood to work and (2) pleasantness to do. After all, there's no point doing something that isn't likely to work. And you won't find the time to do something you hate.

Have a look at the table above. Yours would look different, of course - different activities and gradings. But my rationale for putting these where they are is:

? referrals are often best - they're likely to work and are pretty pleasant to do;

? coffee with friends is obviously pleasant, but if they never give you any business well, as a business development (BD) exercise, it isn't working;

? networking often works quite well, though lots of people don't like it much;

? stalking will definitely get you a meeting, but it probably won't be too pleasant;

? many people hate cold-calling - both the caller and callee.

Once you know that, say, referrals are your best bet well, go for referrals. Speak to your existing contacts, and ask them to introduce you to named people you want to connect with.

And/or search on LinkedIn for your target prospects. Click on their profile and find the names of mutual contacts. Then ask one of these mutual contacts to introduce you believe me, this is much more likely to work than cold-calling strangers, or sitting by your desk saying you've 'no time' to do BD.

Once you've got the meeting, you must impress them when you're there - or there is no point in going. But meeting strangers isn't easy. And, if you're like many actuaries, you'll fall into one of two camps:

? you do what everyone else does - give your business card, shake hands, and politely ask "how's business?";

? you don't really know what to do, so don't do anything.

Neither is good. One doesn't make much impression. The other doesn't make - well, anything. So, here are some simple ways to impress at meetings.

Start well. Pre-prepare a personalised icebreaker, to kick things off. If the introduction has come about by referrals, you have a shared interest in the person who referred you. So talk about them. Or do a bit of research beforehand and find a mutual interest, and talk about that. Anything that breaks down the barriers and helps build rapport quickly.

They will, however, want to know some things about you. So, there are two important things to prepare.

? Stories of work you've done with similar organisations. People like stories, they're engaging and they stimulate conversation. They're also a great way of providing evidence that your stuff works.

? Teaching. In this first meeting, you want to ensure that - at least once - the prospect says: "Well I never knew that before. That is useful". When that happens, you've immediately differentiated yourself from every other actuary out there. And, if you can teach them something valuable this early, surely it's worth them seeing you again.

Step 3: Ensure there are agreed next steps

You're in a great place now. You've captured their interest. You've established personal and professional credibility. You've gained some insight into their most important challenges. You've told them impressive stories. You've taught them useful stuff. You might even have started to explore how your services could help.

So, what else could there be? Well, only the most important thing. To arrange a second meeting. Without it, your first meeting becomes a total waste of time. So, bring the meeting to a close - and by the way, always finish on/before time. Execs will never thank you for making them late for their next appointment, no matter how well you thought your meeting was going. One script that works well: "I'm conscious of time. I suggest we meet again to continue our dialogue.

In the meantime, I will ask my colleagues for some relevant examples based on the content we've discussed. Can I suggest you think about the specific areas you'd like us to focus on next time, to ensure we have a very useful second meeting?"

Assuming agreement, just say you'll arrange something in the near future. Shake hands. Then get out. Notice that the best way to end a meeting is not to thank the executive for her time - or worse, for sparing it to meet with you. This is subservient language. 'Top dog' stance - the language of equals - requires you only to say "I enjoyed our meeting and will be in touch soon".

Let's end with the most frequent objection actuaries have to doing BD - that of not having the time. Well, the thing about time is that it's never about time. It's about priority. There's always time to do the things you prioritise. It's like when people say: "We moved house six months ago. We haven't had time to unpack all our boxes yet. But I did manage to play Call Of Duty for six hours this weekend."

There's always time to do the suggestions in this article. None take very long. Even better, there's a whole host of potential clients out there who are itching for an actuary to get in touch with - and impress - them. Someone's going to. It might as well be you.


Andy Bounds is co-author of Top Dog: Impress And Influence Everyone You Meet, and an award-winning business development consultant.

This article appeared in our August 2015 issue of The Actuary.
Click here to view this issue
Filed in
08
Topics
Careers
Professional
Soft skills