Medical underwriting is not new to the bulk annuity transfer market, having been used by life insurers in recent years to price typically smaller schemes. It can also be used, though, to manage risk concentration in larger schemes through top-slicing, says Costas Yiasoumi 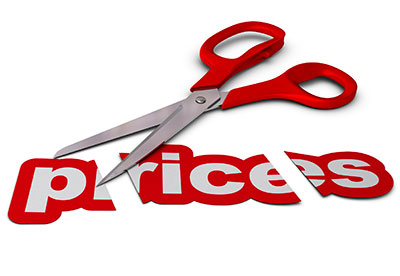 It explained that two medically underwritten annuity specialists in the retail market had launched MUBA propositions for de-risking defined benefit pension plans, which, along with two incumbent bulk annuity insurers also quoting for MUBAs, offered a credible insurer pool from which to seek competitive quotations. At that time, 14 MUBAs had been completed, the largest being in excess of £35m. The prediction was that the use of MUBAs would grow.

The actual take up of MUBAs over 2014 exceeded many expectations.

? By the end of 2014, 43 MUBAs had been completed, representing nearly £800m of bulk annuity premiums (Hymans Robertson,

? The largest single MUBA was a £206m 'top-slice' for Taylor Wimpey.

So what is a medically underwritten bulk annuity? 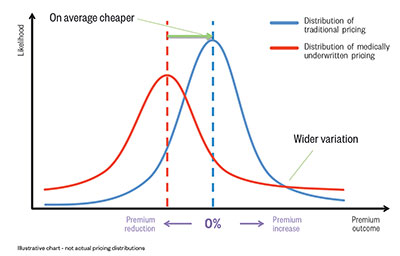 What does this mean for pricing?

There are two key consequences.

? The theory says that, as for all insurance, the more usable rating information an insurer has on risks it is writing, the more confident it can be in pricing, meaning less prudence. More data means lower pricing on average.

The net impact of these factors is that pricing should, on average, be lower under a MUBA than on a traditional bulk annuity. However, some pension plans could end up paying more - namely, the ones whose members are healthier than a traditional pricing approach would suggest.

Of course, life expectancy is only one of various components to bulk annuity pricing. Others include asset return, cost of capital and different views on future mortality trends. Therefore, these other factors create 'noise' around what the theory says. Market experience, however, is that MUBA pricing has been coming out around 5%-10% lower than traditional bulk annuity pricing. This is consistent with a paper from Cass Business School and the Pensions Institute (A Healthier Way to De-Risk, February 2013), which suggested that medical underwriting can offer savings of up to 10%, compared with traditional pricing. This can have a marked impact on the shortfall, as illustrated in Chart 1.

Cream of the crop

Medical underwriting has less effect on larger pension schemes - a consequence of the 'law of large numbers'. Where the number of pensioners is very large, a postcode pricing model supplemented with credible experience analysis is sufficient to gain a good grasp of life expectancy. However, even for the largest pension plans, there is the potential to apply MUBAs to de-risk and unlock value.

Traditional rating factors such as postcodes are of little use for rating such large liability lives in a way that can differentiate between the actual likely variations of life expectancies between members. The expectation would therefore be that they would be priced more cautiously for bulk annuity purposes. Before medically underwritten innovation arrived, 'top-slicing' (insuring the pensioners with the largest pensions) was unattractive.

Medical underwriting changes this. Having lifestyle and medical information for those pensioners means that a far more refined life expectancy can be calculated. In all types of insurance, more data implies less uncertainty, which can lead to sharper pricing. Top-slicing is now attractive, and there have already been several top-slicing transactions over the past year.

Data collection from pensioners is straightforward. Over the past 24 months, there has been a sufficiently large number of data collection exercises to result in an accepted common approach for MUBAs.

1. The trustees appoint a third-party specialist to collect the data - they act as a hub, receiving data from pensioners and passing it securely to the insurers.

2. Agreement is reached on which pensioners will be contacted for medical and lifestyle data - usually pensioners with the smallest pensions are not approached.

3. A short form questionnaire is sent to the pensioners - around a dozen simple "yes/no" type questions such as "Have you ever had a heart attack?".

4. For those respondents indicating a medical or lifestyle factor, additional information is obtained - usually in the form of a GP report or a telephone interview. Proportionality applies, so, for example, GP reports are not sought for members with smaller pensions and/or minor medical ailments.

The largest MUBA to date was the December 2014 transaction by Taylor Wimpey's pension scheme.

This is a £2bn defined benefit pension scheme with around 20,000 members. The 100 or so pensioners covered by the MUBA represented around 20% of the pensioner (10% of total) liabilities.

Various insurers agreed to quote, and lifestyle/medical data was obtained by a specialist third party and passed to those insurers for pricing. The pensioners did not have an atypical distribution of health conditions for a top-end socio-economic group of members.

The end result was the completion of a MUBA with a premium of £206m, which the scheme trustees reported was £9.4m (5%) below their technical provisions.

Medical underwriting is likely to become increasingly prevalent in the bulk annuity market for de-risking smaller and medium-size pension plans alongside traditional pricing approaches. I also expect that pension plans of all sizes will increasingly take advantage of top-slicing for their largest pensioners.

The outlook is therefore greater choice in how pension plans can de-risk, which can only be of benefit to trustees, corporate sponsors and pension scheme members. This offers actuaries the opportunity to advise trustees on new ways to de-risk.

? Concentration of benefits drives risk within a scheme => tackles a primary risk.

? Scheme technical provision assumptions can be prudent for these members => releases reserves.

? High response rates can be expected for medical data collection as these should be highly engaged members.

This article appeared in our August 2015 issue of The Actuary.
Click here to view this issue
Filed in
08
Topics
Life insurance