Carbon Risk: how do we measure and manage it?

We have reached a turning point in taking account of carbon risk, says Lauren Smart, and if managed properly, this could have positive results for pension funds and insurers 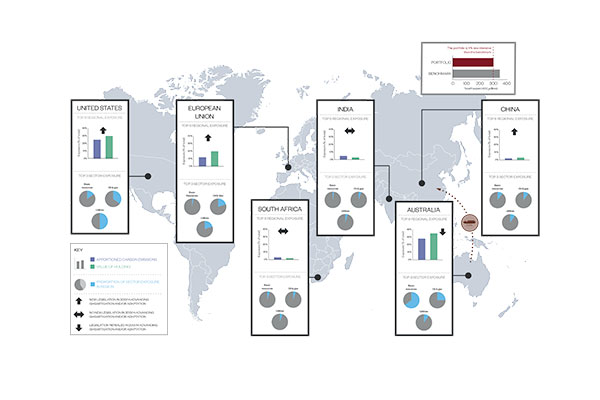 The year 2015 may go down in history as the turning point in the management of carbon risk by pension funds, insurers and banks. By the United Nations Climate Change Conference in Paris in December, we expect to see a coalition of investors commit to decarbonising at least $100bn of institutional equity investment as part of the Portfolio Decarbonisation Coalition.

Decarbonisation can be achieved by reallocating capital from carbon-intensive firms in each sector into more carbon-efficient companies. This could have positive effects on returns not only for pension funds but also for insurers, banks and other financial institutions, provided they are aware of how to measure and manage carbon risk.

A mandate to act

Carbon was once considered a nebulous risk factor, difficult to integrate into financial analysis, if even relevant to investors at all. So why are mammoths of the pension industry now committing to carbon risk reduction?

It started in 2005 with a report by law firm Freshfields entitled A legal framework for the integration of environmental, social and governance issues into institutional investment. It was commissioned by the United Nations Environment Programme Finance Initiative in response to a belief that investors were legally prevented from taking account of environmental, social and governance (ESG) issues. The report argued, given the connection between such issues and financial value, integration into the investment process is "clearly permissible and arguably required".

Subsequent studies have built on this, pointing out that to ignore the weight of scientific evidence gathered by the UN's Intergovernmental Panel on Climate Change, and the actions of the political leaders and policymakers to strengthen climate legislation, would be irresponsible and a clear breach of fiduciary responsibility. In a speech in 2014, the UN climate chief Christiana Figueres said the financial industry would be "blatantly in breach of their fiduciary duty" if they failed to accelerate the greening of their portfolios. "Investment decisions need to reflect the clear scientific evidence, and fiduciary responsibility needs to grasp the intergenerational reality: namely that unchecked climate change has the potential to impact and eventually devastate the lives, livelihoods and savings of many, now and well into the future."

In the UK, 2014 guidance on fiduciary duty published by the Law Commission is catalysing action by recommending that where trustees think ESG issues are financially material they should take them into account in investment decision making. 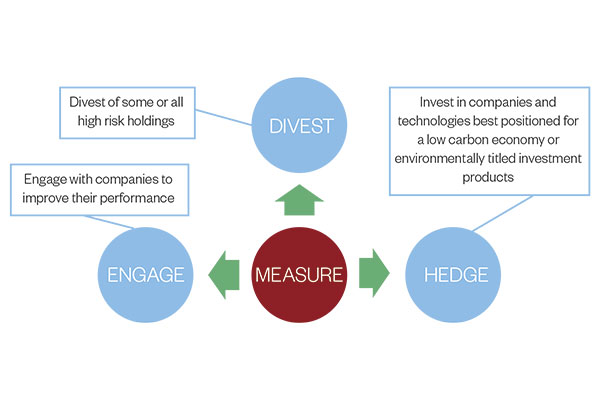 So what are pension funds doing? The first step has been quantifying the carbon exposure of investment portfolios and disclosing it to members. In September 2014, the UN-backed Principles for Responsible Investment launched the Montreal Pledge. It aims to attract $3tn of commitment by investors to measure and publicly disclose the carbon footprint of their listed equity portfolios in time for the Paris climate conference. It currently has 40 signatories, including: the US pension giant CalSTRS; France's ERAFP; Alliance Trust and the Environment Agency Pension Fund in the UK; Nordea in Norway; PFZW in the Netherlands and Australia's Local Government Super Fund.

Carbon footprinting enables investors to quantify the carbon content of a portfolio by allocating the carbon emissions of a company to a portfolio on an equity ownership basis. For example, if the fund owns 1% of Shell, then 1% of Shell's carbon emissions can be attributed to the fund. This provides a quantified assessment of the tonnes of carbon the fund is exposed to and this can be expressed per million pounds of investment to give a carbon intensity metric. It is useful to compare this to an appropriate benchmark, to determine whether the fund is more or less exposed to carbon risk than average.

Traditional portfolio analysis enables investors to see if the reason a portfolio has a low carbon footprint is because it is underweight in carbon intensive sectors and/or is owing to picking companies that are more carbon efficient than others within their sector. Active managers should be able to identify these firms and this would show in the carbon footprint analysis of their portfolios. Pension funds can then use the information to identify holdings, managers or regions that present significant carbon risk and engage with the company or their investment manager to reduce that risk.

Ideally, disclosure of a carbon footprint should be accompanied by a carbon risk management strategy. When considering how to reduce carbon risks in investment portfolios, there are broadly three options: divest, engage or hedge (see above). One simple option to reduce the carbon footprint of a portfolio is to sell high-carbon assets. This is, however, a hotly debated topic. The 2012 release of the Unburnable Carbon report by the Carbon Tracker Initiative sowed the seeds for the 'divestment movement'. The acclaimed report argued valuations of fossil fuel companies are based on their fossil fuel reserves. However, if all these reserves were burnt, it would lead to carbon emissions that would far exceed the scientifically agreed limits required to prevent catastrophic levels of global warming.

It has been estimated that up to $20tn of fossil fuel reserves will need to remain in the ground becoming "stranded assets". This suggests fossil fuel companies are overvalued and present a financial risk to investors. Campaign groups have called for pension funds, university endowments and banks to divest these firms.

Climate change is not the only driver weighing on the ability of fossil fuel firms to sustain their valuations. Decreasing renewable energy technology costs and increasing environmental regulation continue to put pressure on the fossil fuel industry's plans to exploit new reserves. The divestment movement has gained traction, initially amongst university endowment funds such as Stanford University and the University of Glasgow, but increasingly amongst mainstream investors such as the Local Government Super Fund in Australia and KLP in Norway.

While divestment can easily achieve significant portfolio decarbonisation, many investors argue it is not the right strategy. Some are doubtful asset stranding will occur if governments fail to regulate carbon, and others are not comfortable with the volatility in returns that could result from broad divestment from whole sectors. Many investors feel fossil fuel companies have an important role to play in the transition to a low-carbon economy by financing renewable energy.

A positive outcome of the divestment campaigns is that many pension funds are now having to re-evaluate the effectiveness of their carbon management strategy. This is leading them to conduct a robust and transparent portfolio carbon footprint assessment to provide the supporting evidence base.

Engagement with company management offers pension funds and their investment managers the opportunity to understand and influence the long-term strategies of firms. Questions could include asking companies for better disclosure of carbon emissions and plans for moving to less emissions-intensive energy systems. It is important to know how fossil fuel companies plan to structure capital expenditure on new exploration projects, how transparently they are factoring carbon costs into future operations and what that cost is. Investors can then analyse how each company is preparing for a transition to a low-carbon economy. This highlights the need for active managers to be truly active in their consideration of carbon risk.

Hedging carbon risk involves identifying companies that are better placed to benefit from a transition to a low-carbon economy. This could be by selecting firms within a sector that are more efficient than their peers so more likely to be resilient to increasing carbon costs, or it could involve identifying companies, projects or investment themes that will benefit in a more carbon constrained economy. Investors can both reduce the carbon exposure of their portfolios and invest in the replacement technologies of the future. Examples of carbon hedges include investment in renewables, infrastructure for low-carbon transport, energy efficient property or even in farmland and forestry.

Another approach to carbon hedging is through investing in carbon optimised funds. These enhanced passive funds work by holding all sectors in the fund at the same weight as the benchmark, but overweighting companies within sectors that are more carbon efficient than their peers and underweighting those that are less so. This technique offers both stability and a reduction in carbon risk relative to the benchmark of up to 50% without having to apply any exclusions. This is particularly appealing for those pension funds that invest heavily in passive funds and cannot divest or engage.

While there have been great strides by the larger pension funds globally towards measuring and managing carbon risk, there is still much to do. Few smaller pension funds are following suit, and there are still many investment managers and pension advisors who do not understand the importance of the issue. However, the Montreal Pledge, the Portfolio Decarbonisation Coalition and the UK Law Commission have created significant momentum, and, with the larger pension funds leading the way, there is little excuse for others not to act.

One UK pension scheme has asked its actuary to consider how the scheme's management of carbon risk might have financial benefits in the actuarial valuation process. It will not be the last. As the chief executive of the Swedish National Pension Fund, AP4, put it when asked what the biggest risk of its decarbonisation strategy was: "The biggest risk is doing nothing."

What is carbon risk?

Financial institutions such as pension funds and insurers are exposed to risks through the climate change impacts of the companies they invest in. These could affect the profitability of portfolio firms, reducing returns. The risks come from tougher legislation to control carbon emissions, which could greatly increase costs, for instance by requiring firms to pay for emissions allowances or carbon taxes, or forcing them to invest in low-carbon technology. Companies also face physical carbon risks such as flooding and other extreme weather events, which could disrupt business activities and are predicted to become more frequent and severe owing to climate change. Firms in highly carbon intensive sectors such as fossil fuels are at risk of reputational damage owing to negative media coverage.

This article appeared in our June 2015 issue of The Actuary.
Click here to view this issue
Filed in
06
Topics
Environment