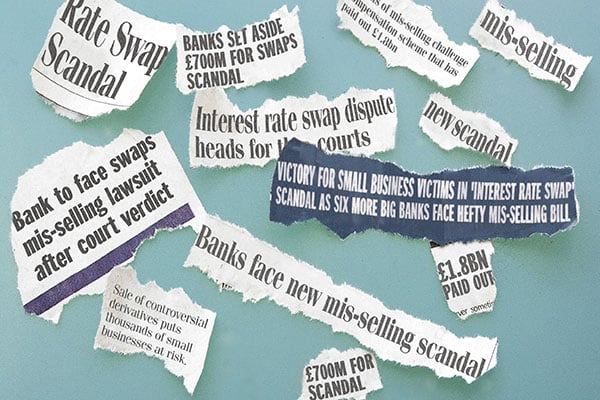 Interest rate derivative or 'swap' mis-selling continues to make the news, both in the UK and abroad - a quick Google search gives many examples. Despite a redress programme from the Financial Conduct Authority, the controversy continues - replacing a swap with a smaller, or shorter term, variant appears to continue to cause resentment. But what is the problem with these products?

In essence, banks heavily sold them with a great focus on the cash flow effects (interest rate risks), but ignoring the market risk. The capital position was only described as a break cost if a client wanted to exit the contract in unfavourable circumstances. The fact that the derivative could or might be used to assess a break in the loan covenant was not discussed in the sale process. The market risk extracted from the client was used by the bank to book a profit.

Products were designed to increase capital value (and also risk) in the event of a recession (and falls in base rate). When the market risk crystallised, the loans that the swaps were sold to 'protect' rendered the overall package unsafe to the bank. The banks were then under pressure to recall the loans. The gap between technical (legal) insolvency for the borrower and inadequacy as a banking loan (plus derivative) covenant is quite wide - this was addressed by using units such as RBS's 'Global Recovery Group', which imposed substantial charges and restrictions. The derivatives in the books meant that it was practically impossible to refinance, so the borrowers were totally at the banks' mercy. Crystallisation of credit risk was cited as the reason.

Much has been made of products sold that were 'too complicated'- but every product can be separated out into its component interest rate floors and caps. Each of these can be considered separately in the light of various risks and benefits described under Basel II. The book Risk Management and Shareholder Value in Banking by Resti and Seroni gives good descriptions of the four key risks: interest rate risk, market risk, credit risk and operational risk - from both borrowers' and lenders' points of view.

Apparently, the former FSA agreed a maximum upfront profit of 0.2% of the loan per year - but such a simple measure disguises the risks of the product being sold. Around 90% of the products sold were 'simple' swaps - but, counter-intuitively, swaps can be more risky than 'complicated' products, owing to their higher volatility.

Details of the agreement between banks and the regulator regarding the redress process were not made public until the end of 2014. Much was made of whether 'the customer expressed a desire for interest rate protection'. Bearing in mind that the derivatives were sold to appear as part of the underwriting process of variable rate loans, (for which the risk was interest rate rises), and borrowers would be keen to appear prudent in a loan underwriting process, eliciting such an interest from a borrower cannot have been difficult. Emails, slides, and anecdotal evidence suggest that this was done.

Far from helping to manage interest rate changes, the derivatives sold made those risks unmanageable. When the recession, already priced into the forward curve, crystallised at the end of 2008, businesses, and, of course, the banks themselves, sustained substantial damage.

The 'swap for a swap' redress agreement has effectively legitimised derivative sales (and their financial cousins - fixed-rate loans with forward-curve-based break costs) through the back door. A continued selling of loan finance with risks deliberately concealed cannot be either ethical or for the long-term general economic good, irrespective of the legal determinations when an increasing number of cases come to court.

Clearly, there are good counter-arguments to this, and they include consideration of the qualities of gilts, debentures, and peer-to-peer funders, most of whose loans are at fixed rates. Mine is a single view, and I welcome disagreement and contributions to a debate that actuaries can considerably inform.

Peter Crowley is an independent actuary. His views represent neither those of the profession nor the profession's Banking Member Interest Group
This article appeared in our June 2015 issue of The Actuary.
Click here to view this issue
Filed in:
06
Topics:
Investment