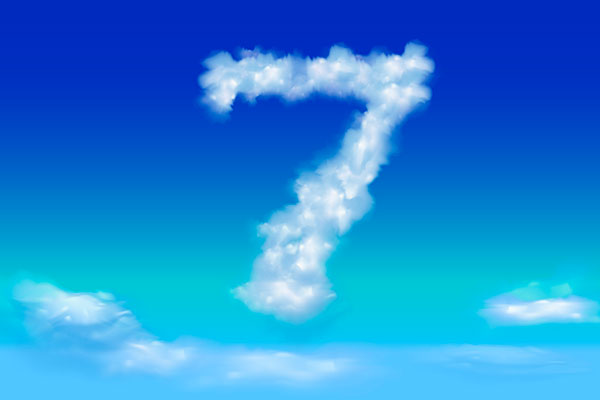 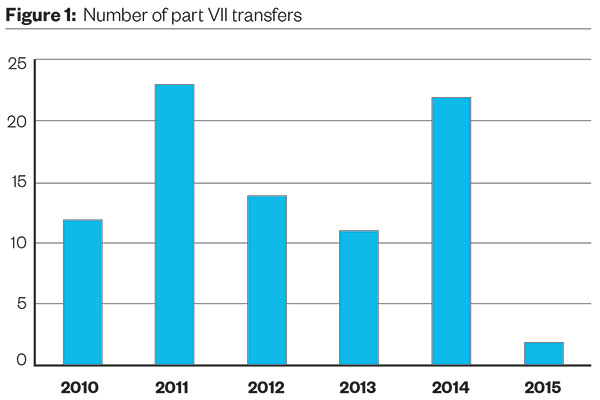 In fact, with so many Part VII transfers planned for this year, there is a danger not all of them will be sanctioned. This is evidenced by a recent letter issued by the Prudential Regulation Authority explaining that, because of other priorities, it may have insufficient resources to progress all of the potential transfers.

A Part VII transfer is a mechanism for transferring a book of insurance business from one legal entity to another where one is UK regulated (or a non-UK insurer with a significant amount of business written in the UK).  The transfer is sanctioned by the High Court of England and Wales or the Court of Sessions in Scotland under Part VII of the Financial Services and Markets Act 2000. Although policyholder approval is not needed for a transfer to be approved, one requirement is for an independent expert to be appointed to opine on whether a proposed transfer will materially disadvantage any of the affected groups of policyholders.

Figure 2 shows some interesting trends on the reasons for Part VII transfer since 2009. The analysis relies on the reports produced by independent experts. 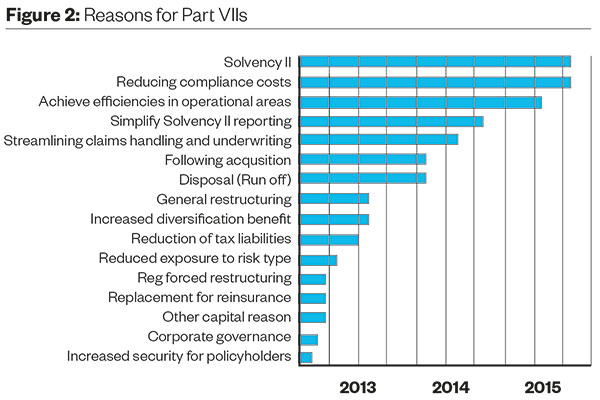 One conclusion to be drawn from these figures is that, although only 47% list Solvency II as a driver, a number of the other explanations may implicitly relate to the new regulatory regime. For example, some insurers citing regulatory-forced restructuring, increased diversification benefit, and reducing compliance costs as drivers may well be referring to Solvency II.

The most common reason cited for Part VII transfers is to reduce compliance costs. This reason tends to apply to internal transfers since, by combining business into fewer entities, there may be fewer reporting requirements, fewer systems and processes and lower personnel costs.

Taking a closer look at how the drivers have developed over time, we can see that the number being conducted for this reason is rising (figure 3). 2014 saw 42% of transfers citing a reduction in compliance costs as an explanation. This supports the hypothesis that the advent of Solvency II is behind many of the transfers' drivers. 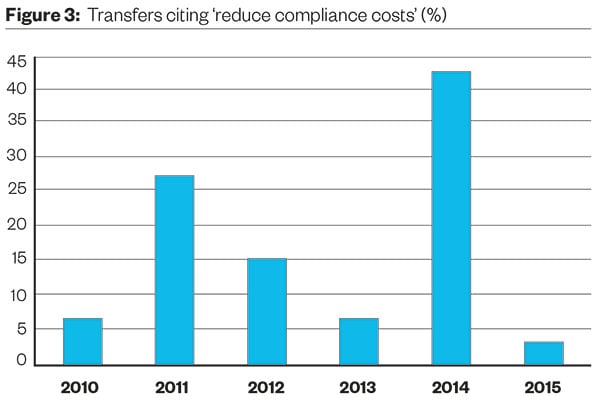 A significant number list Solvency II more explicitly as a driver. In fact to some degree, the ups and downs in the process of introducing the new regime can be tracked through the number of reports listing Solvency II as a reason (figure 4). In 2011 and 2012, there was a sharp increase in transfers that were driven by Solvency II. However, after the launch date was delayed in late 2012, it is noticeable that 2013 saw a significant reduction in the number of transfers citing Solvency II. This reconciles with our experience that firms were less proactive in their preparations for Solvency II at that time.

Once the launch date was finalised in early 2014, a flurry of activity followed as insurers ramped up their preparations. This can be seen in the sharp increase from four transfers citing Solvency II in 2013 to nine in 2014. Many referred to business being relocated in order to be more capital-efficient under the forthcoming regime. 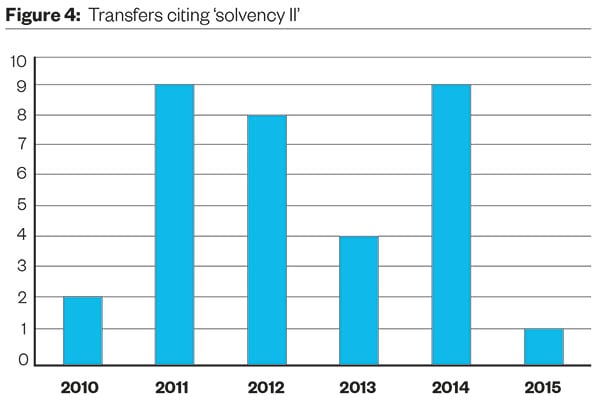 Disposing or finding better placements for run-off businesses has always been a common theme of Part VII transfers and this continues to be the case (figure 5). We suspect that many of the more recent transfers citing this are being driven by the capital, governance and reporting requirements being introduced by Solvency II. Disposing of a block of business in run-off has the potential to materially improve an insurer's position in all these areas. 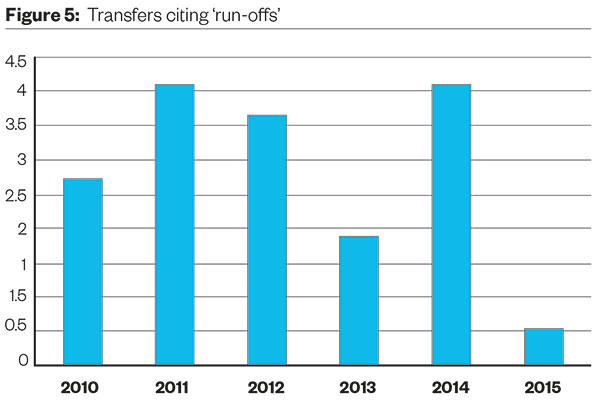 Of course, Solvency II is not the only reason insurers may decide to dispose of a portfolio in run-off. There have also been and will continue to be occasions where a run-off portfolio simply does not fit an insurer's business plan going forward and is subject to a Part VII transfer for that reason.

One reason behind Part VII transfers that has significantly increased in frequency over the last year is the desire to increase diversification benefits. In 2014, six transfers cited this as a driver. Given that, in the previous four years, only two transfers had mentioned this reason, this represents a noticeable increase.

It seems likely that this trend is being driven by Solvency II since, under the new regime, an insurer structuring its business in such a way as to maximise diversification benefits can materially reduce its regulatory capital requirements.

Of course, not all Part VII transfers are driven by Solvency II. The third most common explanation is improving operational efficiencies. 42% of transfers since 2009 suggested this as a reason. In addition, the streamlining of claims handling and underwriting capabilities has been identified in 27% of cases. Naturally, as books shrink or close, running them becomes relatively more onerous and costly, which can result in such books being subject to a Part VII transfer.

A significant number of Part VII transfers are undertaken following a merger or acquisition. These arise because, following the transaction, the resulting entity may be left with a portfolio that is not core to its plans, or with a structure that is operationally inefficient or too capital intensive. In these circumstances, the insurer may use Part VII transfers to dispose of non-core business or to move to a more appropriate and capital efficient structure. The former will be achieved by a transfer to an external insurer while the latter will be achieved by moving business between different entities within the same group.

21% identified that the transfer is being undertaken following a merger or acquisition. However, this may understate the true percentage as a number of the other explanations could also relate to "tidying up" following a transaction. Examples include general restructuring, achieving operational efficiencies, streamlining claims handling and underwriting, and reduction of tax liabilities.

As we have seen, a significant proportion of recent Part VII transfers appear to have been driven either explicitly or implicitly by the forthcoming Solvency II regime. There are signs that this could result in a bottleneck as insurers scramble to achieve transfers ahead of the introduction of Solvency II. Indeed, the regulator has already fired a warning shot to those considering transfers that they may not all be sanctioned this year.

Will 2016 see a substantial reduction in the number of Part VII transfers? We doubt it for a couple of reasons. Firstly, when Solvency II goes live, it is likely to leave many insurers with structures that are inefficient from an operational or capital perspective. Such firms could turn to Part VII transfers as a mechanism through which they can optimise their structures and capital requirements. In addition, such transfers will continue to be required for more "business as usual" activities, such as corporate restructuring, and mergers and acquisitions.

Part VII transfers appear to be here to stay.