Solvency II allows recognition of expected future profits on insurers balance sheets, and, as a consequence, some may expect a reduction in value in force monetisation transactions. But they can still be attractive, say Craig Gillespie, Chris Lewis and Scott Mitchell

Value in force (VIF) monetisation transactions - arrangements that allow insurers to exchange expected future profits for a capital sum today - have been utilised by life insurers for more than 10 years, with recent periods in particular showing ever-higher levels of market activity. Solvency II will focus minds more firmly upon the need to optimise an insurer's capital, liquidity and risk positions. VIF monetisation is likely to remain one such viable option to help achieve these objectives.

These transactions, in their simplest form, allow insurers to cash in the future value expected to emerge from the run-off of a life insurance portfolio. Capital suppliers typically extend a lump sum amount to the insurer at outset, based on an agreed price, which in turn is influenced by their own views on the future value. There are a number of ways this can be achieved with varying degrees of complexity. The most common arrangement observed recently has been full quota-share reinsurance with an upfront commission payment to the insurer. Alternative methods include contingent loans and securitisations.

An insurer interested in exploring VIF monetisation must, as a first step, carefully consider the portfolios of business that it has available as the basis for a transaction.

A primary requirement is that there is a sufficiently large amount of VIF in the portfolio to make the transaction worthwhile for all counterparties. Secondary considerations focus upon the risks underlying the portfolio. Portfolios are likely to contain a mix of product types, each with their own combinations of demographic, behavioural and market risks.

The extent to which these risks can be transferred as part of a VIF monetisation will depend mainly upon a provider's risk appetite. Generally there has been robust provider interest in the area from reinsurers, investment banks and private equity houses. Each provider will have specific expertise in assessing some or all of the risks underlying portfolios considered for VIF monetisation.

The provider's risk appetite will to some extent determine both feasibility and appeal of the transaction terms to the insurer. It may be the case that in order to secure the most attractive terms the transaction may be structured with multiple counterparties, each assuming the run-off of different risks.

Flexibility in the final structure of a VIF monetisation must be balanced in light of the execution risks that accompany any large transaction. As such, the importance of engagement with regulators and auditors to assess acceptability of any such transaction cannot be underestimated. Capital suppliers will aim to complete comprehensive due diligence prior to execution in order to fully clarify the risks being transferred under the structure.

Prudent regulatory reserving and capital regulations have been a consistent driver of demand for VIF monetisation solutions worldwide. For example, in Europe, existing Solvency I rules fail to recognise the VIF asset on an insurer's balance sheet, making a monetisation very compelling in order to allow the insurer to access and utilise this asset. Solvency II rules due to take effect in 2016 will recognise the VIF asset as core tier-one capital, perhaps removing some of this impetus for completing a VIF monetisation. While this undoubtedly acts to dampen interest, there remain several other key reasons for continued use of VIF monetisation.

Effects of market turmoil have previously driven insurers' interest in VIF monetisation, and demand in future may still arise from such circumstances. While the VIF asset will be recognised under Solvency II, it is inherently volatile and can be affected by market turmoil, for example, falls in unit funds directly reducing the value of fund management fees.

This places insurers in a position whereby the VIF asset diminishes in value at the same time as the need for capital may be greatest. Monetisation remains a valid approach to stabilise the value of the asset and aid management of economic capital positions through partial solvency capital requirement (SCR) relief.

The stability brought about by VIF monetisation is usually achieved through the upfront payments taking the form of a relatively more liquid asset than the VIF itself. Liquidity enhancement is another driver of demand as it may allow the insurer to deploy these liquid assets more strategically to grow its business. This may be either to fund organic growth of new business sales or inorganic growth through mergers and acquisitions activity.

As insurers develop their business across product lines and amass portfolios of in-force liabilities, VIF monetisation can be used as an efficient means of achieving scale in risk transfers of complete portfolios.

This warehousing approach can be considered as a substitute for more traditional reinsurance programmes that provide risk transfer at point of sale. It may be particularly useful where an insurer ceases to write a certain product or becomes saturated with an accumulation of specific risks.

VIF monetisation allows the insurer to achieve risk transfer, recognising the value of the portfolio while allowing the insurer to maintain the relationship with the underlying consumer. Other areas of Solvency II present interesting opportunities:

? Contract boundaries indicate that where a contract is subject to some review or alteration at a known future date, the insurer may be unable to recognise associated economic value of the business beyond this. VIF monetisation may be a solution, allowing insurers to manage this issue and recognise value beyond contract boundaries that would otherwise be lost.

? Ring-fenced funds may also limit the degree to which a VIF asset can support liabilities in other funds, whereas other assets may be more easily transferable. For example, some mutuals could be subject to restrictions as a result of applying the Prudential Regulation Authority's recent Supervisory Statement SS1/14.

There may also be further restrictions on portfolios that are subject to the matching adjustment. To better illustrate some of the benefits we have discussed, Figure 1 sets out the Solvency II balance sheet pre- and post- VIF monetisation through original terms reinsurance. 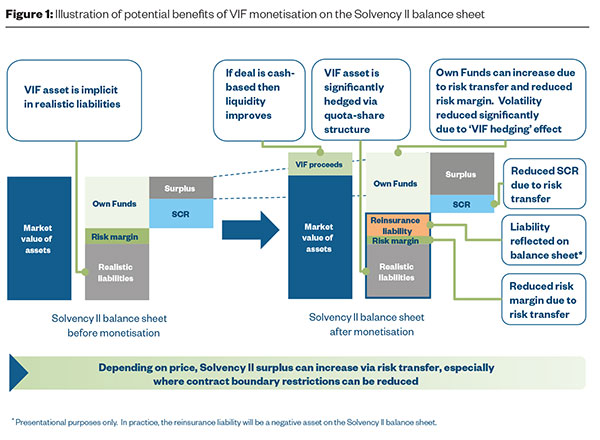 The past few years have featured significant activity across Spain and Portugal driven by pressures arising from the Europe-wide sovereign debt and banking crisis. While the frequency of these transactions has reduced, there has continued to be an active deal flow across other jurisdictions, such as the UK and Ireland. Based on publicly available information, we note three recent transactions (counterparty in brackets where disclosed): Prudential, Royal London 360° (Munich Re) and St James Place (Swiss Re).

VIF monetisation has been a popular capital management tool that has allowed insurers to achieve a number of important business aims - not least, effective management of capital, liquidity and risk. Regulatory change may change things in Europe. However, the many positive drivers, with robust provider interest, are likely to ensure transactions continue.

Craig Gillespie is capital solutions actuary at Swiss Re in London. Chris Lewis is a consulting actuary, and Scott Mitchell a principal, in Milliman's life insurance practice in London

This article appeared in our April 2015 issue of The Actuary.
Click here to view this issue
Filed in
04
Topics
Risk & ERM