Otto Thoresen, newly appointed chairman of the National Employment Savings Trust, talks to Richard Schneider and Helen Lau about the many challenges facing the pensions industry 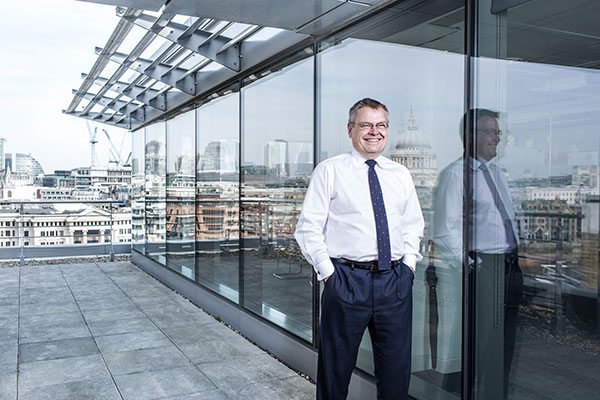 Congratulations on the new role. How is it going?

It's going very well. Since I joined, I've been taking the time to get to know the organisation well and the people within it. I've travelled to India to meet the Tata consulting team, who do a lot of work for us on service delivery and the technology side of things.

After five weeks, I've got a good feel for what our objectives are. The thing that has really struck me is the positive attitude and energy of all the people here. Everybody thinks about the auto-enrolment pension reform agenda and the role the National Employment Savings Trust (NEST) has to play.

How do you find the move from representing industry to working for a government body?

As chairman of the board of trustees, I have to look after the members' interests, so I don't feel that I work for the government. Of course, the government has got a very healthy interest in what we do and how we do it.

I've had a number of previous roles that brought me very close to government. In 2008, I did an independent review for the Labour government on how to provide generic advice, which actually led to the creation of the Money Advice Service. My role as director-general of the Association of British Insurers (ABI) was one that brought me into contact with senior ministers from different departments almost every week. The mixture of skills that gave me is quite a good basis on which to step into a world like this.

Do you see NEST as being a rival to private pension providers, or more of a public service filling any gaps left by industry?

I think you have to start with the public service obligation, which is what NEST was created to fulfil, and that's about making sure that pension reform could work. You couldn't make the reform agenda work without a confident answer to the question: "Are all employers going to find someone who will provide the pension arrangement that they need?" NEST's existence means that can happen.

What's also been happening though, is that, because of the particular focus NEST has on making pensions accessible to people who previously would never have thought of pensions as being part of their world, there are many areas where it has shaped the market. Communication, for example, by promoting simplicity of language and reducing jargon; investment in technology that makes it easier for employers to get on board without paperwork getting in the way of the process; pricing, where the annual charge across the defined contribution (DC) market is now down to roughly 50 basis points, which wouldn't have happened so quickly without NEST. There are many ironies about my appointment as chairman. Back at the time of the Turner Commission, I was very much part of the conventional pensions industry, thinking that it could deal with reform on its own.

One could speculate over what would have happened had NEST not existed. On the wall we have a timeline showing the staging requirements for small and micro-employers who over the next three years will enter the auto-enrolment process. These are the people that we're talking about, who have never been involved in the pensions market before, and NEST is a critical part of making that market work.

So there has been a significant impact of NEST on the market as a whole, while it is fulfilling its public service obligation. I think there are very challenging times ahead for the pensions industry and for the pension reform agenda - for example, in ensuring adequacy of contribution levels - so we should resist the temptation to declare victory. I sense another chapter opening in pension reform, and in NEST's future, and I'm really excited about having the opportunity to be part of it.

How can NEST cope with the growing number of employers coming on board?

The amount of scaling up is not such a demand for NEST, because of the self-service pension concept. This means we can rely on the existing technology that is already built and widely used by our clients. The key is to remain flexible in our approach and make sure the solutions built are adaptable to those who are not yet on board.

Through discussions with our employers we have created a brand new solution, NEST Connect, which allows a delegated third party, such as the employer's accountant, who has a greater familiarity with the scheme, to do the administration. It is a great process that allows flexibility, achieves greater slickness in the process for employers and makes their, and our, jobs easier.

To what extent do you look internationally in shaping your strategy, for example Australia, where a similar scheme includes income protection and other benefits?

We spend a lot of time looking across the world at the different pension solutions that exist. Thinking ahead to the world post the budget reforms that come into effect shortly, as a matter of course we would look at the different ways other countries are dealing with this.

Our chief executive is actively involved in a number of forums internationally, where he gets to represent the UK, but also learns about what other people are thinking in trying to address these things. So considering how to extend the model from pension saving to other parts of social welfare is important, but we have to focus on the immediate challenge.

We have to deal with the thousands of small and micro-employers who go through staging over the next three years, and then to start to think about how we can encourage employees to begin to save more for their long-term retirement needs.

You mentioned the pension reforms announced in last year's budget. What was your initial reaction when you heard the chancellor's speech?

It was a complete shock to the insurance industry and to everybody, I think, although there were many components that we had anticipated in the industry. For example, the raising of the level below which you could take advantage of trivial commutation, effectively taking cash instead of pension, has already been argued for by the industry. What was different was that the regime that had been in existence was being removed, and it was not at all clear what was going to take its place.

One thing very clear today is that the annuity itself was designed for a very different time, a time when interest rates were higher and people didn't live as long as they do now.

There was a fundamental challenge to the construction that forced people into fixed income investment, on the basis that they couldn't revise their investments for a 30-year period, and took on the costs of providing longevity guarantees for 30 years ahead. What we should have been doing was thinking about how annuity products needed to evolve to be sustainable and effective in today's world - that is something the industry should have done more quickly.

Sadly, most of the pot sizes of people retiring from DC in the next 12 months will be fairly small, and, mostly, taking cash will be the best thing to do. If you look through that to the pension reform generation, they are going to arrive at retirement with larger pots and still wanting certainty of being able to cover their long-term income requirements.

So the idea that you can just switch people onto the drawdown solution isn't going to be enough.

There is clearly a need for retiring DC members to have a high-quality, default option. NEST recently ran an international consultation process around what retirement solutions should look like going forward, and based on this we have published six guiding principles. These include recognition that living longer than expected and running out of money is the key risk in retirement, the need for stable income in retirement, and so on. We'll be doing a full report on the consultation later in the year.

(Laughing) It's not quite the same, as we won't be asking people to make debt investment decisions for the 30 years before they die. In the annuity world, because you are making an investment guarantee over 30 years, the regulator demands, reasonably, that you carry solvency capital to cover investment risk, which is another drag on the return that you can offer. The market needed to change, but as yet the market hasn't decided what the solutions are.

So is NEST looking to enter the retirement income space?

What we're saying is that everything we've done in this organisation is based on understanding the needs of employers and their employees, and then building solutions that are designed to meet those needs. There is a fantastic opportunity to take our well tried-and-tested marketing methods and apply them to retirement income.

We're not saying that NEST should be out there offering retirement solutions, but we have a responsibility to our members to make sure that when they get to retirement, options are available to them which meet their needs, like transfer of longevity risk.

What has been NEST's greatest achievement to date?

Building the enterprise. The Turner Commission suggested that the industry was able to deliver all pension reforms, but this was evidently proved too difficult, and as a result a new enterprise, NEST, had to be built.

The development of a new company from scratch is always difficult, not to mention the time constraint we were faced with in complying with the pension reforms. However, thanks to good project management, not only was NEST built in a minimalist way, it also built reliable technology to sustain the portal of 1.9m employees and 13,000 employers. If you build a pensions company from scratch in two years, that's outrageous. What we did was impossible. We must not credit ourselves too early though, because the next few years are crucial as we expect more employers to come on board to NEST. The current numbers look small when you consider the level of activity coming up in the auto-enrolment space - 45,000 employers this year and 45,000 employers a month next year. It's mind-boggling.

As an actuary yourself, do you think we do enough to ensure positive customer outcomes?

Early in my career I was lucky enough to have opportunities to get involved in marketing and product brochure writing.

I was able to utilise my skills of translating a complex problem into consumer terms. Explaining and communication is always complex. Actuaries need to do more of this to ensure positive outcomes for the customer. I'm also involved in pension and long-term care research. Few professions can get involved in matters of social policy. Actuaries tend to fear speaking out - it comes with experience, so we need to start now and be more involved in these matters.

What do you do when you're not helping people to save for their retirement?

I am a trustee on the board of a charity called Young Enterprise, which helps school kids think about the world of business, and prepares them for the working environment.

I am also involved in a charity called Step Change, which provides debt advice to individuals. Being Scottish, I have a passion for golf, and play every Saturday come rain, sun or snow. I have a handicap of 9.9 which I'm working on. I also have a personal trainer who beats me up twice a week!

This article appeared in our April 2015 issue of The Actuary.
Click here to view this issue
Filed in
04
Also filed in
Interviews