Instead of pension and life funds acting as economic stabilisers, they are compounding instability in financial markets. Ashok Gupta explains why a more long-term approach is recommended by a Bank of England study 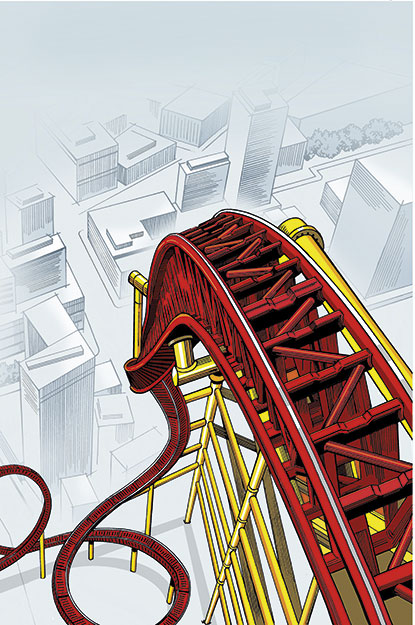 The effective mobilisation of savings is vital to provide a decent income in retirement for a rapidly ageing population. It also has the potential to supply much needed long-term finance for industry and infrastructure.

Life assurers and pensions funds are a crucial link in this chain, but to be effective they must be able to invest over the long term. This means investing through economic cycles and with an ability to ride out short-term volatility in market prices; by doing so contributing to market stability.

But a recent Bank of England report (Procyclicality and Structural Trends in Investment Allocation by Insurance Companies and Pension Funds) has found our institutions are failing in this. It suggests they have adopted procyclical, short-termist approaches, which have amplified market volatility and reduced the amount of long-term funding available for industry and infrastructure. In doing so, they have been following accounting and regulatory methodologies inconsistent with the longer-term ambitions of the industry and their role in the economy.

In this way, they have made it significantly harder for our economy to emerge from what has probably been the deepest depression on record.

The report is the result of a two-year study by the Bank of England carried out in conjunction with industry, regulators and academia. This study was guided by a working group, chaired by Andrew Haldane (then director of financial stability) and comprising leading actuaries, industry professionals and economists with experience across life assurance, pensions, investments and capital markets.

A key empirical observation is that life assurers and pension funds' investment risk bearing has declined dramatically in recent decades. While some of this can be explained by the decline of defined benefit pension schemes and with-profits products, the reduction in risk bearing is too great to be explained purely by these factors.

The proportion of investments held directly in equities by UK insurance companies and pension schemes has more than halved since the late 1980s, (see Chart 1, above), with only part of the reduction being offset by indirect holdings of equities held within mutual funds. There has been a reduction of almost a half in holdings of equities by pensions funds over the past 20 years, from approximately 70% to close to 35%.

Most of the reduction has occurred over the past decade, since accounting standards and regulations based on market prices were introduced. This is clearly evident from Chart 2 (below), which shows holdings of equities by non-linked insurance funds, and demonstrates a significant reduction around the time of the introduction of market-based 'realistic' regulation.

Haldane's report also revealed evidence that excessive reliance by the industry, regulators and accounting bodies on mark-to-market and other short-term measures has exacerbated the impact of the economic crisis by encouraging life companies to act procyclically. 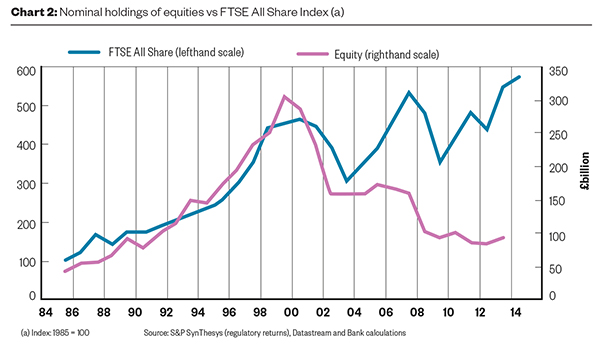 The consequences of procyclicality are particularly serious. 'Procyclical' investment has the effect in the short term of exaggerating market movements, or in the medium term of creating higher peaks and deeper troughs. This is exactly opposite to how these institutions might be expected to behave; acting as important countercyclical balances helping to control and moderate market volatility.

Procyclicality can arise when liability valuations are less sensitive to market movements than asset valuations. Capital resources will, of course, then increase during periods of rising prices and decrease when asset prices fall. If capital requirements do not increase so as to absorb such increased capital resources, insurers may feel 'capital rich' and, as a result, use such excess capital to make further risky investments, contributing to procyclicality. Clearly, the opposite happens in downturns. As a result, market-based capital regimes can contribute to 'risk-on' in upturns and 'risk-off' in downturns, exacerbating system-wide procyclicality.

The study identifies evidence of procyclical behaviour by insurers in a number of countries, including the UK. This evidence was stronger in the 'dotcom' crash of the early 2000s than the recent crisis, which may reflect the reduction in risk appetites between the two crises and an absence of data on derivative usage.

Evidence of procyclical behaviour among occupational defined benefit (DB) pension funds is mixed. Some short-term countercyclical behaviour was observed, most likely reflecting automatic rebalancing of investment mandates. However, the overall trend was one of continual disinvestment, which may have contributed to instability during the crisis. What is clear is that, unlike local authority schemes, occupational DB pension funds did not take advantage of the chance to acquire cheap assets during the crisis.

Perhaps some of the strongest evidence of procyclical behaviour derives from the widespread use of regulatory forbearance during the recent crisis by both the Financial Services Authority and the Pensions Regulator. While regulatory flexibility may have tempered procyclical behaviour, it is applied on an ad hoc basis and suffers from various flaws. Its application is asymmetric across firms and over time, benefiting weak firms more than strong ones and easing requirements in times of stress but not requiring larger buffers in more benign environments. Moreover, firms cannot anticipate it and by the time of its introduction, much damage will have already occurred.

Significant industry herding by DB pension funds is also identified in the report. The rush by funds into index-linked gilts has resulted in market distortion, suppressing yields on 20-year index-linked gilts by as much as 165 basis points (bps). This in turn inflates pension deficits. This herding most likely derives from industry practices regarding the use of investment consultants and asset managers.

Much of the above is driven by two fundamental misreadings of the risks to which long-term investors are exposed.

The first is to do with liquidity. The liquidity needs of many long-term savings products are low and predictable, as, for example, in the pattern of pensions being drawn down gradually over many years. However, current regulation, under which assets and liabilities are valued by reference to current market prices and interest rates, imposes liquidity requirements for providers far in excess of the products' natural needs. Under current accounting, companies must hold their pension deficits on their balance sheets, utilising mark-to-market principles that cause these deficits to be highly volatile. Efforts to reduce this volatility can have a heavy cost ultimately borne by companies, their shareholders and, potentially, pensioners.

The second key misreading relates to the focus on market volatility in measuring risk. This approach fails to make the necessary distinction between investment risk (the risk of permanent loss in the value of investments), which is the primary risk for long-term investors, and market risk, which is typically a function of short-term market volatility.

After prices have fallen significantly is often a good time to buy - when the investment risk is relatively low, even if the absolute amount of price volatility is high. Yet this is precisely when mark-to-market principles make it hard for long-term institutions to buy equities - because a period of high volatility is thought to be a period of high 'risk'. In fact, as we know, the riskiest time is often when market values are high and volatility is exceptionally low.

A stronger and clearer distinction between market risk and investment risk would lead to better risk management, more usable capital and longer-term investment.

What else can be done?

Countercyclical capital buffers would help, and further consideration of these is recommended in the report. Buffers are only effective if they can be released in times of crisis without having to replace them. So buffers that are larger in good times and smaller in bad times would help reduce procyclical behaviour and support long-term investment risk bearing throughout cycles.

While defined benefit pensions, with-profit policies and annuities are in decline, we still have a large stock of such products that will take several decades to run off. And the fundamental need for our institutions to bear investment risk on behalf of customers remains and may even increase post pensions liberalisation. So we, as a profession, need to rise to the challenge through designing better products and finding solutions to industry herding, DB pensions consolidation and more.

As we struggle to emerge from the economic crisis, the potential of pension and life funds to mobilise long-term capital and smooth the economic cycle has been undermined by industry practices, regulation and mark-to-market accounting. Pension and life funds are behaving like banks, compounding instability. The Bank of England study highlights the need for fresh thinking to promote long-term savings and investment.

For Procyclicality and Structural Trends in Investment Allocation, click here.

Ashok Gupta was joint vice-chair of the Bank of England working party. He is chairman of AA Insurance Services

This article appeared in our March 2015 issue of The Actuary.
Click here to view this issue
Filed in:
03
Topics:
Careers