Back from the brink

Andrew Duguid talks to Gemma Gregson and Helen Lau about the near collapse of Lloyds, putting actuaries on the map and the importance of change and innovation 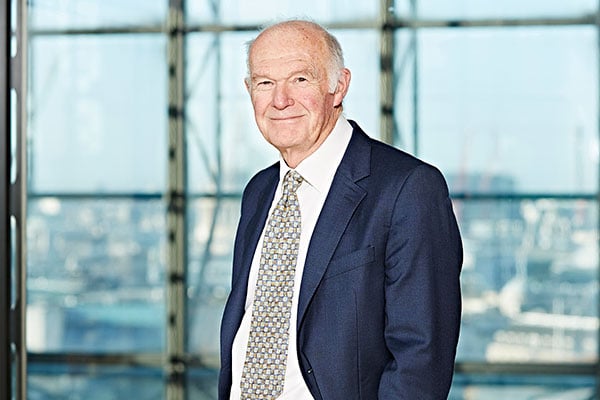 In the 1990s, Lloyd's of London teetered on the edge of collapse. Insider Andrew Duguid tells the story in his book, On The Brink. It is a story of mismanaged liabilities, large losses, strong leadership and a creative recovery plan. He talks about the events that led to the crisis, the subsequent recovery and the lessons that were learned.

Can you tell us about your background?

I am a graduate of the London School of Economics and after that I did an MBA at Lancaster University. I worked in the advertising and marketing industry for a few years and then decided I didn't want to do that all my life. So I joined the civil service in the Department of Trade and Industry where I had some exciting and interesting jobs, including three years at Number 10 Downing Street. After 14 years working for the civil service, I got a phone call asking if I would be interested in working for Lloyd's. It was a lot more money and sounded quite interesting, so I took the job and came to Lloyd's in 1986, at a time when the problems described in the book were not obvious.

When did the problems first come to light?

In 1991, Lloyd's declared a loss for the first time for 20 years. Lloyd's had an unusual structure because capital was not provided by shareholders, instead it came from private individuals known as 'Names'. They traded with unlimited liability, meaning that everything they owned was at risk. When their syndicates started making losses, some Names found they had big bills to pay, as much as £1 million in some cases. This was a lot of money and a lot of the Names were not happy, so they decided to sue the agents who operated on their behalf.

Why were some syndicates making a loss?

The losses came from two main sources. The first was old policies written in the US which gave general liability protection. Claims on these policies arising from asbestosis and pollution clean-up mounted alarmingly. Some policies were written directly by Lloyd's, others were reinsured by it. In addition, certain syndicates at Lloyd's had taken on all the old liabilities of others in return for a premium, which they invested in the hope of making a profit at a time when investment rates were high. When the claims related to asbestosis and pollution started escalating, the losses were especially concentrated on a couple of syndicates.

The second main problem was a phenomenon known as the 'London Market Excess of Loss' (LMX) spiral. Some syndicates took out excess of loss policies with other syndicates, who in turn took out reinsurance with others and so on. This left some syndicates 'holding the baby'.

In the late 1980s, there were several catastrophe events such as the Piper Alpha disaster, the Exxon Valdez pollution, plus a couple of hurricanes that all created big claims which rippled around the system. Again, the losses ended up being concentrated on a handful of syndicates, owing to a lack of monitoring of aggregate exposure.

How did Lloyd's tackle the problem?

In 1992 a new chairman, Sir David Rowland, was brought in to help Lloyd's find a way through the crisis. They also recruited a new CEO, Peter Middleton, who had previously been a diplomat. Middleton was an interesting character and, having had nothing to do with the events leading up to the crisis, he was just what was needed as he sympathised with the Names. Middleton left after three years and was replaced by Ron Sandler, who took Lloyd's through the recovery.

What were the main elements of the recovery plan?

There were three intertwining pillars of recovery. The first was a settlement offer to the Names. The final deal that was agreed involved £3.2 billion of debt written off, with losses faced by each individual capped at £100,000 so that the people with the biggest losses gained the most.

The settlement offer was made more palatable by the second element of the recovery, which was the creation of a reinsurance vehicle called Equitas, allowing Names to resign. All the Lloyd's liabilities up to 1992 were reinsured by Equitas, which paid out claims, managed the £15 billion of assets that were paid over and also claimed back reinsurance from other companies.

It did a great job under strong leadership. After 10 years of operation, Equitas was bought by Warren Buffett's Berkshire Hathaway. This was an excellent outcome for Lloyd's as there was always a fear that Equitas would run out of money. All that became academic with Buffett, a billionaire, backing it. With a subsequent transfer of all remaining liabilities to a Berkshire Hathaway subsidiary, the slate was wiped clean for the Names and for Lloyd's.

The final aspect was to bring in new, corporate capital. This was possible because the existence of Equitas meant that new investors coming in were buying into a clean market and not taking on old problems.

What role did actuaries play in the recovery?

Actuaries were used to calculate how much money was needed by Equitas. The regulator needed to approve this new insurance company and a credible answer had to be provided. Tillinghast, the actuarial firm, had to sign off on it and the Government Actuary had to approve it too, so it involved a lot of actuarial input. Up until that point, actuaries hadn't really been used in non-life areas, but the work on Equitas changed that and really put actuaries on the map in the London market.

What inspired you to write the book now?

Having lived through the crisis, I'd always been conscious that some extraordinary events had happened and that it was a dramatic story. It was in the back of my mind that when I retired I might write about it.

One day I received a phone call from David Rowland, the chairman over the period, who was trying to get an academic to write a book about the experience. He asked me if I would help the academic find his way around some papers we had produced in 1997 when we had the idea of capturing knowledge about the crisis. Later the academic dropped out, and having become interested in the idea again, I volunteered to write it.

What do you hope people will take away from reading it?

The story is one of mistakes made and lessons learned. Those lessons are wider than just technical insurance issues and can also be applied outside the insurance market.

It is about overcoming a big problem with successful leadership, combined with the knowledge of experts - actuaries, lawyers and management consultants - who integrated with the management team. Negotiation was also critical to the outcome, as was a leader on the side of the Names. He was key in selling the settlement deal to them.

How does the Lloyd's crisis compare with the recent financial crisis?

With the LMX spiral, people didn't fully understand what they were getting into and where the liabilities were ending up. This is similar to the banking crisis and sub-prime mortgages where the products weren't understood properly. The lesson is to really know what you are doing when offering exotic contracts.

The government's response to Lloyd's differed from the banking crisis. While they were prepared to work with Lloyd's and authorised Equitas, they didn't get their chequebook out. I think that was because while Lloyd's was important to the economy, it didn't have quite the importance and centrality to the economic system of the banking system.

How can Lloyd's use the lessons in the book to help it face future challenges?

There is a quote by Darwin at the start of the book: "It is not the strongest of the species that survives, nor the most intelligent, but the one most responsive to change." It is what the story is about in a sense, the need to keep changing, adapting and to stay flexible. The structure of Lloyd's lends itself to that and is quite Darwinian in the way that the syndicates and managing agents compete with each other, with some falling by the wayside and others forging ahead.

The story is partly one of what happens without regulation. The challenge is to find a balance between regulation on one side, and innovation and entrepreneurialism pushing the boundaries on the other.

On The Brink: How a Crisis Transformed Lloyd's of London by Andrew Duguid, is published by Palgrave Macmillan.

This article appeared in our February 2015 issue of The Actuary.
Click here to view this issue
Filed in
02
Also filed in
Interviews
Topics
Professional