Marjorie Ngwenya reports on the Lord Mayor of Londons trip to Africa, and the launch of the Certified Actuarial Analyst qualification

During September 2014, the Lord Mayor of London, Alderman Fiona Woolf, CBE (pictured right), led a delegation to South Africa, Uganda, Tanzania and Kenya. Her mission was to promote trade and relationships between them and the UK.

During September 2014, the Lord Mayor of London, Alderman Fiona Woolf, CBE (pictured right), led a delegation to South Africa, Uganda, Tanzania and Kenya. Her mission was to promote trade and relationships between them and the UK.

I was part of the business delegation as a council member of the Institute and Faculty of Actuaries (IFoA). The aim was to further the IFoA's strategic objective to promote the actuarial profession in English-speaking Africa and to spread the word about the IFoA's new Certified Actuarial Analyst (CAA) qualification.

The growth outlook for Sub-Saharan Africa (SSA) is robust and increasingly broad-based with an expectation of 5%-6% pa growth over the next five years or so. Policies and institutions have improved, supporting growth.

Some of these countries are attracting significant foreign direct investment - the UK is an important trading partner in those we visited. Challenges in the various economies include: inadequate access to finance, corruption, poor infrastructure, low education, high inflation, political instability and unfavourable tax regulations. I learnt that two-thirds of the SSA population is without electricity - a real stumbling block for growth.

The Lord Mayor - a lawyer by training - is no stranger to the need for the advancement of education in developing economies. She was complimentary about the CAA's applicability in building foundational professional skills.

We began our journey in Cape Town.

South Africa's government has designed a medium-term strategic framework for the next five years. One primary objective of this plan is to build a skilled and capable workforce to support inclusive growth.

The poor quality of education available to many students limits economic progress. The plan focuses on primary and secondary education as important cornerstones. It also highlights the importance of higher education and the production of skills required by the economy.

The government is looking to form partnerships with industry to build these skills.

Professional bodies and the private sector are well placed to assist.

Our next stop was Kampala. Uganda is highly progressive and equally under-marketed. The proportion of the population financially excluded halved between 2009 and 2013, thanks to mobile money technology.

The lack of professional skills holds back economic development, and the government has embarked on a financial inclusion and education programme. I met the president of the local actuarial society, who described the challenges of trying to qualify as an actuary without the support structures available in larger economies.

Uganda is introducing a risk-based supervisory regime as part of harmonising insurance regulation within the East African Community. As part of this framework, each insurance firm is required to have an 'actuary'. Qualified actuaries are in short supply in East Africa and come at a high cost, so the CAA would provide affordable actuarial skills.

We then travelled to Dar Es Salaam. Tanzania has been fortunate to experience 50 years of stability, and the national elections in 2015 are awaited with bated breath. Unemployment is high, although the country has experienced an average GDP growth of 7% each year in the past decade, and this looks set to continue.

Tanzania is aiming to become a middle-income country by 2025. Transport and infrastructure top government priorities, and there is a need for enhanced social services in education and health. Here, as in Uganda, the profession is young, and the proposition offered by the CAA is valuable in a context of high economic growth.

Our final stop was in Nairobi, where security threats and crime remain a challenge. Kenya's GDP growth lags behind its neighbours' at 4.6% a year. However, in terms of human capital, Kenya ranks higher than its East African peers. There is also greater access to financial services and the M-pesa success story will be familiar.

Throughout the intense and varied itinerary, networking opportunities abounded. Among those who encountered the group on its voyage were the UK prime minister's envoys to South Africa and East Africa, representatives from the City of London, local regulators, ministers, businesspeople and fellow professionals.

My personal highlight of the visit was attending Archbishop Desmond Tutu's Children of the Light premier in Cape Town and enjoying an opportunity to meet the great man. 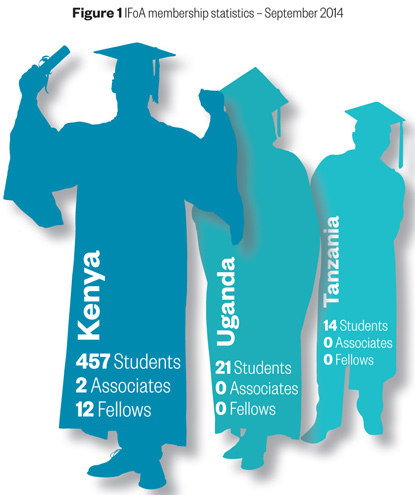 The Certified Actuarial Analyst (CAA) qualification is the first globally recognised membership qualification at the technical level for those working in actuarial support roles and the broader financial services sector. For more information, click here