In 20 years, the roles of life actuaries have altered vastly, reflecting changes in regulations, technical methods and the life insurance market itself. Chris OBrien and David Hughes outline the investigation by the IFoA working party to ask what the future holds 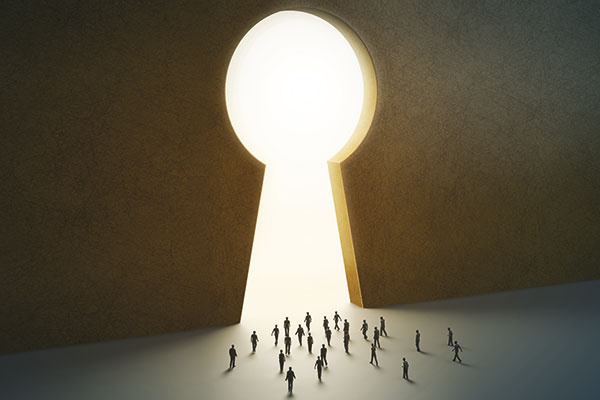 Anyone qualifying as an actuary today and entering the life insurance industry is likely to encounter a whole different set of career opportunities and challenges compared with their counterparts 20 years ago.

Using a combination of analysis of senior roles in life offices, a questionnaire and interviews with senior personnel, the working party has recently completed a review of the changing environment for life actuaries. How are skills requirements evolving as a result? Is the seat on the executive board still within reach? And what effect has the emergence of broader risk functions had on wider actuarial involvement in running life insurance businesses?

The data analysis examined all life offices writing long-term insurance business at end-2012. The survey was sent to the actuarial function holder (AFH) in each life office (or another senior actuary where the AFH was appointed externally) and we carried out 11 interviews, including some non-actuaries. 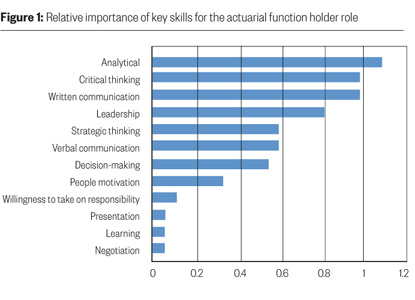 The evidence from the questionnaire survey is that analytical, critical and strategic thinking skills are regarded as highly important for actuaries (see Figure 1). But there was also widespread agreement among interviewees that actuaries have developed new technical skills in areas including financial economics, stochastic modelling and financial projections. Written and verbal communication are also rated as particularly important skills, with interviewees commenting on the importance of communication in providing technical support for business concerns. Leadership skills are naturally a requirement for senior roles, though the difference between management and leadership skills needs to be clearly understood.

Actuaries' contributions extend beyond the actuarial function. The questionnaire results showed that, in the majority of life offices' finance and risk functions, actuaries have a significant representation. They also play a part in other functions, and making a contribution in several areas is consistent with a reputation for having a good understanding of the industry, demonstrating that their financial skills can be employed in a number of applications.

It does appear, as a number of interviewees commented, that at a senior level actuaries are perceived as more siloed, with an increased focus on quantitative skills at the expense of business and management skills. But analysis of senior roles shows that 23% of life company chief executives are actuaries, implying that some actuaries have been capable of acquiring both technical and general management skills. 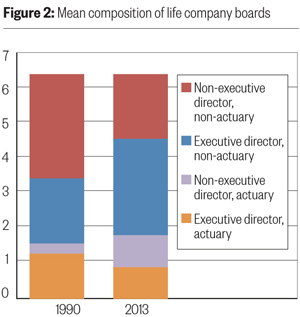 The importance of actuaries for the management of life offices is clear - many are directors and the regulator has specified roles that are reserved for actuaries. Our questionnaire respondents spend most of their time with their senior management group, again indicating the importance of actuaries' contribution. And non-actuary interviewees were complimentary: for example, asked if actuaries provided support in making financial sense of the future, one said, "Absolutely yes, vital within life offices".

However, actuaries are now less commonly found as executive directors. Comparing the 93 life companies in 2013 with a sample from 1990, we found that the representation of actuaries on the board has increased slightly. However, this hides an important change. The number of executive actuaries on the board has reduced and actuaries as non-executives has increased (see Figure 2). This may reflect the way in which, in the past, actuaries were often found in positions such as head of marketing, IT or customer services, whereas such functions are now headed by their own specialists.

One further finding that is worthy of note is the limited number of actuaries working as chief financial officers (CFOs). Several interviewees suggested this role was more suited to generalists, a view corroborated by a CFO actuary who indicated that for those wishing to develop into the area it was beneficial to initiate such a move early in one's career.

More positively, several interviewees commented that actuaries had an important role to play in risk management, a sentiment reflected in the survey with 15 of 23 life office chief risk officers (CROs) who are actuaries.

We found that around 30% of AFHs and with-profits actuaries are consultants, which is higher than the 20% figure of appointed actuaries who were consultants in around 1990. It may be that independence is more highly valued than it was.

Excluding AFHs who are external appointments, the 13% of internal AFHs who are directors is much lower than the 47% of appointed actuaries who were directors in 1992: this may help AFHs from appearing conflicted.

So what do these findings mean for the future roles of actuaries in life insurance companies? The Working Party has put forward four areas where it sees increased opportunities.

 Risk management - actuaries already play an important part here, however the risk function is likely to develop much further under the impetus of Solvency II. There is also a need to develop the skills to operate in roles that go beyond risk measurement. The CRO in particular is in a general management role and actuaries are well equipped to continue the development of risk functions as the roles go beyond risk measurement to meet the requirements of multiple stakeholders.

 Financial analysis and management under Solvency II and International Financial Reporting Standards - actuaries are helping to establish these new regimes. They are also well placed to help life offices analyse, understand and communicate the results given their good understanding of the business, which one non-actuary interviewee said was a strength of actuaries. Two CFO non-actuaries commented that accountants may not fully appreciate the drivers of business, while actuaries are strong on intellect and knowledge of the industry.

 "Big data" - some life offices are experimenting with the myriad of data sources available, particularly in pricing, but it is not yet 'business as usual'. There are issues such as understanding, collecting and structuring the new sources of data and recognising 'behavioural' issues, with which actuaries are less familiar. Although there will be competition from other professionals, actuaries can expect opportunities from applying their skills here.

 Product development - some interviewees felt this was a topical area where actuaries could add value. With knowledge of the industry (and lessons learned from past mis-selling), and understanding the financial drivers of the business, the Working Party felt this was an area in which actuaries could increase their impact in the future.

Based on its findings, the working party believes that the outlook for those who accept the challenges and opportunities will be fulfilling and rewarding. Such achievements, as noted by many actuaries interviewed, are likely to come from actuaries' own personal motivation and skills: beyond the professional qualification, it is an actuary's personal responsibility to develop his or her career.

This article appeared in our November 2014 issue of The Actuary.
Click here to view this issue
Filed in
11
Topics
Life insurance