It has been a busy year for longevity swap transactions. Martin Lockwood asks whether capacity in this market has now been reached, and shares his thoughts on how UK pension schemes can prepare for such transactions

Longevity swaps have become an increasingly standard mechanism for pension schemes to transfer longevity risk to the insurance market. These swaps have been used by UK pension schemes over the past five to seven years and around £45bn of liabilities have been written to date. The recent growth in this market is illustrated in the graph top right.

There are several ways in which the longevity risk of a defined population can be transferred from a pension scheme to another party, however one dominant model has appeared in the market. Typically, the risk is passed from the scheme onto an intermediary - an investment bank or insurer - in the form of a longevity swap, or through the purchase of a buy-in or a buy-out contract with an insurer. More often than not, the insurer then passes the longevity risk onto reinsurers, either as part of the same transaction or at a later date in combination with other deals.

Why has this model become dominant?

This longevity swap model requires the engagement of multiple parties - advisers, insurers, investment banks and reinsurers - in order for the deal to transact. Given that these parties are specialists in different fields, why has this model become the default option?

The attitude towards longevity risk of the two main types of intermediaries is broadly aligned, that is, longevity risk is generally only manageable at lower levels, and so when large longevity deals are written the risk is often passed on. This mechanism is required in order to make writing longevity deals a sustainable business line.

In the main, it is the reinsurers who take on this risk, but while insurers dealing with reinsurers is an obvious relationship, why do investment banks engage with reinsurers? Why not pass the longevity risk through their more conventional channels directly to the capital markets instead?

From the reinsurers' perspective, writing longevity business provides two benefits: some potential financial return, and more importantly, a hedge against adverse experience in existing lines of mortality business, such as life insurance. While the hedge isn't perfect due to differences in the profiles of the two business lines, longevity swaps make a valuable contribution to the sustainable risk management of reinsurers.

From the capital markets' viewpoint, only financial return is of interest; for most investors, the hedge is irrelevant, as they do not have portfolios of mortality risk.

However, at current pricing levels, the financial returns are not sufficiently attractive, particularly when you factor in the long duration of longevity business. Consequently, it has been the reinsurers, rather than the capital markets, who are the ultimate bearers of most longevity business.

Can longevity swaps continue working in this way?

This has been a ground-breaking year for the longevity swap market, not least because of the scale of the deals that have been written so far - in excess of £20bn to date - and the size of the individual deals.

Has 2014's heightened activity resulted in a capacity crunch for the rest of the year? Or does it indicate that the longevity market is ready to take on more and bigger deals? The answers to these questions depend on a number of different factors.

Prudent risk management: the survival mechanism of the reinsurance market

Reinsurers are prudent organisations that, while happy to do deals, generally prefer to avoid large concentrations of risk. We have seen this in recent transactions, where most deals in excess of £1bn are often broken up into smaller chunks to make it easier for insurers and reinsurers to write the business.

The BT Pension Scheme deal in July this year, where Prudential US took on £16bn in one go, bucked this trend. However, this appears to be an exception, and the way forward for the UK market looks to be through spreading risk rather than concentrating it.

A key influence on capacity is the hedge that longevity risk provides against existing mortality business. However, as reinsurers write more and more longevity business, the capacity to hedge this risk will be diluted, and so appetite to write new business will reduce.

So far, this has not yet emerged, and the longevity market is still buoyant, but, at some point in the future, reinsurers' capacity to write business and the value drawn from it will be affected.

Solvency II: a threat to capacity?

Those looking to transact should also be mindful of the imminency of Solvency II and the impact that that will have on the reinsurance market as a whole, not just for longevity business.

Solvency II is likely to increase the value to insurers of passing on risk to the reinsurance market as well as having an impact on reinsurers' reserving requirements. Insurers are likely to look to pass on longevity risk from historic annuity policies to reinsurers, which may well serve to suppress reinsurer appetite for pension scheme longevity risk.

Experienced teams are in demand

Longevity deals are complicated, high-profile deals, and while they may be high value, they also tend to be few and far between, with the market often being described as 'lumpy'.

As a result of this, many organisations have been reluctant to build large teams that would not be fully utilised all of the time. The upside to this is that it saves costs, but the downside is that there is a limit to the number of deals each team can take through to the execution phase in parallel. In the end, this resource constraint means that reinsurers have to pick which deals to pursue, and only sufficiently desirable deals will actually reach completion.

Has the market reached its tipping point?

In the short term, there is appetite within the current market for pension schemes to pass on their longevity risk. Indeed, the market as a whole has high aspirations to grow much larger as a greater understanding of longevity swaps is achieved across pension schemes, benefit consultancies and the insurance industry. However, the reality is that the market may reach tipping point soon at current pricing levels, and it is likely that while the market will still grow, it may be at a slower pace than some may hope for.

So what does this mean for pension scheme trustees? Appetite within the longevity market is likely to reach a plateau over the next few years, and so intermediaries and reinsurers will be able to be increasingly selective regarding the schemes with which they transact.

One thing to be mindful of is that while the pension scheme may not be looking to deal directly with a reinsurer, it is the reinsurers who ultimately determine the capacity within the market, along with the associated supply and demand impacts that are likely to follow. 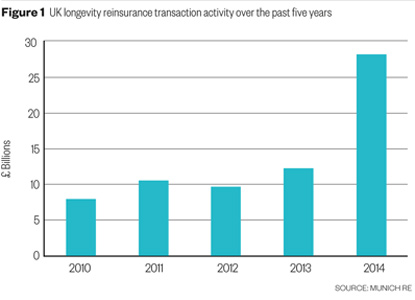 This article appeared in our October 2014 issue of The Actuary.
Click here to view this issue
Filed in
10
Topics
Professional