Money in the pipeline 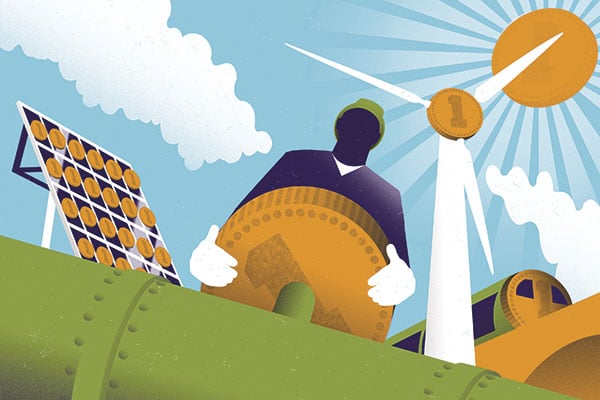 To date, utility companies have been the most important and largest developers of renewable energy assets, mostly by issuing investment grade corporate bonds which are then purchased by traditional corporate bond investors. However, a new investor-base is required to finance the need for geo-politically secure, environmentally affordable and competitive energy in the 21st century economy. The market has had to diversify by seeking new investors that are able to provide capital, like pension funds and insurers.

Securitisation is the pooling of assets, typically representing the payment obligations of a number of borrowers. Renewable energy assets, such as electricity generated from onshore and offshore wind farms, solar parks and other renewable energy technologies, form  potential assets for securitisation. With a weighted average life of 20-25 years, this asset class is stable, uncorrelated and its cashflows are inflation protected.

SolarCity, an American provider of energy services, announced in July 2014 the pricing of the third offering in its solar asset-backed programme. The LMC Series III, LLC is priced at $215.5m principal aggregate amount, secured by and payable solely from the cash flow generated by a pool of photovoltaic systems, an arrangement of components designed to supply usable electric power for a variety of purposes, using the sun or, less commonly, other light sources as the power source.

Elsewhere in Jädraås, Sweden, an interesting example of an onshore wind farm was commissioned in 2013. The 203 MW wind project had a total capital expenditure (CAPEX) of 360m and was innovative due to the guarantee placed by the Kingdom of Denmark on one third of the CAPEX. This allowed PensionDanmark to provide 120m in the form of 15-year synthetic loans. The loans are rated AAA thanks to the innovative guarantee by EKF. The export credit guarantee aligns the risk-profile of the loans to the Danish sovereign rating, now making pre-construction developments accessible to institutional investors without using specialised infrastructure funds.

The internal rate of return for the special purpose vehicle (SPV) is projected at 5.4%-7.9% for the project finance and 13.7%-17.7% on the equity, after tax. Furthermore, the project has benefited from hedging contracts to reduce the impact of price volatility and also shift a portion of price risk away from the developer towards risk brokers.

Clement Weber of Green Giraffe Energy Bankers, a specialist renewable energy advisory firm, says commercial banks have been steadily used as non-recourse finance providers in the past five years, accounting for one-third to a half of the offshore wind projects globally. They typically finance up to 70% of a given offshore wind project, the remaining part being financed by subordinated loans or equity.

The equity investments have been historically borne by the large European utilities, but some of them are dropping out and pure financial players, such as private equity firms, infrastructure funds and pension funds are coming on to the market to fill the gap. As an example, the £1.2m 288 MW Meerwind offshore wind farm was financed by a mix of equity and project finance loans.

Other projects are fully equity financed, such as Dong's 600m 252 MW offshore Gode Wind II development, announced in April 2014. Rune Birk Nielsen explained that Dong sought to frontload pre-construction CAPEX at 50%, with the remaining 50% equity investment coming from a consortium of Danish pension funds between 2014 and 2016. The consortium of pension funds has agreed to pay the majority of its investment upfront according to agreed milestones.

The source of financing depends on the risk perceived. At an early development stage of a project, a technology or an industry, the developers usually have to bear the risk and finance it. In a sufficiently mature industry - a stage that offshore wind reached in 2006,

15 years after the first prototypes installed off the coast of Denmark - banks and some financial investors are willing to finance late development and construction.

Is there liquidity in renewable energy assets?

Industry leaders at the large-scale end say that the secondary market for the sale of solar or wind assets is certainly liquid because buyers are more comfortable purchasing an operational asset with an established income track record. There is, however, a shortage of good quality assets that are fought over by investors, and this lack of ample supply leads to higher valuations.

Recently, the European Investment Bank (EIB) held a round-table discussion on the potential interest in an EIB-wrapped securitised infrastructure fund for renewable energy developments. The investor consensus was pretty much that there is already plenty of liquidity coming from banks in the form of project finance and equity investors, and such a fund therefore would not see great uptake. Banks are still active in the project finance market despite talk of exit in the name of improved capital ratios.

A few years ago in the UK, solar developers could expect five out of every 10 applications submitted to local authorities for site development to be granted planning permission. Now, the success rate of that has decreased, diminishing the returns for developers. The reason for this is that the UK government is lowering the subsidies (feed-in-tariffs) in April 2015, so developers are making hay while the sun shines.

Furthermore, as investors are witnessing returns of more than 8% in the post-construction phase, the lower-bracket risk-takers are entering the market. For solar investments, previously perceived as risky, required returns are greater than 8%, but the good track record on (electricity generated) cash flow has lowered perceived risks, and so expected returns are now at only 4-5%.

Independently of renewable energy developments, the European Central Bank (ECB) is focusing on reviving the European asset-backed securities (ABS) market, as it is highly exposed to the collateral which it has taken in its European Financial Stability Fund.

There is little activity in the European securitisation markets, with redemptions greater than issuances. The ECB sees ABS as a method of credit creation, transmitting monetary policy into the real economy, and is proposing three areas of change:

the European Commission is proposing to halve the capital charge for AAA-rated Type 1 ABS to 2.1% and increasing this charge down along the ratings bands (4.2% AA, 7.4% A, 8.5% BBB).

2. Transparency and standardisation requirements: transparency of loan-level data, central database depositories and standardised prospectuses for securities, all enabling comparison within the asset-classes.

3. Treatment of ABS by credit rating agencies: the ECB would like investors to be able to decide whether or not to apply the sovereign rating in their internal evaluations. ABS in stressed economies are constrained by the corresponding sovereign rating.

Asset-backed securities could also be structured on loans made available to retrofit commercial or residential buildings to high levels of energy efficiency. Smaller-bracket energy-efficiency projects are too small for institutional investors to participate in: the average retrofit for the average commercial building is in the range of $1-10m, so aggregating these projects into ABS could be useful.

The process of bringing ABS to market has improved, as originators, such as banks, need to purchase and retain at least 5% of the originated security on their books. The lower rated tranches are kept on the books, while the higher rated tranches are sold to investors, so in effect investors are offered a sound deal.

As securitisation is not an asset class in itself, but a useful financing method to pool future streams of income, the key to successful investment lies in understanding the macro-economic factors and analysing the underlying asset-class, which holds true for any market.

Securitisation is a simple and useful method for re-financing operational new energy assets, as we have seen in the ABS issuances by SolarCity. The photovoltaic solar panel market is considered a mature asset-class, with lower risks.

Comparing the competitive and innovative dynamics of the telecommunications industry with the energy industry, Michael Liebreich of Bloomberg New Energy Finance points out that the cost of producing electricity from solar has fallen at a faster rate than the rate of change in the telecoms industry of delivering mobile telephony - which challenges our perception of the change that is possible in the energy markets.

This article appeared in our September 2014 issue of The Actuary.
Click here to view this issue
Filed in
09
Topics
Professional