Having been one of the most influential regulators in the European Union, Sharon Bowles speaks to Mark Dowsey about her many achievements and how she believes actuaries can engage in policy debates in Europe 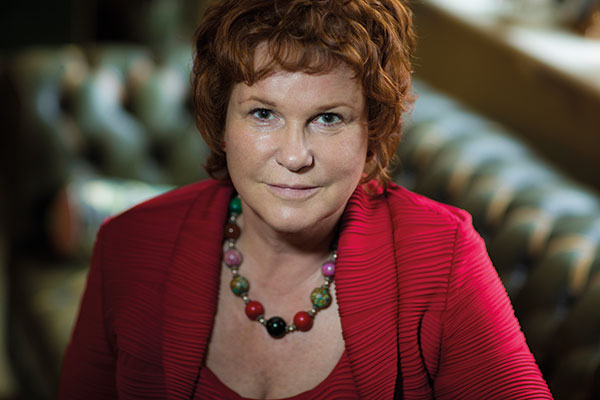 Sharon Bowles is a Liberal Democrat politician, a former member of the European Parliament (MEP) for the South East of England, and was the first British chair of the European Parliament's Economic and Monetary Affairs Committee. She has been described as the most influential Briton in the development of European Union policy, and as one of the top 10 most influential regulators in the EU. She was also shortlisted for the role of Governor of the Bank of England in 2012.

Bowles is now moving on to new challenges. Her husband, Andrew Horton, is about to retire and together they are disposing of their patent attorney business. Despite not standing for re-election in the European elections this year, she shows little sign of wanting to rest up.

She has maintained a busy schedule of speaking events, and has half an eye on a "US tour". This amounts to 'slowing down' compared with the frantic activity she has sustained over the past five years. No wonder then, when pressed on her desired super-power, Bowles opted for the ability to slow down time. The Actuary recently met up with her to discuss the many facets of a political life.

How did you get to the position of chair of the Economic and Monetary Affairs Committee (ECON) in the European Parliament?

It was totally accidental. I had been interested in politics from the time of Margaret Thatcher and the recession of the early 1980s. I was upset, however, at the divides in industry that it caused. I also felt there weren't enough people from science and technology involved in politics. So, rather than sit and complain, I decided to do something and became more engaged in political issues.

As a chartered patent attorney, and having a technical background in analysis and numbers, it seemed to come quite naturally to me. Coming from a profession where you have to satisfy the rigours of both law and engineering in what you're describing, being able to draft, express and write amendments was also something that came relatively easily. So, being a patent attorney is a very good background to going into politics.

Why did you then move from there to chairing the committee? Did you put yourself forward?

No, that's not how chairs work. The chairmanships are shared out between the parties on a proportional basis determined by their relative strengths, so it's no surprise that the larger groups like the socialists and the European People's Party get their first pick of the chairs. The Liberal Democrats were offered ECON and we sent it back twice saying, "no, we want civil liberties", but others wanted that. So there was quite a lot of argy-bargy. It was much more that the finger of fate was pointing at me.

During the past five years, what would you say was your greatest achievement?

We took 60 pieces of co-decision legislation through to completion, from start to finish. Financial services accounts for a little over 30 of those pieces of legislation, with some really big items in it, such as the Capital Requirements Directive (CRD) and the Markets in Financial Instruments Directive (MiFID), but we were also working on Solvency II and all the derivatives legislation in the European Market Infrastructure Regulation (EMIR). Plus we have the governance legislation through the so-called 'six-pack' and 'two-pack' fiscal surveillance part of the Treaty on Stability, Coordination and Governance, which are very intrusive into what member states can do with their budgets.

Presumably, it would be wrong to say that it was the quantity of legislation that you are proud of?

Well, there are individual things, but it's very difficult to single out a particular piece of legislation. CRD was very important and both MiFID and EMIR were extremely important. If you are looking in the context of the EU, then everyone is always going to say the creation of the banking union and the single supervisory mechanism are major achievements; it depends on your perspective. In the UK, the focus is financial services, if you are in the Eurozone it was initially the six-pack and so on, and then the banking union. It's a puzzle that all fits together and all pieces have to work, so what I'm proud of is that I've been down and dirty in the detail of every single piece of it.

Did the interesting discussions happen behind closed doors? Televised debates did not seem to discuss matters in depth.

Yes, that's right - especially during hearings, when there isn't actually any time allocated to make speeches. But the work is not unseen - all texts are available, with all of the amendments, the results, and even the trialogue tables and compromise amendments - all the European Parliament's work is public.

How do you avoid ending up with a no-win compromise?

It's easy to say that and that's what to expect, but I think we're rather more sophisticated than that. We are pretty good at finding compromises that are nevertheless strong. With MiFID, we implemented some strong rules on how high-frequency trading is done. If you look at capital requirements, the European Parliament was good at bringing in elements to foster growth - all the changes that I promoted on trade finance and so forth. The purpose of financial services legislation is that you should feel you have been made a little more constrained. Of course, industry jolly well ought to feel a little bit nipped, but not savaged, and I think getting that balance right actually fits quite well with the European ethos.

Should actuaries be looking to inform the debate? Are there ways in which we should be doing more to engage with policy makers?

You shouldn't be afraid of being technical. Not every MEP wants to or is capable of being highly technical, but there are some and you should share that knowledge. There is often a problem when the technical work goes to lawyers and the public affairs people, and by the time it re-emerges you are presenting a 'this is a truth, this is how it must be' and you've lost all the reasoning. If something is not understood then it won't succeed. If you have a genuinely good case then it is usually listened to, especially when it affects real people and the real economy. That's where the European Parliament resides - asking 'What is the end effect on our constituents?'.

ECON supported the request from the European Insurance and Occupational Pensions Authority and other European supervisory authorities (ESAs) to extend their powers to include direct intervention in institutions in a particular member state. Does that render national competent authorities (NCAs) superfluous?

I don't think you'll ever render NCAs superfluous, or not for a long time. Maybe, ultimately, they will be absorbed into a network like the single supervisory mechanism, with banking supervision under the European Central Bank. However, the ESAs are quite small and the rulebook is still not a handbook in terms of the progression of detail.

You've publicly stated that a lesson to be learned from Solvency II for the revision of the Institutions for Occupational Retirement Provisions Directive (IORPs) was that more information should be included in the Level 1 text and not left for Level 2. Can you explain that a little more?

It was a problem everywhere. Our first discovery that it was a problem was on MiFID 1. Level 2 came along and it wasn't what we'd expected and was sent back. All the time we were working on Solvency II, we kept referring back to that experience, saying it's very difficult for us to fix the Level 1 text until we see where we think you're going to be going on Level 2. When it is completely new legislation, it is quite difficult to frame those policy objectives and choices until you've actually seen what they come up against in the technical work, and it would be ideal if we had some other method of interchange that is not a complete revision of Level 1 text but allows flexibility.

What consideration has ECON given to the possibility that measuring the balance sheets of different financial institutions in relation to the same limited pool of financial instruments could create systemic risk?

At the moment, everything is being run by central banks. The various stability boards are dominated by central bankers. They are as capable as others of group-think and they're all moving in the same direction. They are very bank-focused instead of market-focused. They understand markets, but they don't actually understand capital markets outside. Perhaps our next systemic crisis is central banks.

That's all history. Going forward, what's your next move?

I'll go over to the 'dark side' and do something in the industry. Realistically, it seems that non-executive roles will be the obvious route to go down.

How much forward-looking does ECON do regarding risks like climate change and food and water security?

I don't think its job is to try to second guess actuaries and others. There are things that do crop up. If we were looking at what we put in MiFID, then having position limits on commodities was all to do with food security in the sense of not having inflated prices. ECON also considers sustainability, both in an economic and climate change sense, so it makes amendments that have a specific objective.

Maybe now there should be some more geopolitical considerations. Everything is now done through globalised banking, and geopolitical awareness has gone by the board.

I told my seven-year-old son that I was coming to see one of the most powerful people in Europe, so he wanted to know what super-powers you have. So, if you could have a super-power, what would it be?

During the past five years, the super-power that I would have liked would probably be a little bit of time to travel or a way of cloning myself. I think most other super-powers would lead to problems, wouldn't they?

This article appeared in our August 2014 issue of The Actuary.
Click here to view this issue
Filed in
08
Also filed in
Interviews
Topics
Professional