The European Commission wants to revise the IORP Directive to further facilitate the cross-border activity for Institutions for Occupational Retirement Provision (IORP) and to modernise their supervision. To increase the comparability between the different types of IORPs the European Insurance and Occupational Pensions Authority (EIOPA) introduced a new risk-based framework. The base for this framework is a market consistent valuation of all instruments in the holistic balance sheet (HBS). The difference between an HBS and a normal balance sheet is that next to the items of the normal balance sheet like assets and liabilities, the HBS also includes values of the steering mechanisms, such as sponsor support, benefit reductions and conditional indexation. In 2012, in a Quantitative Impact Study EIOPA tested the impact of the HBS on the valuation of the occupational pension provisions and the solvency capital requirements (SCR). On July 4, 2013, EIOPA published its report on the results of this QIS .  One of the issues described in this report is the impact of modelling assumptions on the valuation of the HBS. In this article we will illustrate this issue.

Risk-neutral valuation is based on the concept of absence of arbitrage. This concept is envisaged in figure 1. We introduce a red risky asset and a blue risk-free deposit. The assets can evolve in two different states, good and bad. The prices in the initial and end states are given for both assets in figure 1. From the prices of the blue asset one can derive the risk-free asset return equal to 5%. 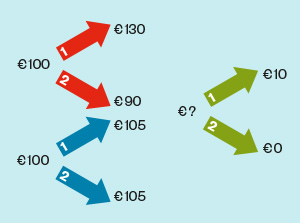 Using a Monte Carlo simulation we can create risk-neutral scenarios. Using the method illustrated in Figure 1 it is possible to value the steering mechanisms within the IORP's pension deal.

The emphasis in this article lies on the Monte Carlo simulations of a term structure of interest rates. We can model the short rate using two various short rate models (see Box 1). For other asset classes we used Black-Scholes models. These classes include price inflation, wage growth and stocks, calibrated to market data as well.

Box 1: Modelling assumptions for the term structure of interest rates

In order to measure the impact of the choice between a one or two-factor Hull-White model, we simulated 2 500 risk-neutral scenarios under both models discussed in Box 1. Using these sets we valued the HBS and the SCR for a fictitious pension fund .

In the QIS, EIOPA requested the IORPs to calculate the SCR based on a standard formula with the following risk modules: operational risk, market risk, health risk, counterparty default risk (including default risk of the sponsor), pension liability risk and intangible assets risks.

The surplus in each set of charts represents the excess of assets over liabilities in the unshocked HBS, including the value of embedded options.  The market consistent value of sponsor support is included in the assets, while conditional indexation increases the liabilities and benefit reductions are represented as a negative liability.  The shaded part of the chart represents the shortfall in the HBS after it has been shocked, net of the starting surplus.

Based on the example we conclude that when pension funds have the ability to choose their own modelling assumptions, regulatory arbitrage is possible. Further research on this subject should provide more guidance with respect to the modelling assumptions. This is an important condition in order to create a consistent risk-based framework that can be used for regulatory purposes. Although EIOPA needs to give more guidance regarding the modelling assumptions of the HBS, members of the Actuarial Profession can play an important role in the development of a consistent risk-based framework as well.