Eugene Dimitriou looks at the investment opportunities for insurers

With fixed income yields continuing their decline, insurance companies are increasingly under pressure to identify alternative sources of higher yielding assets. For many, the need to increase portfolio yield is a key strategic priority, especially for those that have provided policyholders with minimum return guarantees. At the same time, the advent of Solvency II is likely to exacerbate yield pressure as capital charges on lower-rated credit are perceived to be disproportionate to risk levels, with particularly high capital charges for asset-backed securities. 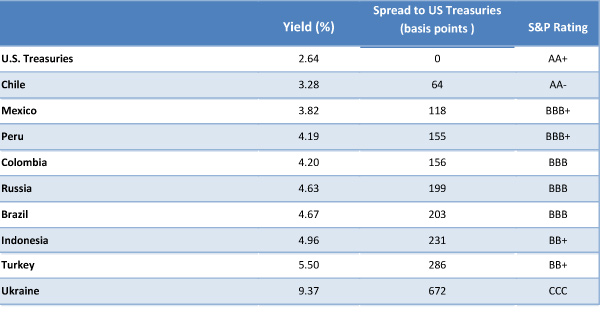 Both emerging market sovereign and corporate spreads are not only higher than similarly rated developed market investments, but also at wider spread levels than they have been in the past four years (see Figure 2). This may represent a compelling buying opportunity for insurers from the perspective of risk versus return and timing.

Are recent emerging market headlines a distraction for investors?

Much of the negative performance in emerging market debt in the second half of 2013 was driven by retail outflows from the asset class following the US Federal Reserve's (Fed) tapering announcements in May 2013. However, strategic investors, predominately institutional investors such as sovereign wealth funds, insurance companies and pension funds, have remained loyal to the asset class.

More recent news coverage has been dominated largely by more idiosyncratic issues relating to sub-investment-grade names such as Argentina, Ukraine and Venezuela. Across most of the large constituents of the emerging markets investment universe, we see relatively low levels of external debt supported by strong balance sheets with sizeable foreign exchange reserves that can be used as buffers in times of turbulence. Even though emerging markets have slowed down from their commodity-fueled boom of the recent past, we still see higher growth rates than in the developed world, thus presenting an attractive investment opportunity for insurers.

Comparisons are sometimes made with European peripherals, such as Spain or Italy, which currently have similar yield profiles and are quickly re-entering European insurer portfolios. However, most emerging market debt will not be exposed to such economies, with substantial national debts, structural unemployment and demographic issues, and substantial dependence upon the European Central Bank and the euro.

A case for diversification

At first glance, one could argue that emerging market debt is treated a little unfairly under Solvency II. There is no direct quantification of the obvious diversification benefits under the Standard Capital Model and the asset class will not attract the very benign capital charges which European Economic Area government issuers enjoy.

However, there is an important theoretical diversification argument to be made for insurers in search of additional yield. A more quantitative perspective is provided by a risk factor modelling analysis, in which  forward-looking return expectations are blended with historical volatility and correlation behaviour of various asset classes. Such analysis allows us one to compare risk versus return in an efficient frontier context. To illustrate this point, we consider two simple portfolio scenarios (see Figure 3). The first curve describes the efficient frontier of returns for a basic portfolio of European government covered and investment grade corporate bonds. The second curve describes the same efficient frontier, but with an allocation to emerging market debt (represented by a mixture of hard and local currency bonds) of up to 10%. For virtually any level of risk appetite, 30 to 40 basis points of additional annual return can be added.

Although emerging market debt is generally available in local and external varieties, most insurers are more likely to focus on the external hard-currency-denominated part of the investment universe, thus limiting exposure to emerging market currencies, a significant contributor to overall volatility. Most insurers with liabilities denominated in euro or sterling will find Solvency II's standard capital model capital charge of 25% for unhedged currency exposure unappealing. Therefore, currency hedging will likely be popular for either variety.

Key criteria for emerging market debt investment will typically focus on countries with sustainable levels of debt, strong balance sheets that may provide support during times of heightened market turbulence and with little external vulnerability. This investable universe also includes emerging market corporates, which further expand the emerging markets opportunity set. There are often attractive opportunities in quasi-sovereign names that have a significant strategic importance to the respective sovereign and enjoy an implicit and/or explicit support of that sovereign. They also typically trade at higher spreads than sovereign bonds. For insurers, it may allow them to lock in substantial credit spread duration for reasonably long periods and there is a tantalising (albeit not 100% clear as yet) prospect of matching adjustment treatment for a fully currency-hedged portfolio.

As liquidity becomes more constrained, we believe that differentiation on the basis of fundamentals will be a driving force behind returns in emerging market debt. Insurance companies may find that such developments represent a compelling investment opportunity to actively exploit their natural advantages in investing: a long-term horizon with limited liquidity needs. It also represents an opportunity for an active manager to add value to an insurance investment portfolio by carefully selecting credits that are likely to outperform.

Is the time right?

While emerging markets will continue to experience periodic turbulence, there is meaningful value in this asset class. Positive carry (such as a high current yield) is likely to protect against losses in the sector due to rising US interest rates in all but the most pessimistic scenarios.  At the same time, insurers' thirst for higher yield appears unlikely to abate.