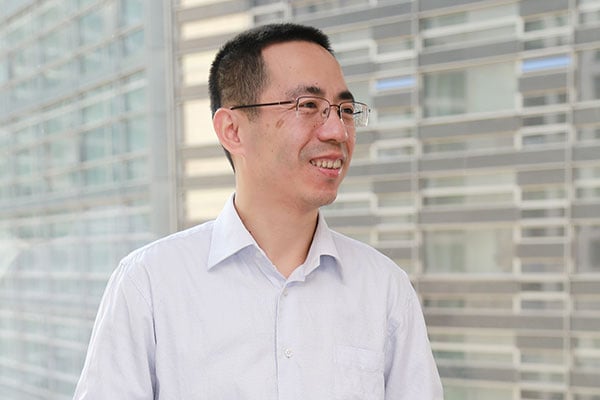 Dr Yulong Zhao is the deputy director of the Finance and Solvency Regulation Department of the China Insurance Regulatory Commission (CIRC). He started his working life as a bridge designer. Twenty years on he continues to design, but now it is regulation rather than bridges. It's been almost two years since China launched its insurance regulation reformation and he is one of the leading architects of the second generation of the Chinese insurance industry's regulatory regime. Here, he discusses how China's Risk Oriented Solvency System (C-ROSS) will benefit the insurance market as a whole and why it would bring regulation in the country to the next level.

Why did you choose to work in insurance regulation?

I grew up in a traditional Chinese family and my Mum always taught me that I should work to serve the public interest. I was also heavily influenced by the educational thoughts of Confucius - 'he who excels in study can follow an official career'. In the meantime, I was looking for a role with a strong technical element. Working for the insurance regulator offered me all of these things.

What is the background to the reformation of Chinese insurance regulation?

China's insurance market has enjoyed a decade of high growth. In 2012, annual premiums increased to £155 billion and China became the fourth largest insurance market in the world. With fast growth in premiums, the Chinese market is becoming more open and is gradually maturing. The current insurance regulation regime is strict and overly regulated. It controls product terms and conditions, premium rates and investment channels. In light of the overall plan for market-orientated reformation for the financial industry in China, this is no longer suitable.

The CIRC recognises the shortcomings of the current regime, for example, it is volume rather than risk-based. It does not differentiate companies from a risk management perspective and does not have a mechanism to encourage a better risk management system in firms.

Globally, we see the move to risk-orientated regulation. Basel III in the banking sector, the International Association of Insurance Supervisor's new Insurance Core Principles, the EU's Solvency II, and the Solvency Modernization Initiative in the US.

Against this background, the CIRC is keen to develop a new regulatory regime to meet local market needs and offer useful experience to other emerging markets.

Tell us more about the infrastructure and the timeframe of C-ROSS?

The CIRC launched the C-ROSS project in April 2012 and planned the new regime to be in force within three to five years. Based on current progress, we hope it will be in place by 2015 at the earliest. We have finished the design of the top-level framework, which complies with IAIS requirements and is also used in both Solvency II and the Basel system. However, the contents of the three pillars have many elements of localisation, reflecting China's character as an emerging market and a large economy.

C-ROSS has three institutional characteristics throughout the framework to accommodate China's situation - supervision, emerging markets and risk-orientation with value consideration. Under Pillar II, CIRC introduced two supervisory conducts - an Integrated Risk Rating (IRR) and Solvency Aligned Risk Management Requirements and Assessment (SARMRA). IRR will be used to evaluate an insurer's overall solvency based on both a quantitative and qualitative basis. SARMRA ensures that the companies' own risk management plays an important role under the C-ROSS regime.

What are the implications of the new regulation to other stakeholders like consumers, industry and society?

We have designed the new regulation in the hope of benefiting all stakeholders. At the very least it will be a 'Pareto improvement'. The new system can recognise 'good' and 'bad' companies and regulate them differently. Introducing a 'survival of the fittest' element will help customers and the regulator to select companies and motivate them to improve their risk management framework.

After the launch of C-ROSS, we also hope that capital efficiency in insurance companies can be increased. Therefore insurance companies in China can be more competitive with better risk and capital management. Under Pillar III, a more transparent public disclosure is required, which will protect policyholders, investors and the industry. Through C-ROSS we hope to make the Chinese insurance sector better managed and more sophisticated.

Where do you believe the new regulation stands internationally?

Before launching the C-ROSS project we studied the solvency regulation framework of developed markets in Europe and North America. We soon realised that these systems are suitable for mature markets, but China, as one of the largest emerging markets, has its own characteristics and we should therefore develop a system that suits our market.

In July 2013 the CIRC hosted an international conference on 'reformation and collaboration of solvency regulation'. The aim was to initiate discussion and collaboration between emerging markets. Top insurance regulation officials from Golden BRIC and the IAIS were in attendance, with the C-ROSS project highly regarded by the delegates. We also maintain close communications with insurance regulation officials in developed countries. In February 2012 the chairman of European Insurance and Occupational Pensions Authority (EIOPA), Gabriel Bernardino, officially invited us to participate in the equivalent assessment. Since then we have submitted five rounds of questionnaires to EIOPA and we invited EIOPA experts to China for an on-site inspection. EIOPA appraised the C-ROSS project and submitted their assessment report to the EU Committee in December 2013.

Overall, we hope C-ROSS is a bridge that will better connect China with the global insurance markets and that it could potentially be a valuable example of solvency regulation to other emerging markets.

If you were not working for a regulator what would you be doing?

I would most likely be a university lecturer. Teaching is another good way to serve the public interest. I am a visiting professor at four universities and an anonymous referee for two top academic journals in China. A Confucian sage, Mencius, once said there are three things a gentleman delights in, and he who has the good fortune of having the most talented students has the third delight in life. I fully agree and enjoy working with my students.

What do you like to do when you are not working?

I enjoy reading, and my reading list is wide-ranging covering the Analects of Confucius, the Taoist 'I Ching: Book of Changes' and Buddhism. I find different cultures interesting. I am not a Christian or Catholic, but I sometimes go to church, and have made many friends there. I like to learn about different cultures and nations and believe this helps me understand the world.

I have a 10-year-old son and we do lots of father-son activities. We go swimming, hiking and making handcrafts. I teach him Taiji, a traditional Chinese shadow boxing. I also teach him other aspects of Chinese culture and hope he will inherit our traditions.

This article appeared in our April 2014 issue of The Actuary.
Click here to view this issue
Filed in
04
Topics
Risk & ERM