Rejoice, the battle is won!

The battle is indeed won! Subject to an imminent confirmation vote in the European Parliament, annuity writers will be able to apply a matching adjustment to the discount rate used for calculating liabilities under Solvency II when it comes into force on 1 January 16.

The matching adjustment will allow insurers to use a discount rate similar to that currently used under Solvency I regulations for annuity business, reflecting a 'liquidity premium' that it is argued is present in the yield of the long-term credit assets insurers hold to back annuities.

If the matching adjustment hadn't been granted, technical provisions would have shot up on existing business, threatening insolvency for large swathes of the UK insurance market. Annuity rates would have fallen even further from their current historic low levels, impacting many future generations of pensioners.

It is no surprise, therefore, that there was so much political and industry lobbying to get the matching adjustment included and the attaching conditions eased. Various forms of the matching adjustment have been considered throughout the consultation process, including consideration of the types of business that it should apply to.

The conditions for use set out in the Omnibus II text agreed by the Trialogue parties are summarised in Table 1.

Previous versions of the matching adjustment limited the amount of assets held that were BBB rated and did not allow for lower rated bonds to be held. Under such conditions, bonds that fell below BBB rating would have had to be sold within two months. Now, though, under a strict interpretation of the rules, such assets may largely need to be held until maturity to meet the matching adjustment conditions, even if the default and spread risk of doing so has increased. One thing seems clear though - the ability to trade the annuity-backing assets is heavily restricted. This may have significant consequences.

Investing for the long term

Typically, corporate bond portfolios backing annuity business are held on a 'buy-and-maintain' basis. This aims to improve the 'buy-and-hold' approach, whereby bonds are held to maturity to capture the excess spread perceived to exist to compensate for the liquidity and associated transaction costs that other investors typically require. By contrast, the 'buy-and-maintain' approach incorporates regular credit screening to remove and replace bonds that are likely to default or fall below certain rating levels. Such mandates are fiercely competitive, and a fund manager's track record in avoiding these 'fallen angels' is a key differentiator.

If an insurance company is now unable to take advantage of credit screening, and has to hold the bonds to maturity regardless of their view on the issuer, this may have significant knock-on effects. 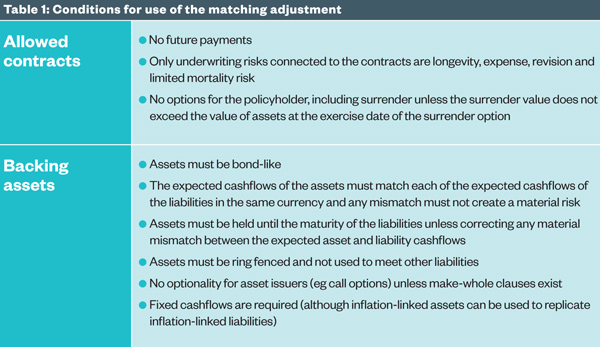 Unlike with equities, where index investment is common, virtually all corporate bond management is done on an active basis, so it is clearly believed in the market that a passive approach is sub-optimal. By implication, a move to a buy-and-hold basis may lead to lower profits or lower annuity levels if lower investment returns result from this change in strategy. Clearly, we would also expect investment fees on such mandates to reduce, which will impact the business models for asset managers.

We may even see a change in the assets being held. While the assets held on a 'buy-and-maintain' basis do benefit from a liquidity premium, this is more reflective of the cost of selling such bonds rather than suggesting that these bonds cannot be sold at any price. Clearly, the manager needs to be able to sell any bonds it feels it needs to, and so there has to be a minimum level of liquidity in holdings. If managers are not able to sell the assets, they might feel truly illiquid assets, such as private placements or loans, are more attractive.

Not as good as it looks

In addition to the investment considerations above, insurance companies currently maintain risk limits in respect of the credit quality of the bonds held, in line with their risk appetites. These are normally defined in respect of maximum levels of holdings in various rating levels, and usually permit only a small holding, say less than 5%, in sub-investment grade (lower than BBB-) assets. This also restricts the maximum level of spread capital that has to be held, as this is dependent on the ratings of the assets held.  This can be seen in Chart 1, which shows the proportion of bonds held at 31 December 2012 by rating category, by three of the biggest writers of annuity business in their stand-alone annuity companies, along with the pre-diversification credit spread shocks assumed for a bond with a duration of 10 years in the standard formulae calculations for the Long Term Guarantee Assessment.

One of the possible scenarios under the proposed regime is that the quality of a 'buy-and-hold' portfolio could fall below the risk limits allowed. In this situation, the company would be faced with the unpalatable choice of exceeding its risk limits and holding greater levels of capital than anticipated, or, as the rules appear to suggest, coming out of the matching adjustment process for at least two years, with the corresponding increase in technical provisions.

Neither of these circumstances would have been priced into the annuity business when it was written, and is therefore likely to cause losses. Companies that have priced assuming a downgrade cost (the cost of maintaining a constant rating mix by selling downgraded assets and replacing them with higher rating bonds) may be able to use this now defunct margin to partially offset these losses, or subsidise the yield on new business to allow higher quality assets to be purchased.  Perversely, the company may prefer distressed assets to default, so they can take the loss and replace the cashflows with the bonds of a higher rated company to reduce capital and risk levels.

For new business, these scenarios will need to be considered when pricing, and are likely to lead to less beneficial rates for pensioners, and an increased likelihood of retirement burden falling onto government.

On the face of it, the battle may have been won, and certainly, it would have been bloodier if no matching adjustment had been proposed. However, on closer inspection, it appears that even the victors may have been wounded, and the impacts on those who rely on annuity providers, namely active bond managers, the working population and the government, may be more complex than anticipated.

This article appeared in our March 2014 issue of The Actuary.
Click here to view this issue
Filed in:
03
Topics:
Risk & ERM