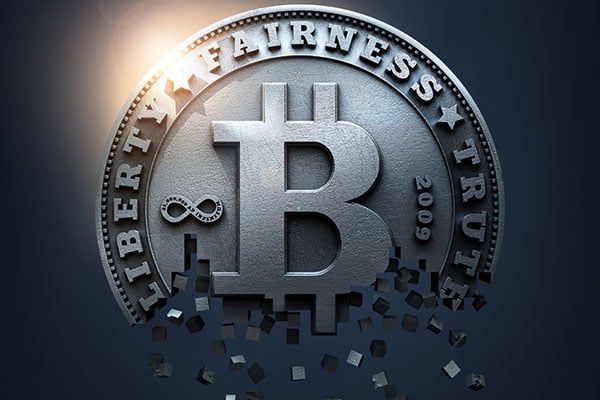 Be your own bank. This is the promise touted by advocates of Bitcoin, a new form of money that underwent a surge in value and popularity in 2013. The technology allows individuals to transfer money online and in person, without the involvement of third parties such as banks, credit card companies or payment processors.

The claimed benefits include increased privacy and faster, cheaper transactions for businesses and consumers. With Bitcoin it is possible to transfer millions of pounds across the world instantly for close to zero cost.

Critics maintain that the currency's volatility makes it unfeasible as a store of value and that it is too complicated for the average person to understand and use.

The cryptocurrency was launched in January 2009 by its pseudonymous creator Satoshi Nakamoto. There has been much speculation over the inventor's true identity, with theories ranging from a lone Japanese computer scientist to a team of ideologically-motivated hackers. Crucially however, the identity of Nakamoto is irrelevant to the security and stability of the platform - the software code is entirely open-source, which has enabled thousands of sceptics worldwide to analyse the programme and verify that it cannot be manipulated by any single party.

Even Bitcoin's many detractors concede that it is an impressive technological achievement. Indeed, the common consensus is that the greatest obstacles to Bitcoin's success are not technical, but political and economic in nature. The technology was designed to be decentralised, to ensure there is no single point of failure. This means that there is no corporate entity upon which governments can impose money-laundering regulations and 'know your customer' guidelines, as they do with existing payment processors. This anonymity has sparked some concerns and led to the belief that heavy regulations will be imposed where users seek to convert Bitcoin to national currencies and vice-versa, negating many of the system's benefits.

Additionally, proponents of Keynesian economics - the school of thought favoured by central banks - maintain that the limited rate at which Bitcoins are created makes it ill-suited to adoption as a mainstream currency. They argue that as economies grow, so too should the money supply to ensure a sufficient volume of currency to facilitate the growth in the value of transactions. Without an increasing money supply, the value of the currency would increase relative to goods and services, disincentivising spending (why buy a car for £10,000 today when I could buy the same car for £9,000 in six months' time?), which would curtail economic growth.

The counterargument is that this 'hoarding' theory is ill-founded - consumers will buy a car today as the benefits of immediately acquiring the vehicle outweigh any potential saving from delaying the purchase. There are numerous real-world examples of this being the case, for example, the falling prices of laptop computers and mobile phones over the past two decades has not hampered their sales.

It is worth noting however, that Bitcoin does not have to replace the pound or the dollar as the primary currency of a leading economy in order to massively impact international finance. Its utility as a payment system could see it supplant PayPal as the medium of choice for online person-to-person transactions. It also has the potential to transform the international remittances market, estimated by the World Bank to be worth $514 billion in 2012, by massively undercutting existing providers. This could have positive implications for developing countries, many of which rely heavily on remittances to support their economies. Bitcoin could also be used as a store of value in countries such as Argentina, where annual inflation now exceeds 20%.

Bitcoin has the potential to deliver wider benefits. Advocates claim that a decentralised currency is simply the first application of the technology, and that the independently-verifiable open-ledger system that Bitcoin provides could revolutionise more than just our monetary system. Decentralised stock exchanges, derivatives, book-keepers, and even provably-fair elections are all possible applications of the technology. This could bring significant benefits to those who use these services, as the settlement and auditing are carried out automatically by the Bitcoin network, reducing frictional costs.

It is easy to see that a revolutionary change in the finance system would massively impact the insurance and pensions industries, and thus the work carried out by actuaries. However, in the short term at least, Bitcoin's impact is likely to be much less dramatic. It is more likely to be for small internet purchases, rather than denominating insurance and investment contracts. In the longer term, its finite supply means the currency could eventually be seen as an alternative to gold as a safe-haven investment. Bitcoin shares many properties with precious metals - it is finite, scarce, and impossible to counterfeit. It does however lack gold's track record of thousands of years as a store of value, and thus is viewed with suspicion by many potential investors.

Despite this, Bitcoin was one of the best-performing assets of 2013. During what was one of the best years in history for equity market growth, Bitcoin returns far exceeded even the strongest-performing stocks, with the value of a single Bitcoin increasing by 6,000% over the year (see Chart 1). In addition, a UK-based company called Elliptic recently announced that Bitcoin balances deposited with them would be fully insured by an established London underwriter, which should allay some of the concerns around theft and loss which have deterred many potential investors.

One of the greatest barriers to entry for consumers has been the difficulty associated with acquiring and spending Bitcoins. Mining is beyond the technical capabilities of the average consumer, so the most popular way to acquire the currency is to purchase existing Bitcoins from other users. This can be done on a number of websites, but the process is cumbersome and slow compared to the online virtual currency exchanges. However, due to the regulatory uncertainty surrounding the fledgling currency, banks are reluctant to do business with any companies involved in the Bitcoin exchange markets, which has stunted the growth of these services. This could change significantly over the coming months - the New York Department of Financial Services met with Bitcoin entrepreneurs in January this year to discuss plans to implement a regulatory framework for virtual currency firms by 2015. Notably, the panel was convened by Wells Fargo, the world's largest bank by market capitalisation.

With growing adoption by merchants, and recent steps by regulators to co-operate with Bitcoin start-ups to provide a legal framework for the currency, 2014 is widely considered to be a make-or-break year for Bitcoin. For a technology which reached its fifth birthday in January this year, Bitcoin has come a long way.

The Prudential Regulation Authority is unlikely to advocate holding Bitcoins to back insurance liabilities yet, but if the technology continues to progress at its current rate, the finance industry would do well to keep a watchful eye on developments to ensure it is not caught off-guard.

This article appeared in our March 2014 issue of The Actuary.
Click here to view this issue
Filed in:
03