Time off for certain behaviour 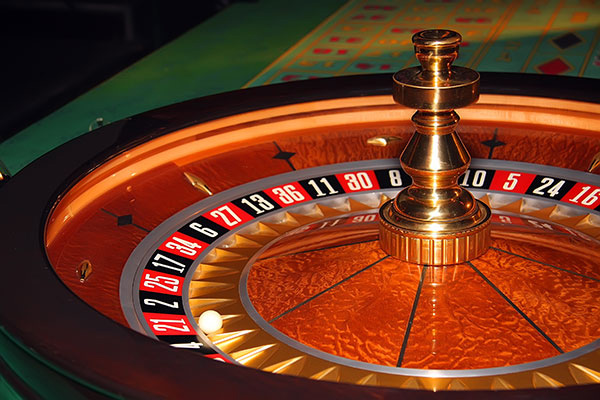 Behavioural economics is a fascinating field and one which actuaries should be aware of in their everyday work. It is the study of inherent biases in human decision-making. Many examples of these biases have been cited in connection with the financial crisis, and increasingly the implications for insurance are being examined. In a speech entitled 'The Human Face of Regulation' in April 2013, Martin Wheatley, chief executive of the Financial Conduct Authority (FCA), explained how the FCA is going to use the principles of behavioural economics in the protection of the consumer (see www.fca.org.uk/news/speeches/human-face-of-regulation).

The Courts Act of 2003 fundamentally changed the way that catastrophic injury claims are settled by insurers. It gave the courts the power to enforce a periodic payment order (PPO) as compensation instead of an upfront lump sum payment.

A PPO is an annuity payment from the insurer to the claimant, and is designed to cover ongoing care costs, loss of earnings and other expenses associated with the injuries sustained for the rest of the claimant's lifetime.

There could be a link between PPOs and behavioural economics. The final claim amount awarded in either a lump sum or PPO case is based on a series of 'choices'. These are made by the claimant and/or their representative and the insurer (or, in court cases, a judge). Courts have the right to impose a PPO, but there is still an element of choice as to the amount that is eventually agreed between the interested parties.

A 'choice' between a lump sum and a PPO for the claimant is effectively a choice between two gambles. The lump sum gamble is that the amount of money received now may be insufficient to meet future care needs. The PPO should provide more certainty around the ability to meet future needs. However, there are still inflation risks associated with PPOs, and also the consideration that if the claimant dies sooner than expected, the claimant's estate would have been better off with a lump sum settlement. Could there also be a well-established bias at play here, that of delayed reward discounting (DRD)?

DRD refers to the fact that, in general, humans prefer money now rather than later, and will accept a discount in an immediate amount rather than wait for a larger amount later in time. A quick internet search for DRD will elicit many scholarly examples of experiments demonstrating this effect in both humans and animals. Human experiments focus on small amounts of money (a few dollars), small time delays (days) and do not feature annuity-type choices. Therefore, they are not directly applicable to a choice between a lump sum and a PPO, which involve larger sums and lifetime durations.

One method for pricing excess of loss reinsurance in the presence of PPOs is to convert any PPO claims to an equivalent net present value (NPV) lump sum using the prevailing Ogden discount rate. These converted claims are then used in a traditional lump sum frequency and severity analysis before loading the resultant pricing for the presence of PPOs.

Our experience in doing this has led to an 'actuarial hunch' that PPO claims converted to their Ogden equivalents are not from the same underlying statistical distribution as traditional lump sum values. Fitting severity distributions to these claims in amongst the traditional lump sums can feel a bit like fitting to 'apples and oranges'. On comparing claimants with similar injuries, claims settled more recently as a PPO, revalued to an Ogden basis, just seem to be more expensive than claims that were settled a few years ago prior to the arrival of PPO settlements. This difference persists even after adjusting for inflation and after adjusting for the fact that it is often the larger claims that settle as a PPO. If our observation turns out to be true, excess of loss reinsurance pricing could have an implicit double loading. First, in the inclusion of these claims in the original lump sum severity curve fitting process (including the derivation of the development pattern applied to lump sums) and second, in the PPO loading applied afterwards. Similarly this sort of distortion could affect the parameterisation of capital models for classes of business that have experienced PPO claims.

This severity effect could of course just be 'inflation' at work and/or a suggestion that the actual level of inflation for these claims is not as we expected in our revaluation exercise. However, inflation is the symptom, not the underlying cause of the effect. There could be many reasons for this effect. Claimants' solicitors could just be getting better at including likely future needs in their annual PPO award requests - an example would be the need for a new car every few years. But shouldn't we explore the fact that DRD could be partly responsible?

The preference for receiving money upfront could mean that the choice between a lump sum and PPO with equivalent NPV would be biased towards the lump sum value. This effect was certainly evident in the early years of PPOs, with most claimants preferring to take the cash. If our premise is that if people inherently prefer the money upfront, what happens when it becomes more normal and socially responsible to settle on a PPO basis? There could be upward pressure on the annual payment amount under a PPO. This would force an inequality in the NPV of the two settlement methods in actual terms, to achieve equality in utility or emotional terms.

To test our theory to see whether DRD is having an impact on PPO settlements, we launched a survey with CASS and LSE students. The survey consists of questions designed to extract the pure psychological uplift factor between lump sums and PPOs by putting students in hypothetical claimant situations.

Participants are presented with the option of a lump sum and have to provide the minimum annual payment they would swap for the given lump sum. Importantly, students were instructed to ignore inflation, interest and tax and assume that life expectancy is fixed to remove any opinions in terms of future financial conditions. The four questions differ in terms of the size of the original lump sum (small and large) and the future life expectancy (short and long). Figure 1 shows the average response from the survey across the four questions in terms of the sum of the minimum annual payments (until the stated life expectancy) participants would swap for the lump sum offered expressed as a ratio of that lump sum.

As can be seen from the chart, it appears that individuals do require a premium to defer receipt from a lump sum to an annuity. This effect is more pronounced when the period over which they would receive the annuity is longer - for example, when life expectancy is higher. Another interesting observation is that the multiple is larger when a smaller lump sum is offered.

PPO settlements exhibit a clear increase prior to settlement, compared with a small decrease in general for lump sums. Interestingly, the uplift evidenced in the data corresponds quite closely to the survey results.

Behavioural economics experiments are notoriously difficult to conduct without introducing inherent biases, but the fact that DRD is a well-accepted phenomenon and that our survey and the data supports the hypothesis should lead us to reconsider at least two aspects of our analysis in respect of PPOs: how we price reinsurance in the context of PPOs to avoid double-loading the cost, and how we parameterise our capital models when the vast majority of our past data consists of lump sums. Reserving is another area that could warrant attention, both in terms of incurred but not reported (IBNR) and in terms of the setting of original case estimates. Lastly, I think the more we look for the effects of behavioural economics in our everyday work, the more we will find them. 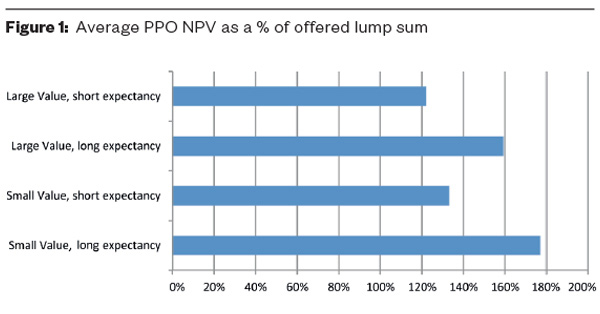 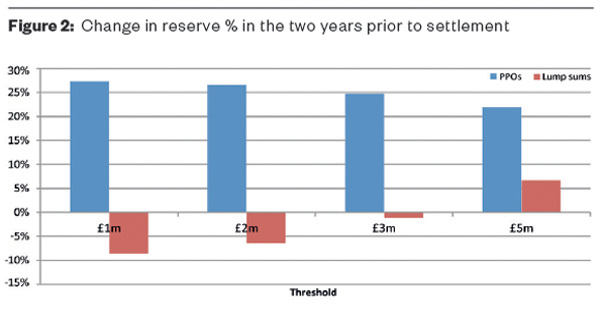 This article appeared in our February 2014 issue of The Actuary.
Click here to view this issue
Filed in:
02
Topics:
Risk & ERM