Extreme risks, of the type that can wipe out an insurance business, are notoriously hard to identify and mitigate. But that doesn't make keeping assessments up-to-date any less important, says Graham Fulcher

Did you know that the average person has a 1-in-700,000 chance of being struck by lightning in a single year, but that those odds drop to 1-in-6,000 over a lifetime?

Fatalistic interest aside perhaps, 'what has this got to do with insurers?', you may ask yourself, other than the possibility that your company might be providing some kind of cover to any unfortunate souls that happen to be on the receiving end of a lightning strike.

In fact, it reveals an aspect of risk management that is often overlooked in the areas of finance and economics when thinking about risk and expected return - but one that has a profound impact on how extreme risk events affect a business.

That is, that beneficiaries of any long-term security scheme, such as life insurance, annuities and casualty insurance, face risk serially, compounded over the duration of their participation in the scheme. To keep the promises inherent in these long-term schemes, those that manage them need to be concerned with extreme risks that could threaten the survival over the long term. As Lloyd Blankfein, chairman and chief executive officer of Goldman Sachs, once put it in a CNBC interview: "The definition of infinity is that if you wait long enough, everything happens."

But because they are rare, extreme risks can't be assessed via traditional techniques such as looking at their historical frequency of occurrence. Relevant data is often not available for sufficiently long historical periods, and even if it were, those involved would have to make very broad assumptions that the underlying processes had remained stationary. Identification and assessment of extreme risks is, therefore, difficult.

The Thinking Ahead Group at Towers Watson has been studying the issue of extreme risks since 2008 from a broad investor's perspective of global political, financial and economic stability. From this work, they have come to view the world as a series of inter-related complex adaptive systems, covering markets, political regimes and other social structures. These systems reflect the collective interactions of the participants (driven mostly by human behaviours) and have been increasing in complexity with advancing technology, increased speed of decision-making, expanded regulations and increased globalisation.

What is apparent is that a limited understanding of this complexity can have a material impact on the ability to assess and mitigate risk. Errors in the estimates of the likelihood of extreme events could be significant. For example, they may be much less extreme than originally thought. This has certainly been the pattern with '100-year' hurricanes and with financial market movements that bank risk models indicated were "in the range of 10 to 25 standard deviations from the mean."

Given that insurers are in the risk business, during the second half of 2013 we decided to gauge where insurers are with their thinking by asking executives from all around the world which extreme risks they currently rate as most significant to their businesses.

We used a relatively new way of gathering views and ideas - a Wiki survey - an approach that aims to overcome the constraints of multiple-choice-type answers and the impracticality for analytical purposes of free-form text responses.

A feature of Wiki surveys is that they allow respondents to add their own ideas to those seeded by the survey originator. Starting with a list of around 30 extreme risks, each survey participant was asked the simple question - 'Over the long term, which is the biggest extreme risk for the insurance industry?' - and presented with two of the extreme risks selected by an algorithm. They either clicked on the one they thought was the biggest threat or had the opportunity to submit their own idea.

The scale (over 30,000 votes were cast) and geographic diversity of the survey response suggests that this is a topic with which a broad cross-section of the industry is engaged. The final rankings are calculated as the estimated chance that the idea would win against another randomly chosen idea. So those at the top of the rankings (see Table 1) are predicted to win the most frequently.

Much as it is unsurprising to see pandemics and natural catastrophes figuring prominently in insurers' extreme risk thinking, the high rankings of cyber warfare and a user-submitted idea of data compromises in the cloud, provide encouragement on how the industry is keeping up to date with risk assessment.

In total, the survey produced 57 varieties of extreme risks. Delving further into the list also demonstrates the breadth of the ideas (see Table 2). 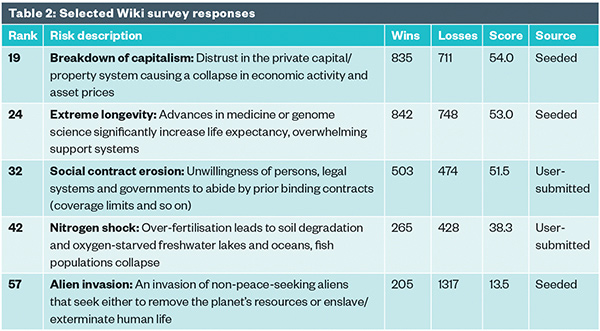 Identifying a range of extreme right-tail risks is all very well, but what of the implications?

Two of the user-submitted ideas in the top 10 - at number eight, an extreme event causing property damage, supply chain failures, business interruption and death on a significant scale, and number nine, the rise in extreme weather - were probably high in the rankings because of the recent memory of the 2011 Japanese tsunami and Thai floods. Both events had an unexpectedly large impact on international commerce as well as the insurance sector, and there are other areas similarly at risk. If a similar catastrophe were to occur in Taiwan, for example, the effect on the global electronics industry would be severe.

Looking further into the top 10 extreme risks identified by survey participants, the impact of a food/water/energy crisis includes a potential impact on morbidity and mortality, and the creation of investment winners and losers.

In the case of a sovereign default, as well as the impact on those insurers holding debt in the defaulting country, it would in all likelihood result in a regional insurance crisis and an increase in merger and acquisition activity due to forced disposals from banking groups.

The impact of a prolonged depression could also be complex. Although it would be likely to impact insurers' top-line performance adversely, based on the experience of many European motor insurers, the pressure on household finances tends to lead to a reduction in vehicle miles and in turn to reductions in claims frequency and an increase in profitability. In short, many of these extreme risks have far reaching impacts for insurers.

However, a recurring problem with extreme risk planning is its subjectivity and its reliance on the experience and creativity of those involved.

Impossible as it is to escape such limitations completely, a useful technique and framework is to define each extreme risk in three dimensions in order to help relate events to consequences - comprising the causal drivers, the precipitating events and the ensuing effects. So, taking the example of anarchy (number 21 in the list with a 53.8 score), the following analysis in the table below might result.

As for what insurers do with this information, the real issue is having a resilience plan in place. Extreme risk thinking will never be an exact science, so actions could mean increasing the robustness of a business to deal with shocks, for example by using instruments such as contingent capital. Appropriate reinsurance is also critical, as a firm that can survive a one-in-200 year event will probably be very profitable in  the aftermath.

Equally important is realising that the kinds of risks that could wipe out an insurance business do inevitably evolve  over time, and so should be kept under regular review.

This article appeared in our February 2014 issue of The Actuary.
Click here to view this issue
Filed in
02
Topics
Risk & ERM