The Lord Mayor's Message to the Livery Companies: The 686 plan has gone off like a rocket!

The Lord Mayors Appeal, the Power of Diversity breakfasts and conferences, the Charity Leadership Programme, and the Tomorrows City programme  have all started with a bang!

Going into 2014, I am feeling energised from my experiences as Lord Mayor so far. It was a pleasure to host the Masters and Clerks at my Address to the Livery in November and to introduce everyone to my '686 Plan', named after me being the 686th Lord Mayor. The four programmes that make up the 686 Plan - The Lord Mayor's Appeal, the Power of Diversity breakfasts and conferences, the Charity Leadership Programme, and the Tomorrow's City programme - have all started with a bang! 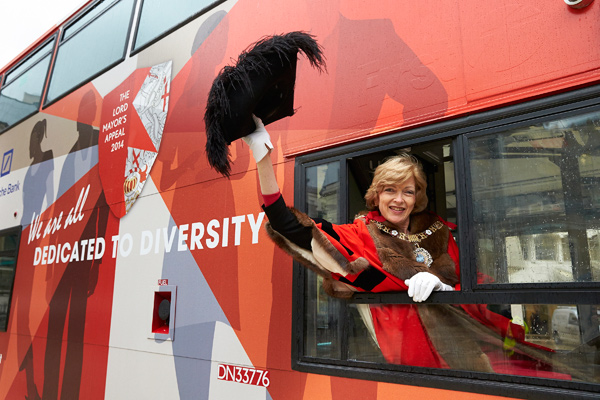 With your help, the appeal hopes to raise £2 million for four benefiting charities: Beating Bowel Cancer, Princess Alice Hospice, Raleigh International and Working Chance. Fundraising is at the heart of the appeal programme but there is also a strong commitment to mentor, help raise the profiles of these charities and open up new sources of funding for the future.

The first appeal event, Une Soirée Chablisienne, was held on the day I took office. Supporters of the Appeal spent the evening tasting the wines of Chablis and later cheered me on as I was installed as an honorary Pilier Chablisienne - a ceremonial process which involved me drinking a chalice full of Chablis while the piliers sang! The Lord Mayor's Christmas Party was also a great evening of festive fun and Dickensian feasting!

The appeal programme has a lot more in store. The Académie du Vin de Bordeaux will be co-hosting a wine tasting and dinner with me at The Mansion House on 12th February. On 14th April, Shakespeare's Birthday Party will be taking place in the atmospheric Middle Temple, where Twelfth Night was first performed! We will also be launching a Lord Mayor's Appeal Day in the summer, when the Square Mile will be transformed by events and activities fundraising for the Appeal, including a Human Table Football tournament in Guildhall Yard. This day will recognise and celebrate the good that the City can do and does do for society in an effort to reach a wider audience.

The power of diversity

The Power of Diversity programme has been designed to capture the benefits of diversity for the innovation that City businesses need to seize the opportunities of the "new normal". The first breakfast, Attaining Power, was a huge success as 100 of the programme's sponsors and an array of corporate managers engaged in a discussion about the skills needed to achieve power. The inspirational panel, chaired by Lady Barbara Jude CBE, revealed their key messages on how to progress your career and what you must do to strengthen the team around you at every level in an organisation. There are four more Power of Diversity breakfasts to come, as well as two major conferences taking place this summer.

I am also thrilled to announce that three TFL buses have been wrapped - thanks to our corporate sponsors and Sir Peter Hendy, the Transport Commissioner - to promote the Power of Diversity programme and the Appeal. Look out for the buses which are operating from Westbourne Park, Bow and Shepherd's Bush across London.

The Charity Leadership Programme features two City's Giving Lectures, which together will highlight some of the challenges and opportunities which impact the effectiveness of charities. William Shawcross, Chair of the Charity Commission and keynote speaker at the first lecture in November, said to the 300 attendees that the regulator intends to send clearer messages to those abusing charitable status and take more decisive action against wrongdoing. The second lecture will be given on 23rd January by Sir Ronald Cohen, who will provoke new thinking by focusing on philanthropic investing to achieve better social outcomes.

During 2014 there will also be three receptions providing the opportunity for charity Chairs, Chief Executives, funders and leaders to network and share experiences and knowledge. Each of the receptions will have a social focus; the first of which, taking place on 3rd March at Mazars, will focus on Social Welfare.

In keeping with my role as Lord Mayor to promote the business and financial service sectors, the Tomorrow's City programme is setting out how the City can best ensure its future success through long-term value creation. The opening events have focused on forward looking financial services regulation, integrated reporting and new models of long-term finance for infrastructure.

I hope you will join me for some of the evening events at The Mansion House and breakfasts at my home law firm, CMS, which will be continuing the dialogue of this programme.

If I have a single objective it would be inclusiveness, and Liverymen have so much to bring to the party. It has been a joy to see so many of your friendly faces over the last two months, and I hope to greet many more of you over the coming year.

Thank you for all you have done to support me as Lord Mayor and The Lord Mayor's Appeal. There is certainly more to come!

The Rt. Hon. The Lord Mayor of London

You can find out more about the Charity Leadership Programme and Tomorrow's City Programme at www.cass.city.ac.uk/lmclp and www.tomorrowscompany.com/city respectively.

This article appeared in our February 2014 issue of The Actuary.
Click here to view this issue
Filed in
02