Nick Silver started out as a traditional actuary, but now focuses on helping developing countries and promoting green investments. He talks to Kelvin Chamunorwa about working for the public good 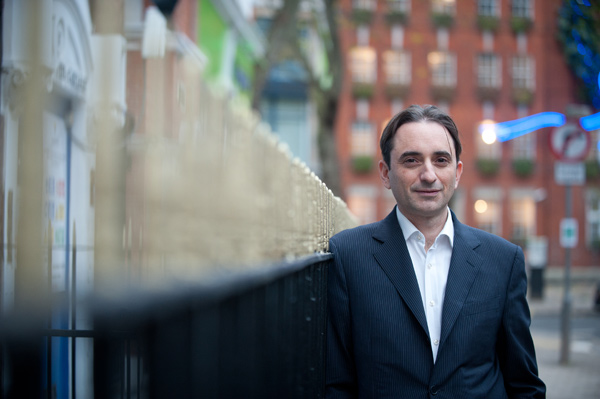 I arrive somewhat intrigued at the address Nick Silver had referred to as "my office": a private members' business club in the heart of the West End of London. It later turns out that this is where the influential actuary prefers to work and host business meetings when he is in town.

I can see why the club provides a conducive working environment - its secluded location, colourful furnishings and flood of natural light give it a calm and convivial aura - much like my impression of Silver himself.

Being an actuary and an economist, Silver's CV is not typical. He is managing director of Callund Consulting, where he advises developing countries on pension and social security policy, and co-founder of Climate Bonds, providing institutional investors with access to 'green' investments for either hedging or speculative purposes. Silver is also a visiting fellow at the London School of Economics and Cass Business School, a member of Council of the Institute and Faculty of Actuaries and a member of the IFoA's Resource and Environment Group, which he has previously chaired.

I look on while The Actuary's photographer takes snaps of Silver before we began the interview. He engages the photographer throughout the shoot, questioning him on lighting, colour balance, profile and other photographic aspects. Silver's questions are far from self-centred - his inquisitive nature seems to come from a genuine desire to expand his knowledge. This characteristic is confirmed as we speak about his wide-ranging experiences and how they have evolved over time.

Silver started his working career in 1991 as an actuarial consultant with Punter Southall then PwC in London, specialising in UK private sector pension schemes. He qualified as a Fellow of the Institute of Actuaries in 1995.

So how did the transition to international and green issues come about? He responds by explaining his personal motivation. "What gives me meaning is working for the public good," he says.

He goes on to describe the steps he took to start advising governments and other public bodies on the reform of their pension and social security policy. In 2002, he embarked on a Masters' degree in Public Finance Policy at the London School of Economics. Silver recalls: "After graduating in mid-2003 I pursued David Callund, chairman of Callund Consulting at the time, in a bid to get involved with international public sector consulting work."

It took a while, but eventually Silver's persistence paid off when he was assigned to his first project in Bosnia and Herzegovina in late 2003 and has been at Callund Consulting ever since. Silver views this role as his "bread and butter".

The way Silver got involved with public policy is in contrast to how he developed his work on climate change, which started with a voluntary role for the IFoA. In 2004 he joined the Resource and Environment member interest group. As one of the initial members of the group at a time when climate change was only just emerging into the public eye, Silver had the opportunity to build a network within the industry. He was one of only a few actuaries involved at the time and was often invited to speak at conferences. Perhaps inevitably, he began securing consultancy work. "I got into it by accident really as I was not actively looking for work," he admits.

Many of his projects on sustainability now find him because of his knowledge of insurance, risk and pensions. In hindsight, Silver thinks he was able to start work in the public policy and climate change areas at a higher, more influential, level than he would have had he not been an actuary. He declares that it's because of "the gravitas of an actuarial qualification".

I suspect that his willingness to learn and his way with people also played a significant part in the  successful transition.

So what does the future hold for professionals in the pensions industry? Silver's view is that the UK pension environment is highly regulated and hence there is a need for a large number of qualified professionals in the industry, including actuaries. He also believes that while the defined benefit pension market is shrinking, the ageing population means there will be a role for actuaries working in this space for many years to come. He asserts that much of it will be legacy work though; his view is that actuaries should be ready to apply their skills in related areas where there is financial uncertainty and risk that needs to be managed.

From a global perspective, Silver points out that there are many emerging economies in need of actuaries: "Each one of them has pensions and savings challenges, but with few qualified actuaries working in that space". He is currently working on a project with the National Social Security Fund in Uganda, and uses that country as an example: "The fund has 500,000 members and assets of around $1 billion, predominantly invested in Uganda government bonds. In the next few years, membership and assets are both expected to double. It is a booming economy with increasing demand for actuarial advice."

Surely actuarial work in developing countries also comes with its challenges, particularly where capital markets are not as advanced and data is scarce? Silver agrees and highlights the difficulty of developing long-term assumptions for actuarial valuations. He gives the example of risk-free rates of return, which can be "difficult to determine as some governments' bonds are in no way risk-free". In addition, there have been cases where there was no national mortality data to work with and he recalls that "in one small country we had to use the English Life Table rated up by 15 years as a  starting point".

Silver sees the technical challenges of performing actuarial valuations as relatively minor compared to the soft skills required to persuade stakeholders to take the necessary action. "Unlike in the private sector in the UK, where legal requirements ensure that action is usually taken, it is more difficult with public sector work in any country. That's where experience and a deep understanding of the culture helps to influence key decision-makers," he says. On the whole, he thrives on dealing with the varying and complex issues in each country, a lot of which are taken for granted when working in the UK.

In Silver's experience, many countries try to emulate Western regulatory models, like Solvency II, and this presents opportunities for him as an actuary with UK experience. He believes that the actuarial skillset is highly regarded, almost to the extent that stakeholders are prejudiced towards UK qualified actuaries.

In a lighthearted moment I take the chance to ask if the actuarial 'premium' is reflected in his consultancy fees. He sidesteps the question by talking about some of the perks that have come with his work, like having an audience with influential individuals.

The previous week, he attended a lunch event on food security at St James's Palace and had a conversation with Prince Charles. I ask what they spoke about. Never one to miss an opportunity with those who have the power to drive change, he says: "Rather than talk about food security, I told him his speech at the recent National Association of Pension Funds conference was very helpful (where he urged institutional investors to better address sustainability issues in their portfolios), and he should keep pressing on this issue."

Earlier this week Silver was in the government office's in the palace of the Emir of Abu Dhabi where he is advising on the reform of the pension system.

Silver also takes time to experience the countries he works in. Unsurprisingly, he says he mostly enjoys engaging with local people, arguably the ultimate beneficiaries of his expertise.

I was curious to hear more about climate bonds and how the initiative addresses climate change. Silver describes its objective as: to provide institutional investors, particularly pension funds currently invested in the fossil fuel economy, with an opportunity to invest in 'green' initiatives. His view is that in many countries, particularly those with sunny climates, the economics of energy supply is tipping towards solar energy. Thus the initiative provides access to investments that will generate renewable energy. He believes that as London is a major financial centre, it is a good place to start.

I ask him why the focus of financing sustainability ventures is through bonds. He uses the example of the cash flow profile of a wind turbine, which requires a large upfront investment to build and then once it starts producing electricity generates a regular stream of income. The bond can then be refinanced quite cheaply, or repackaged like a mortgage-backed security.

Climate bonds are a relatively new asset class and the idea is to make them investment grade and thus move them into the mainstream of institutional investors' portfolios. Silver believes that this is a significant part of the solution towards a low-carbon economy.

As for the actuarial profession, Silver's view is that it is not enough for actuaries to be technically astute, as that is generally taken as given. He gives the example of the declining number of actuaries on boards of insurance companies, which demonstrates the need for strong leadership and communication skills, but more importantly, a more adventurous attitude towards assuming responsibility in areas outside our comfort zone. He believes that only then will actuaries be able to increase their influence and relevance, resulting in a more significant role to play for the benefit of society.

Silver is a warm and very likeable personality. We spoke at length until there was just enough time left for him to pack up for the day and pick up his daughter  from school.

With such a busy work schedule including regular international travel, I ask whether he manages to find time to read The Actuary. He tells me he peruses articles as he travels. Pre-empting my next question, with a gleeful smile he adds, "and I always recycle my copy after reading it, of course".

This article appeared in our February 2014 issue of The Actuary.
Click here to view this issue
Filed in
02
Also filed in
Interviews