Blights and boons of financial repression

Can government interference in the financial markets aid or damage a country? Paul Fulcher and the financial repression working party share their insights 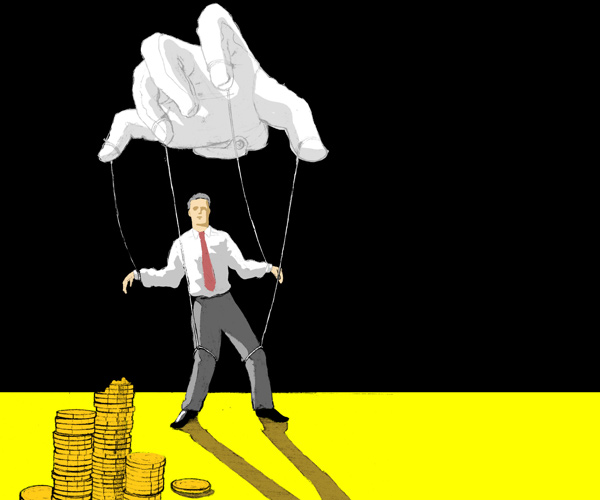 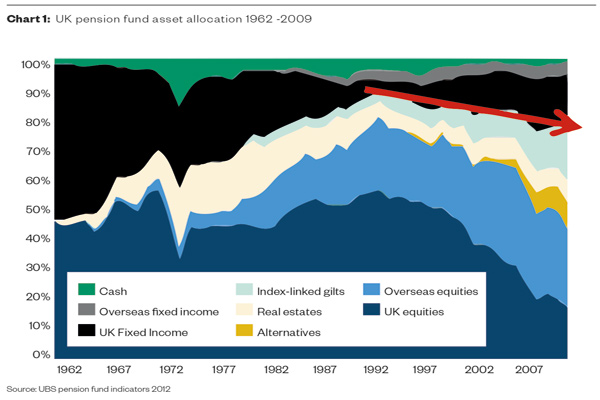 Financial repression is an emotive term that stems from different political opinions on what is a legitimate interference of the state in the financial markets, so even within the academic literature there are differences about what it means.

One of the best general descriptions can be found in Shaw and McKinnon (1973). They define it as any distortion of the domestic capital markets by the government that channels funds to themselves which, in a deregulated market, would go elsewhere. Reinhart and Sbancia (2011) give a more specific list of items that might constitute the government distorting markets:

i) Explicit or indirect caps or ceilings on interest rates

iii) Supporting measures like the direct ownership of banks.

Some would argue the existence of negative yields on index-linked bonds is evidence that some form of financial repression must be taking place. Why would anyone voluntarily invest in a product that is guaranteed to lose them money in real terms?

Have measures that were introduced under the label of 'prudent regulation'

forced institutions into holding assets a rational investor with a similarly long-term horizon would not buy? The presumption that government debt is risk-free in comparison to private sector securities is also a factor in artificially lowering funding rates for governments.

Have government bonds now become a 'Giffin good'? Do regulations force banks, insurers, and pension funds to hold more bonds as their price rises? Does this explain why investors perceive there to be a shortage even though, in reality, there are more bonds than before the start of the financial crisis after allowing for quantitative easing?

The counter argument is that this is just about global demand and supply. In the absence of good investment opportunities and with a global glut of savers it is inevitable that rates of return will be low, if not negative. Right now, having some certainty that you will be able to consume in the future is more valuable than consuming today. Purchasers of index-linked bonds are happy to pay a premium to issuers for looking after the purchasing power of their money.

Is financial repression a natural consequence of the financial crisis?

The normal argument against financial repression is that forcing investors to hold government bonds means they are not able to invest in equities or other assets that would give industry the capital to invest and boost the economy. However, Richard Koo (2011) outlines the concept of a balance sheet recession and why in these circumstances governments need to take the debt onto their balance sheet in order to kickstart the economy.

If a bubble - let's say in real estate - builds up, then subsequently bursts, the balance sheets of the companies and households show higher liabilities than assets, since the bubble has burst and their assets are worth far less than before. However, since recognising this could lead to the economic ruin of the borrowers and they are still able to service the loans they have taken out, the solution is to pretend and carry on, as it is not in either the banks' or the borrowers' interest to accept the economic ruin. In such a situation, monetary policy will not be effective in stimulating economic growth since all parties will try and reduce debt even if this is at the expense of future profits. Regardless of the very low rates of interest, nobody wants to borrow any more money. As a result, governments step in with fiscal policy. This is described as the government becoming the borrower of last resort.

The expansion of government debt seen since 2008 is the direct result of bringing much of the private sector's debt onto the government's balance sheet in this way. However, this policy does have consequences. Savers may benefit if the policy prevents a crash in asset values but will suffer from lower rates of return on their savings. Borrowers will benefit from the low rates of interest. 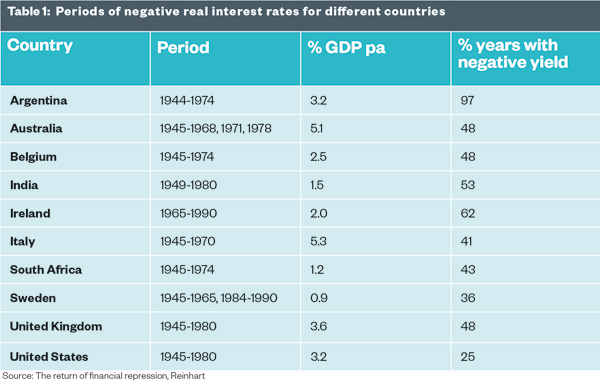 What does history tell us about financial repression?

Reinhart and Sbrancia (2011) identified how important financial repression was in allowing governments across the world to shrink the level of government debt (as a percentage of GDP) in the three decades after the Second World War.

Table 1 shows the periods of negative real interest rates for different countries, how much the savings for the state have been as a  % of GDP per annum and the percentage of years within the period savers received negative real yields.

In the UK, for example, between 1945 and 1980 the equivalent of on average 3.6% of GDP p.a. was the equivalent of a net tax on savers for keeping their money in government bonds. The negative real interest rates that governments were able to pay in this period kept tax rates lower that they would otherwise have been and was arguably one of the stimulants to the economic growth that was seen in this period.

Are insurers and pension funds impacted by financial repression?

The working party attempted at a very high level to overlay some of the key regulatory developments with a history of the investment patterns of UK institutions. In both cases there have been changes that may have influenced insurers and pension funds to increase the proportion of assets invested into government debt.

Chart 1 (p28) shows that the net allocation of defined benefit pension funds to equities has been declining since the beginning of the 1990s, while the exposure of pension funds to fixed income securities (including those issued by UK government) has been steadily increasing. Table 2 shows the events that have played a part in changing the nature of pension promises and the way in which they impact scheme sponsors.

Examining the allocation to equities within the with-profits funds of some of the UK's large life insurers shows that the amounts held in government bonds have increased since the beginning of the century. The bursting of the dotcom bubble and the introduction of the realistic balance sheet could be argued to have had an influence in driving this. 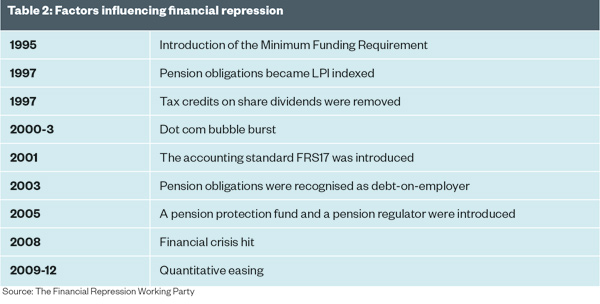 Although financial repression may have been a factor in bringing down government debt-to-GDP levels in the post-war period, it isn't clear the same thing is happening in the UK today.

Whilst the measures introduced are aimed at bringing the economy back on track again, the redistribution of wealth that is likely to follow from these measures appears to be a by-product rather than a deliberate goal.

The working party is continuing its work

Over the course of the last year its deliberations have moved on to a broader set of discussions on the winners and losers from government policies to deal with the financial crisis.

Government policies that have played a part in keeping real interest rates low (at the time of writing, yields are negative on index-linked gilts with durations of less than 15 years and effectively zero at durations longer than this) have also transferred wealth between different groups in society. Primarily the transfer has been from savers to debtors, but in the political space this is played out as a transfer from old to young and between regions. Others will need to reach judgments about the fairness of these wealth transfers and the extent to which the broader public is aware of them.

Reinhart, and Sbrancia. The Liquidation of Government Debt. 2011. http://www.nber.org/papers/w16893.

This article appeared in our December 2013 issue of The Actuary.
Click here to view this issue
Filed in
12
Topics
Risk & ERM