Solar: A force to be reckoned with 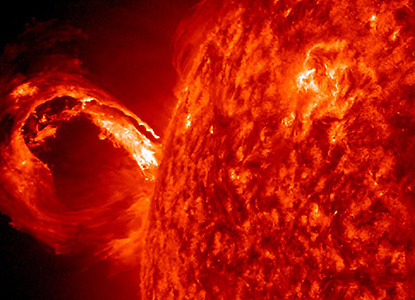 As John Allen (Jack) Eddy, an astronomer, said: "The sun is neither constant nor entirely beneficent. As a variable, magnetic star, it is ever-changing in many ways: most often through violent explosions and eruptions of colossal scale. The glowing, gaseous surface that appears so perfectly white and still from far away is in reality a roaring, roiling arena of continual conflict and eruption."

The climate is constantly evolving. Some change is undoubtedly caused by mankind, but much is caused by natural forces. In 2008, the Intergovernmental Panel on Climate Change (IPCC) predicted dire consequences for Earth due to increasing atmospheric carbon dioxide. Its latest (2013) report continues to advocate this, even though the panel cannot satisfactorily explain the pause in warming since 1997 and the likely cooling from 2005. The IPCC suggests this pause is caused by natural variations. To understand these, it is necessary to understand solar activities and its cycles. 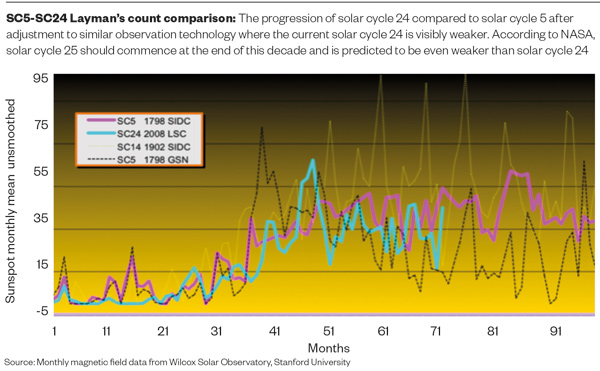 Low solar activities have implications for climate change. It is known that large-scale seismic events occur more frequently during periods of low solar magnetic storm activity. During the last millennium, these periods of higher seismicity coincided with 'little ice-ages'. As these seismic events nearly always occur along tectonic plate boundaries, their incidence rate is indicative of the level of the movement (with lags) of tectonic plates. One would therefore expect a correspondingly higher level of volcanic activity. Unfortunately, world-wide volcanic activity records are too poor to prove that the level of volcanic activity has changed.

Large-scale volcanic activity does have a  direct effect on the climate. For example, two very large eruptions during the Dalton Minimum, one in 1809 and Mount Tambora in 1815, were the cause of the coldest decade in several hundred years. Similarly, large-scale volcanic activity occurred in the middle of the 17th century during the Maunder Minimum, which also coincided with a period of very low solar magnetic activity. During the earlier Wolf Grand Minimum, the Samalas volcano erupted on the Indonesian island of Lombok in 1257. This eruption was at least twice as big as the Mount Tambora eruption and is said to have precipitated the first mini ice-age of the second millennium, which became known as the "dark ages". The global temperature drop caused by Mount Pinatubo's eruption in 1991 is well documented in IPCC climate records. 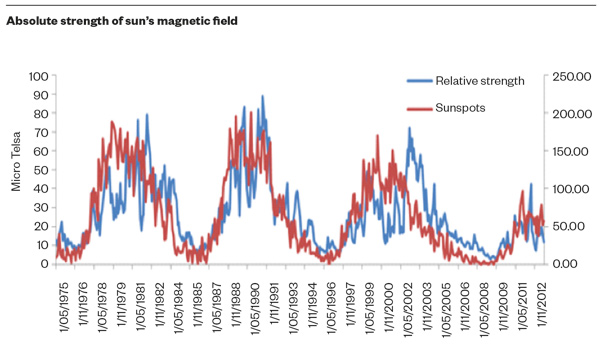 My paper on The New Grand Minimum in May was provocative. There is no consensus among scientists as to whether the sun is returning to a grand minimum state, even though it is generally understood that all stars spend about 15% to 30% of their time in this state. NASA's sun-climate report predicts: "Indeed, the sun could be on the threshold of a mini-Maunder event right now. Ongoing Solar Cycle 24 is the weakest in more than 50 years. Moreover, there is (controversial) evidence of a long-term weakening trend in the magnetic fi eld strength of sunspots. Matt Penn and William Livingston of the National Solar Observatory predict that by the time Solar Cycle 25 arrives, magnetic fields on the sun will be so weak that few if any sunspots will be formed. Independent lines of research involving helioseismology and surface polar fields tend to support their conclusion".

But many scientists disagree with Livingston and Penn. The alternate view is that this new grand minimum will be weaker than the Maunder Minimum and therefore much more like the Dalton Minimum. The conclusion actuaries should take from these opposing views is that a grand minimum has commenced and we should try to understand how it will affect many of the risks that we only have ever quantified when the sun's magnetic activity has been more robust. The graph above shows the sun's monthly average magnetic fi eld strength since solar cycle 21 along with the Solar Institute Data Centre's monthly sunspot numbers. The monthly magnetic fi eld data is obtained from the Wilcox Solar Observatory at Stanford University.

It takes at least 100,000 years for the heat generated by the nuclear furnace at the core of the sun to reach its surface. Only 60% of the energy emitted by the sun that reaches Earth actually makes it to ground level. The rest is absorbed by the atmosphere or re-radiated back into space. Greenhouse gases, including carbon dioxide, water vapour and ozone play important roles in this re-radiation of the sun's energy back into space just as they do in re-radiating energy from Earth.

The hydrological cycle is important in the transferring energy from the oceans to the atmosphere. For example, when water vapour turns to water droplets in the atmosphere it produces 540 times the heat it takes to heat water just one degree Celsius, and similarly vice versa when water is converted to water vapour. On the other hand, carbon dioxide does not transport heat from the Earth's surface to the atmosphere, because it doesn't have a liquid state. It freezes directly into dry ice at -78.5 degrees Celsius but the atmosphere seldom gets that cold except for the lower stratosphere at the poles during late winter and early spring. The amount of heat released by carbon dioxide when it turns into dry ice is about one quarter of the amount of heat released by the same weight of water vapour when it is turned into water. Dry ice never reaches the ground before it returns to carbon dioxide. So unlike snow, hail or rain, dry ice reabsorbs the energy that it provided to the atmosphere when it formed. Both dry ice clouds and water ice clouds have similar properties in that they reflect the sun's rays back into space and reflect heat radiation from the Earth's surface back to Earth.

The table (on page 32) is from the New Grand Minimum paper. It helps explain why grand minimums tend to affect the northern hemisphere more than the southern hemisphere. It also explains the role of the oceans in moderating climate change.

Both atmospheric water vapour and carbon dioxide have the property of absorbing and re-radiating heat, whether the heat is going to or coming from the Earth. However, these properties work in different spectrums. Water vapour does this over a very wide range of the infra-red spectrum and carbon dioxide does it over a couple of tiny ranges of the infra-red spectrum that are not influenced by water vapour. Some scientists suggest that carbon dioxide may absorb and re-radiate heat over wider ranges if its atmospheric concentration is increased but so far this suggestion hasn't been proven. Others suggest that as atmospheric carbon dioxide increases, it forces an increase in the concentration of water vapour in the air - but the forcing mechanism is unknown. These suggestions also seem unlikely as the much higher levels of atmospheric carbon dioxide that have occurred on various occasions in Earth's multi-billion year history would have then caused runaway global warming from which the planet's ecosystems could never have recovered. The Earth's ecosystems have only evolved because nature mostly provides negative feedbacks.

The sun also has a top-down effect on atmospheric temperatures due to its highly variable output of ultra-violet (UV) spectrum photons. The total extreme ultra-violet output between solar cycle 22 and solar cycle 24 has reduced by some 60%. Almost all of the high energy photonic output of the sun is absorbed in the Earth's upper atmosphere where it provides the energy to form ozone and

of the bottom of the stratosphere. However, the lower energy UVA and UVB range of photons provide a countering effect by destroying ozone.

In January 2013, NASA released details on how lower extreme UV emissions affect climatic conditions. It suggested that the jet streams are altered due to temperature changes in the polar stratosphere, because of variations in ozone production. It is these altered jet streams that affect the tracks of storms and, by implication, other

Studies show that jet streams have generally become more erratic and are circulating further from the poles than was the case 15 years ago. Airline pilots confirm this. It is the reason why there are unusual hot and cold, wet and dry extremes occurring across the globe. We should

expect much more of these extremes in the coming decades.

The incidences of natural risks change when the magnetic strength of solar cycles wax and wane. The sun is currently having the most magnetically weak cycle in 200 years and this is expected to be followed by an even weaker cycle through the 2020s and well into the 2030s. Historical records over the last 500 years give an indication of what risk changes can be expected to occur during these periods known as solar grand minimums. The actuarial profession should therefore be studying the historical links between the climate and decadal changes in solar magnetic storm activity to assist in natural risk assessments. The profession should also be seriously questioning the outcomes of unreliable climate models that have been produced by scientists who, by and large, do not have an actuary's ability to see the bigger risk picture.

As quoted in NASA's sun-climate report "Understanding the sun-climate connection requires a breadth of expertise in fields such as plasma physics, solar activity, atmospheric chemistry and fluid dynamics, energetic particle physics, and even terrestrial history. No single researcher has the full range of knowledge required to solve the problem." This sounds broadly similar to the diverse skills one has to acquire to become an actuary.

This article appeared in our December 2013 issue of The Actuary.
Click here to view this issue
Filed in:
12