Living in the fast lane 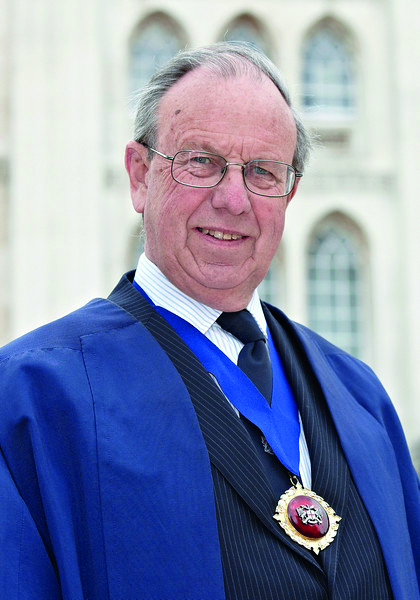 For someone who didn't know what an actuary did, Kenneth Ayers, Esq, MBE, hasn't done too badly! Ken is, of course, no stranger to actuaries in the city having been a founder member of the Worshipful Company of Actuaries. Unsurprisingly, conversation with him was punctuated with a few interesting twists and turns that have shaped the career of this seemingly unstoppable man.

Having recently stepped down from his role as chief commoner of the City of London Corporation - there is no evidence that Ken will now sit back and reflect on a career bursting with energy, opportunity and his mould-breaking approach to conducting business. His view on retirement is forthright "Pensions starting at 65 are a nonsense, they should be at least 75", but more on this later.

His listing in Debretts easily illustrates the accomplishments of someone who has witnessed and indeed been party to many a change in the actuarial and stock broking professions. Ken patently understood the mechanics of the industry though he insists his successes were mostly "Extraordinary good luck".

Steely determination, hard work, long hours and drive - often literally, given Ken's interest in motor sport - belie his run of luck. Listening to his own character analysis it's plain to see how this actuary advanced "I never give up on anything" and "I have a personal trait, when I do something I want to be good at it, I want to do a lot of it, so I grab it with both hands".

On advice to trainee actuaries, Ken suggests some inward reflection "Are you really sure you're going to stick at this - it's a personality thing. Most people know if they're determined or not. You've got to be certain". Beyond these perseverance attributes he considers a good actuary needs not only a "Bedrock of knowledge and experience" but an ability to remain "Human and broad-minded when combining technical aspects" to formulate advice.

Reasoned perspective coloured his conversation on the financial crisis "We were in uncharted territory, the best brains got it wrong". Again broadmindedness featured as a solution "It's necessary not to apply rigid rules, we need to be open-minded as financial crises are still not understood".

With strong views and a paper on the matter Ken declares the consequences of the state pensions age a "Disaster that we knew was coming. It's an extremely difficult bullet for governments to bite because it was always going to be unpopular. Pensions at 65 have been nonsense for years - unaffordable. The pension age ought to be at least 75 now - or even more, because people are living longer and are active for longer. This attitude of the state paying for you to have relaxation just because you've arrived at a particular age is nonsense - unaffordable. So, we've now got a pension age that they're creeping up, but it still means pension funds are not viable financially".

During his year as chief commoner, Ken says he "Had the extreme good fortune of being in the post in the year of the Jubilee, the Olympics, the Paralympics and Lady Thatcher's funeral", in which he played a large part. The job was "Absolutely unending, incredibly tiring, and required being very hands on". Over the course of the Olympics "The part I played was back up. I happened to be hosting an overseas visitor in the velodrome when Chris Hoy got his gold - the noise was painful, the atmosphere was so fantastic". He welcomed the input of his team, "Someone in the Corporation suggested we offer the Freedom of the City for all the medal winners connected to London - it was a brilliant idea - the list was a hall of fame of the Olympics".

Ken Ayers is a very dedicated and considered operator, who clearly relishes his work, he smiled proudly when he said of the Jubilee "I shook 47 Royal hands - each one was wonderful!" In summary of his eventful chief commoner year he beamed "It was totally fantastic and unbelievable - I was so lucky it's ridiculous!" As for what's next - his answer needed no thought "It's a great life - I never want to stop working!"

This article appeared in our December 2013 issue of The Actuary.
Click here to view this issue
Filed in
12
Also filed in
Interviews