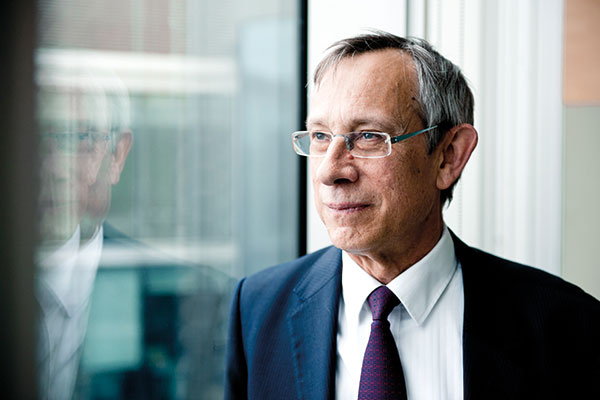 Can you give us an outline of your career experiences?

I started my career in 1973, at a firm called Bacon & Woodrow (B&W). I qualified as an actuary in 1975 and became a partner in B&W in 1983. My work until 1986 was primarily in the pensions field, as actuarial consulting was then dominated by pensions. However, as I worked closely with Sidney Benjamin - one of the most innovative actuaries at the forefront of the actuarial profession's push into general insurance - I became more involved in life and general insurance. B&W had by then linked up with Milliman, who had a large property and casualty practice in the US. So in 1986, I took the opportunity to work in the US for a short stint, and on returning to the UK I focused on, and set up B&W's general insurance work as a distinct practice.

During the 1990s, I concentrated my efforts in mergers and acquisitions work around Europe. In 2000, B&W took the decision to de-merge the pensions and insurance arms, with the insurance arm going to Deloitte in 2001. I returned to the UK, and eventually parted company with Deloitte in 2005.

In 2006, I became a member of the Board for Actuarial Standards (BAS), a non-executive director for the Medical Defence Union (MDU) and I was also interim chief actuary of Codan (RSA's Scandinavian subsidiary) helping them implement a Sarbanes Oxley-compliant reserving system in a short period, which was an interesting challenge. In January 2008, I became interim director of the BAS for six months and we laid down the structure of the TASs and a timetable for their implementation.

In June 2008, I moved to Ernst & Young to help introduce their new European actuarial services framework. Within a year, Solvency II work kicked off with a vengeance, so I refocused my attentions back to the UK. Incidentally, I set my retirement date to be six months after Solvency II went live, so I could wind down and hand over all my projects in a  timely fashion. I saw no reason to alter my retirement plans just because the legislation failed to meet its deadline.

My career has spanned the introduction of computers to the actuarial world. When I started work we used to collate and summarise the data manually. The factors for the calculations were produced on a mainframe computer, with programmes being produced on punched cards in Fortran. One then reverted to a manual process to apply the factors to the data. I have always been interested in computing. I like to think this is in my history as my father met my mother at Bletchley Park during the Second World War. I worked hard to embed computing into all the actuarial processes I was involved in - for example, in pension fund valuations trying to replace the approximations required in applying factors to value benefits with cashflow projections so the benefit could be accurately represented at each duration.

In the late 1980s, when the desktop PC became the norm in offices, I tried to ensure everyone in my team had one on their desk as early as possible. There was a lot of innovation back then, and although I am not claiming that I did the actual developments, I created an environment and culture to allow my team to generate that innovation. We did a lot of interesting things without having a formal business case. Today, I suspect we are too obsessed with getting a case put together to justify an investment. Sometimes we just need to take a few punts and hopefully one will work.

Communicating the results of my work to the person who is paying in such a way that they can clearly understand the information and take a decision based on it. Sidney Benjamin, who was a brilliant speaker and communicator, instilled in me the need to keep things simple and not to build over-complicated models.

It has a good reputation, but it needs to maintain it. It needs to get more involved in public affairs, which it has started to do. It needs to start thinking about how it becomes a champion of the consumer. There have been too many instances when it has produced solutions that are possibly not in the interest of the person on the other side of the process. The earliest example I can think of in my career is the way unit-linked contracts were designed in the 1970s, which effectively concealed how much of the first two years' premiums were going in commission.

It is a profession that has allowed me to have a wide and varied career, but you have to be willing to seize opportunities. It is too easy for people to sit back and just carry on doing the same thing day after day.

Setting up GIRO was excellent, as it provided a framework and forum for new ideas to be discussed in general insurance. However the event has morphed from being quite an altruistic forum into something that is too big and less focused on new ideas and thoughts and more on building individuals' brands.

Did you always want to be an actuary?

Yes, amazingly! I was always interested in mathematics, and back in the late 1960s/early 1970s there were few jobs for mathematicians where you would be well remunerated. For example, there were no quants and computers were only just starting to arrive in the business world.

Where do you see the profession is going?

The core defined benefit pension market is in decline, and life insurance is either in a state of stability or decline. General insurance has grown rapidly but it could have plateaued now. So the actuaries need to explore new avenues, such as banking. I find it amazing that we are not more involved in building and controlling the banking models. I think the core skills that an actuary learns could be much more widely applied in the business world.

How about risk and capital models?

The risk function looks like it is here to stay as things are enshrined in legislation. Over the last five years, we have built models to calculate capital numbers, either by a 'standard' formula or a complicated model. I defy any actuary to prove that these complicated models materially add value to a company.

I have seen this issue often before. A lot of time and effort is spent on tweaking and perfecting a model. However then we need to choose assumptions to make it useful. The judgments involved in choosing the assumptions completely outweigh the effect of the very minor refinements in the model. As a result we have a model that is unstable and too complicated to communicate properly. We need to remember we are in the business of trying to solve business problems and keep our models as simple as we can.

The main risk to a company is the CEO. It is the CEO who establishes the culture. If this is right, things will broadly go ok. Companies do not go bankrupt because of the mathematical models, even in banking. It was not the models, it was the culture to push things to the limit.

What's next for you?

I will continue my non-executive director role at the MDU, and hopefully I will pick up a couple of other similar roles. I may also look into a regulatory role, similar to my one at the BAS. Personally, I want to continue travelling, with my shortlist of places to visit being Myanmar, Bhutan and Northern India. I also intend to enrol into the second year of the film studies course I started in 2005 and maybe a course on art history. Further, I am contributing to two workshops at GIRO this year. The first, which I am leading, looks at practical issues PPOs raise and in particular how to invest for them in practice, and the second is on communicating to the board.

Do you think volunteering within the profession is important? Have you been involved?

Yes, it was how GIRO started. I was on the committee that ran the Student Society, now SIAS. I have also written a few papers. The advantage of volunteering is you meet a wide range of people, which helps expand your network and can be a source of new ideas. I also think you have a duty to give back to the profession by doing things that need to be done. For example, at least mark as many exams as you have sat in the past. Otherwise the system grinds to a halt.

What challenges have you faced in your career?

When building general insurance during the 1980s, the main issue was delivering difficult messages to some very senior and entrenched individuals. Over the years, I think we have helped to break down the barriers, and build trust. Most people tend to want to listen to what we have to say now. But we have a duty to explain things clearly and simply. The recipients need to understand what we are saying, and why it matters to them. They have other jobs and often think in very different ways to actuaries, so we need to put ourselves in their shoes in working out how to deliver our messages.

Over the years, every project I have worked on can broadly be boiled down to three sections: problems with data, data analysis, and communicating the results. Interestingly, the time spent on sorting out the data is still a significant portion of the job, we then spend too much time on the analysis and not enough on the communicating the results. Interestingly, this has not changed in the last 40 years.

Will Solvency II ever happen?

I think so, in some shape or form. It will be interesting to see if the political will is still there. If it had rolled out when it should have, then it would have set out a framework for the way in which capital could be calculated and other territories might have simply adopted it. But now countries are developing their own regimes. For example, both China and Singapore are progressing with systems that may be similar to Solvency II, but will, no doubt, be irritatingly different.

This article appeared in our December 2013 issue of The Actuary.
Click here to view this issue
Filed in
12