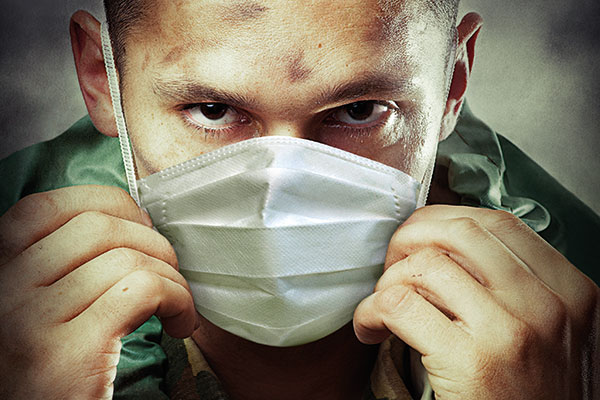 Nearly 100 years later, pandemic risk remains the most important mortality exposure for the insurance industry and is placed above other forms of catastrophic event including natural catastrophes, nuclear explosions, and terrorism.

A plague of pandemics

Humanity faced three worldwide pandemics in the 20th century: the Spanish flu, the Asian flu (1957-1958) and the Hong Kong flu (1968-1969). Each of these outbreaks affected approximately a third of the global population. In each case, the vigorous attack rate was due to the lack of human immunity to a new strain of an influenza virus, born from a genetic mutation in an animal virus, making it capable of spreading to the human population.

In the 21st century, the population has already faced three alarming outbreaks, which were fortunately contained due to the absence of two major factors: effective human-to-human transmission and high lethality. The 2005 H5N1 avian flu and the 2013 H7N9 bird flu presented terrible mortality rates among the infected human population - 60% in 2005 and 32% in 2013 as at June 2013 - but their mode of transmission was essentially bird-to-human. Conversely, the 2009 swine flu infected people from 21 countries in just a few weeks but, as it was an H1N1 strain, its lethality was limited due to previous exposure (1918-1943) and an immunisation programme in 1976.

Exposures to pandemics are therefore clearly important to insurers, not least because pandemic risk represents a significant regulatory capital consideration. Under the European Union's Solvency II standard formula, the solvency capital requirement (SCR) for life catastrophe risk is 1.5 per mille times the total death capital at risk based on a 200-year return period pandemic scenario.

However, according to historical data, pandemics are large enough to destabilise the insurance market more than once every 200 years, with three global pandemics recorded in each of the last three centuries. This suggests that the majority of people working in the insurance industry today are likely to face at least one pandemic during their careers.

Insurers should be aware that now is the time to anticipate and educate themselves on pandemic risk, and begin to model it.

The World Health Organization (WHO) issued its first pandemic preparedness guidance in 1999, which has been revised twice in 2005 and 2009. In June 2013, the WHO announced that a four-phase alert system including inter-pandemic and post-pandemic levels would soon replace its six-phase system. Most of the current pandemic reinsurance treaties structured as catastrophe excess of loss refer to the current six-phase alert system in their trigger definitions, and the new version is likely to disrupt this modus operandi. 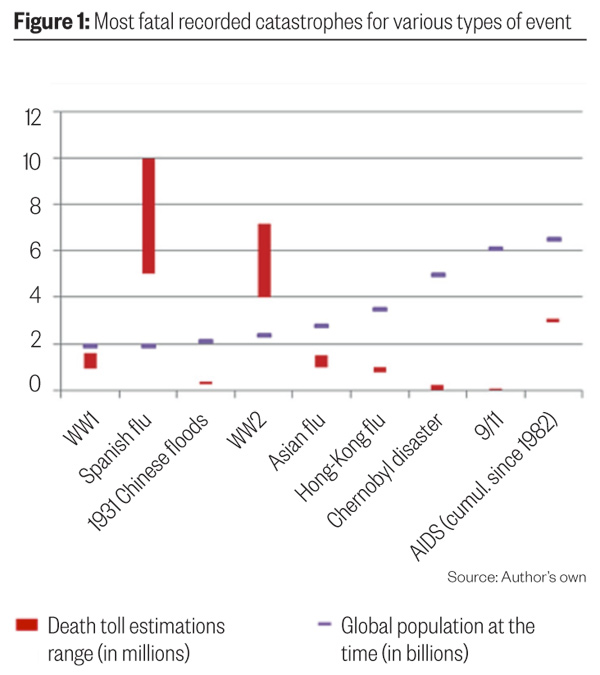 Alternatively, other covers of pandemic risk could be aggregate excess of loss where the attachment point is an annual total amount of loss or cat bonds where the trigger is an increase in mortality rates as reported by an official source such as the Centers for Disease Control and Prevention (CDC) in the US.

To price these covers, the most sensitive parameter is also the hardest to calibrate - the excess mortality rate or the mortality ratio among the infected population. This is because it is difficult to deduce from historical data. Mortality risk, in the case of a pandemic, hugely depends on the age of those infected, thus the parameter is more likely to be a mortality table rather than a unique rate. To a lesser extent, mortality risk also seems to be correlated with socio-economic status and pre-existent chronic diseases but not gender.

Since the Spanish flu in 1918, the discovery of antibiotics in the 1930s and the progression of vaccination campaigns in the 1950s helped to reduce the fatality of seasonal influenza epidemics as well as the two later pandemics (1957-1958 and 1968-1969). And since the end of the 1990s, most developed countries have completed their preparedness plan for pandemics at the request of the WHO. These plans include emergency measures to slow the spread of a flu outbreak such as closure of public transport and schools, and strategies to optimise medical care such as vaccination programmes and monitoring. These measures are believed to significantly mitigate the impact of a pandemic, though only a few countries have quantified the impact of such measures.

The good news is that, even if the insurance market seems largely ill-prepared, the national preparedness plans can help in model calibration. They tend to include results of local epidemiologist studies on the expected consequences of a future pandemic, including the number of deaths and hospitalisations. A good example of this is the French preparedness plan which ncludes as-if scenarios of the Spanish flu. The plan comprises very useful data from the Institute National de Veille Sanitaire (INVS), the French national institute of health monitoring, pertaining to associated hospitalisation and mortality rates per age band. And all national plans are filed by the WHO and are available for free on the

But not all countries have ready-made as-if scenarios. In the case where the exposure for an insurance portfolio is from a non-modelled country, the best approach is to calibrate parameters using a country that has similar historical pandemics and seasonal flu epidemics. Some commercial life catastrophe models have recently been released in the market, providing loss estimations per return period for insurance portfolios within their geographical scopes. However, as their geographical scopes are partial, exposures can still exist for a non-modelled country.

Length of the event

Another major aspect in pandemic modelling is length of event. Unlike natural catastrophes which are instantaneous events, pandemics last several months, not to say a few years. And they occur in distinct waves, which tend to be stronger during the winter periods. This means the events are likely to cross calendar boundaries, and it has many consequences for modelling pandemic risks.

Applying 100 percent of the total expected loss on a single calendar year, rather than spreading the estimated loss accordingly to the length of the event and its strength over the time, would lead to an over-estimation

of reinsurance cost and the required solvency capital.

Historical data show that pandemics tend to last longer in some countries than in others. This is partially explained by their geographical situation (for example, latitude, size, frontier neighbours).

Therefore, even if convenient, insurers should resist the temptation of considering their exposures in a modelled country, when their portfolio is actually exposed in a non-modelled country.

risks should consider the high capital requirements for life and health catastrophe risks that Solvency II standard formula demands. It may be advisable to consider building a partial internal model but bear in mind the regulator's approbation requirement on detailed documentation and validation.

Pandemics are not only theoretical events causing the largest modelled losses for life and health insurance. They are real phenomena with a frequency at once high enough for us to get prepared for the next one, and so low that historical statistics are not enough to calibrate a model precisely.

As commercial cat models currently present several weaknesses, including limited geographical scope, lack of flexibility and lack of transparency, therefore it is essential to have a correct level of expertise and utilise the results from epidemiologist researches to monitor exposure, appreciate reinsurance options or build an internal model.

Acknowledgements: The author would like to thank Irfan Akhtar and Marc Beckers for their comments and contributions to this article