Back in August 2008, Alistair Darling caused a stir when he told the Guardian that Britain was facing "arguably the worst" economic downturn in 60 years. It turned out to be true, but the then chancellor of the exchequer still found the "forces of hell" unleashed on him - and much of the opprobrium came from his own side.

Gordon Brown, already under huge strain as prime minister, was not keen on his next-door neighbour going off -message. The result was a weekend of fraught conversations between Numbers 10 and 11, and allegations of anti-Darling press briefings - apparently orchestrated by Brown's spinner-in-chief Damian McBride.

Five years on and Darling insists there are no regrets. Speaking to The Actuary in his remarkably uncluttered Westminster office, the veteran Labour politician says he had a responsibility to warn the public of what was coming.

"If you are the chancellor, you have a difficult task because with everything you say you are very conscious that you can have a profound effect in terms of spooking the markets. But I was looking at the numbers every day and the situation was getting worse."

Darling says he was just stating the "blindingly obvious", and was surprised at the reaction. But, in many respects, the fallout from the interview was the start of a tumultuous period in UK and global economic history. Having already been forced to nationalise Northern Rock (in February 2008) he then faced a series of unprecedented events.

On 15 September 2008, Lehman Brothers filed for bankruptcy. The following month, the US Congress approved a $700bn bank bailout, three Icelandic banks collapsed and the UK government was forced to rescue the Royal Bank of Scotland, Lloyds TSB and HBOS.

Darling is generally considered to have had a good 'war'. Despite the financial turmoil, he remained a calm and reassuring presence. Previously mocked for being "dull and grey" in cabinet posts ranging from Work & Pensions to Transport, Scotland and Trade & Industry, he won plaudits at the Treasury for his ability to steer a steady course as global economic winds battered the UK.

He was resolute when he needed to be, famously refusing US Treasury Secretary Hank Paulson's proposal that Barclays should buy Lehman Brothers. And, despite McBride's best efforts, he managed to fend off Brown's attempts to oust him as chancellor and install Ed Balls.

Subsequently, of course, Labour itself has been ousted from government and Darling has stood down from the shadow cabinet. He spends much of his time now opposing Scottish independence as chairman of the 'Better Together' campaign.

But he still takes a strong interest in economic matters - at home and abroad - and will be outlining his analysis at the Institute and Faculty of Actuaries' Life conference in Edinburgh on 10-12 November. 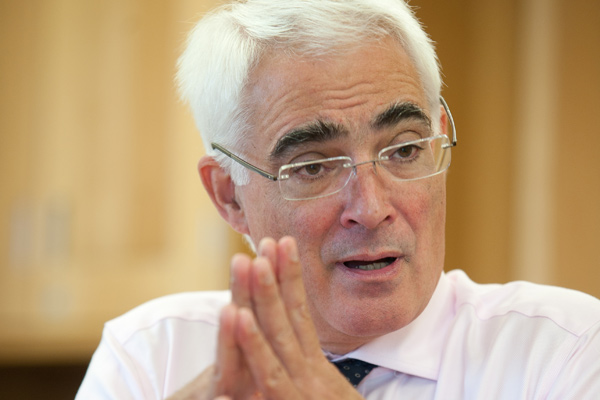 So, does the ex-chancellor think that, with the UK economy recovering, Europe retreating to the inside pages and the US out of shutdown, we can relax and look forward to the return of the good times? Unsurprisingly, the answer to this is a resounding "no".

Darling points to the high level of youth unemployment in the UK and the lack of a "feel-good factor". He also warns of the persistent "black clouds" over Europe.

"Until such time as we sort out the problems that Greece has, that Spain and Italy get over their difficulties, I don't think you will be able to say that Europe is recovering. And that is a big thing for the UK, because half of what we sell in goods and services goes there."

He suggests that UK and US banks are now better capitalised and better run, but there is less confidence about their counterparts in Europe. Darling remembers a degree of schadenfreude from European governments when RBS collapsed, but points out that Germany's Landesbanken were caught out even earlier by investing in US subprime securities.

"I think there is a genuine fear that if you get bank failures in Greece, it will feed back into some of the European banks. I also think that some of the southern European banks are very exposed to their own sovereign debt."

For the UK economic recovery, it's "too early to break out the fl ags", he suggests. Particularly worrying is chancellor George Osborne's aim to achieve a budget surplus by the end of the next parliament. Darling questions whether this is credible, given the current low level of growth, or desirable in terms of the impact on the economic and social fabric of the country. "Is it credible to say you're going to take 20% out of the police budget this parliament and next? At what point do people say 'hold on a minute, you know there's a problem here'?"

Darling thinks the surplus suggestion is a political aspiration rather than a target based on economic reality. He's equally dismissive of Help to Buy, the coalition's 'big idea' to help potential house buyers purchase a property with deposits as low as 5%, and suggests the £12bn programme is likely to cause another housing bubble.

"My worry is that if you put more cheap money into a market where there is the same number of houses, there is an inevitable result. It's elementary economics."

This has strong echoes of Northern Rock's demise, he believes. "Remember back in 1997, after Northern Rock, everybody said that this should never happen again - 'How dare people borrow money at 95% loan-to-value? This is ridiculous. We must stop it.' Here we are six years later and the government is actually sponsoring the scheme making these things possible."

Darling says he has concerns that rising house prices will encourage households to take on further debt. The Bank of England is likely to start raising interest rates from 2016 and this could be a "considerable burden" on individuals.

But if Help to Buy is simply political posturing by his successor at Number 11, then isn't Ed Miliband's proposal to freeze energy prices a similar vote-chasing ruse? 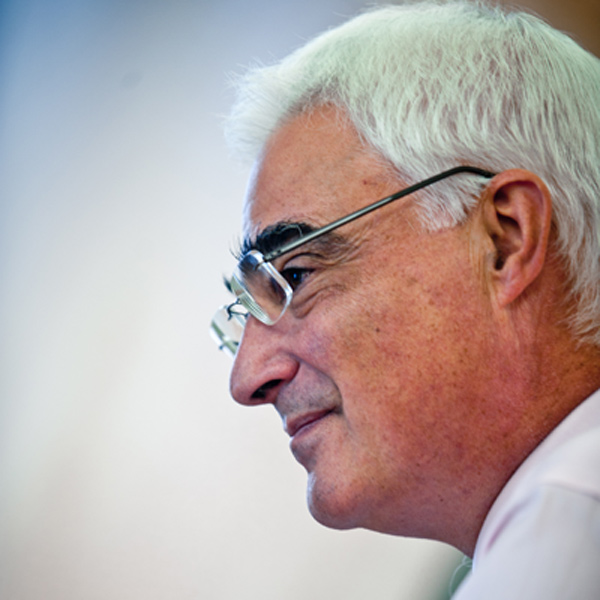 Darling, despite his previous rebellious tendencies and the freedom of the backbenches, offers a staunch defence of the Labour leader's proposal.

"I don't think it's anti-business to be saying that if the market isn't working, it's the government's duty to make it work. It's one of life's mysteries how [energy] prices only go one way."

Darling admits that his views have been coloured by the frustration of dealing with Ofgem, the energy regulator, when he was in government. He dismisses the argument that power companies need to put up prices to fund their investments - and compares the electricity market with that of the banks pre-crash.

"The investment record of the electricity companies is not great. When was the last time that a large power station was completed?" he says.

He denies that he is anti-privatisation - pointing out that Labour privatised National Air Traffic Services and considered selling off Royal Mail. More recently, the coalition has succeeded in privatising Royal Mail, although Darling claims that it has been sold "very cheaply".

"I have long believed that you need a mix of public and private. The key is to make sure that you have got a sufficiently robust regulatory regime so the public interest is looked after."

However, he does question the contracts agreed for some deals under the Private Finance Initiative, many of which were signed during Labour's term in office. There are issues with financial transparency, he says, and additional user charges, such as for car parking in hospitals.

"We need to take a long, hard look about what is genuinely on and off balance sheet. Some of these deals - especially the older ones - don't look so great at the moment. At Edinburgh Royal Infirmary, you don't want to be visiting people for too long or you'll get cleaned out in the car park."

There is one area where Darling agrees with the actions of his successor, and that is the appointment of Mark Carney as the governor of the Bank of England. Carney is the first non-British governor at Threadneedle Street, and was personally recruited by Osborne.

"Right from the time that his name was mooted, I've been a supporter of his," Darling declares. 'I used to work with him when we were in government and I was very impressed. If I had been around, I'd have been knocking on his door as well."

He welcomes Carney's use of "forward guidance" to give more confi ence as to future policy, particularly concerning interest rates. The Bank has said that rates will remain at 0.5% until the unemployment rate falls to 7% or below. There are a few conditions or "knockouts" to this promise, but it allows people to make more informed decisions.

"Forward guidance is perfectly sensible. I don't think it's any bad thing for a central bank to be saying 'If things carry on the way we think they are going to carry on, this is what you can expect'. Indeed, if you look at the long history, when people say 'What did Britain lack?', it was stability, and part of stability is knowing what the price of lending is going to be."

As well as political consensus on Carney and forward guidance, Darling says the parties should be able to reach agreement on how to respond to an ageing population. It's disappointing, he notes, that attempts to achieve this before the last election fell apart amid much acrimony.

"The real political problem is to what extent we are prepared to forego our spending now or our inheritance in order to pay for older people. It's quite simple really - you either pay for it by more taxation of the working population now or you say to people 'You're going to have to make a greater contribution yourselves'."

For someone who has been out of front-line politics for three years, Darling is a very visible presence. Aside from his high-profile role in the independence referendum, he writes regular pieces for national newspapers and is often quoted on the issues of the day, such as the High Speed 2 rail line (he's against), universal credit (he fears it will be impossible to implement) and quantitative easing (he thinks it's run its course).

Darling is usually heard with great respect on both sides of the House of Commons and, in September, he came 17th in the Daily Telegraph's list of the Top 100 Influential Left-wingers. So, once the independence referendum vote takes place next September, can we expect to see him back in the shadow cabinet?

On this issue, however, he is less than forthcoming. "In the days immediately following [the independence vote], I will decide what I am going to do, which will include whether I stand again and, if I stand again, whether I want to come back to the front bench."

This article appeared in our November 2013 issue of The Actuary.
Click here to view this issue
Filed in:
11
Also filed in:
Interviews