Longevity: Beyond the summit

The peak of increase in life expectancy may not be as close as you think. Steven Baxter and Andrew Gaches explain the possible pitfalls

For those who enjoy a country walk, or the more strenuous exertions of bagging Munros, you may have experienced the conviction that you have reached the summit of your climb, only to find that as the 'summit' nears you have been fooled and there is plenty more climbing to do.

With longevity projections this has been the story for many decades. Oeppen & Vaupel (2002) showed how demographers and actuaries alike have valiantly tried to project life expectancy, only for their projections to be proven too low, typically within a period of just five years. In each case, the projections succumbed to the same pitfall, assuming that life expectancy was close to peaking, or that the summit has been reached.

In recent times, the actuarial profession in the UK has sought to address this, introducing minimum improvements, which have morphed into 'long-term rates' in the Continuous Mortality Investigation (CMI) model. The idea behind these is to ensure that life expectancy continues to increase rather than rapidly levelling off to some maximum attainable value. However, our projections continue to include an implicit assumption that the rapid rate of increase in life expectancy seen in recent decades has peaked. 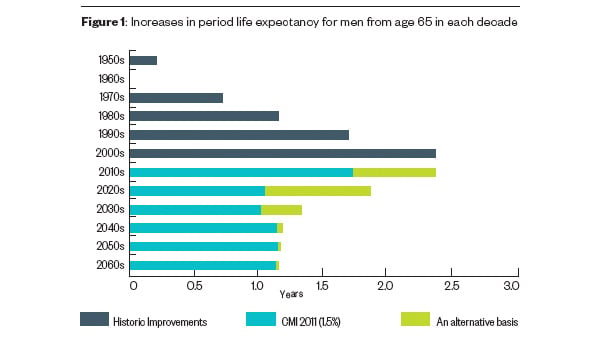 Past trend and future projection

The challenge of defending this assumption is best seen by Figure 1 (page 21). The chart shows the increase in period life expectancy of a man age 65 in each decade from the 1950s onwards.

The grey bars show historic experience observed within the Office for National Statistics (ONS) England and Wales data, which underpins the CMI projections model. With the exception of the 1960s, we see a sustained trend life expectancy increased in each decade, and by noticeably more than the preceding decade.

The blue bars in Figure 1 show the projected increases from an assumption commonly adopted for pension scheme funding and market-based pricing of longevity. This shows a rapid reversal in the trend, assuming improvements have peaked and are rapidly declining to the level of increases implied by the long-term rate (for illustration we have used a long-term rate of 1.5%, however for rates of 2% and below a very similar picture is seen).

This picture has been dubbed 'extreme trend reversal', and it is easy to see why. It assumes improvements this decade will be at a similar level to those seen in the 1990s. Within a few years it will be clear whether this assumption is being borne out in practice - if not then we are likely to have to recommend increases in longevity reserves for our clients and employers. We therefore recommend considering alternative assumptions. One possibility is the green bars in Figure 1, which allows for a more gradual run-off of improvements to the same long-term rate. For a life insurer with an inflation-linked annuity book, this would increase reserves by some 4%, while for a pension scheme with a mix of in-payment and deferred annuities, the increase in technical provisions would be closer to 6%.

How has the 'extreme trend reversal' become the default assumption? The answer lies in the core parameters embedded in the CMI projections model. The CMI model projects improvements (technically in two parts - the age-period and cohort components) from an initial starting rate to the long-term rate in line with the schematic of Figure 2. While users of the model can employ the advanced parameters to change all the parameters highlighted in Figure 2, most actuaries rely on the core version of the model where only the long-term rate for the dominant age-period component can be changed.

In the core model, the shape of the convergence to the long-term rates does not depend on the 'direction of travel' in historic improvements. Instead it assumes a pattern similar to the lower-green line in Figure 2, for example, immediately following a downward trend. When the CMI model was first released, this assumption seemed plausible.

The grey line in Figure 3 shows the smoothed period improvements observed in ONS death data when the first edition of the CMI projections model (CMI_2009) was published. Improvements appeared to have flattened off in recent years and the CMI concluded that this "illustrates possible emerging, but inconclusive, evidence of mortality improvement rates appearing to level off".

In contrast the green line in Figure 3 shows the smoothed data available two years later which led the CMI to comment that "the lower trajectory apparent from including the 2008 data has been almost fully reversed by the 2009 and 2010 data for both males and females" (Working paper 55). By this stage, the default convergence assumptions no longer look plausible. To date, the CMI has produced five variants of the lines in Figure 3, each based on an ONS dataset up to a different point in time (2007 to 2011). Four of the lines show a steep upward trajectory in the most recent years, only the one available when the CMI model was first released flattens off. 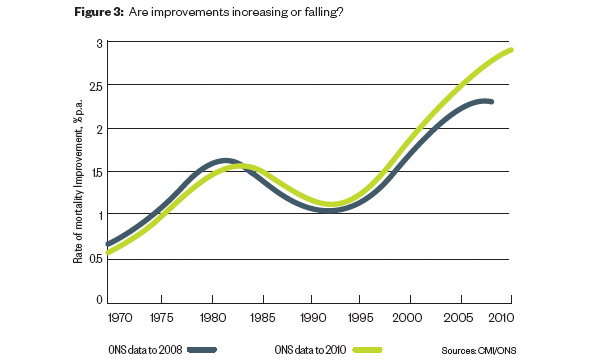 As users of the model we should challenge ourselves whether the core model continues to be appropriate for our advice. If not, then an alternative parameterisation of the model is needed. It is relatively easy to adjust the model using the advanced  parameters to obtain a run-off of improvement that continues to increase for a few years before falling away to the long-term rate.

The simplest way to do this is to increase the 'proportion of convergence remaining at the mid point' parameter to greater than 50%. As the tail-off is starting later, it would also be reasonable to assume it will take improvements longer to reach the long-term rate.

To reflect this you can increase the 'period of convergence parameter' in the CMI model. Doing this you will be able to replicate the green bars in Figure 1.

The issues raised in this article have been noted as part of the CMI's recent consultation on the future of the projections model. At  the profession's annual mortality and longevity seminar there was a split vote on whether the convergence parameter should be made part of the core model.

A half-way house whereby the core model asks the user to choose between a small number of pre-set 'peaked' and 'not-peaked' variations may be the solution.