Paul Sharma is the outgoing deputy head of the Prudential Regulation Authority. On the eve of his departure he talked to Richard Purcell and Titus Bakanauskas about the value actuaries can add, and what the newly created PRA means for UK insurers. 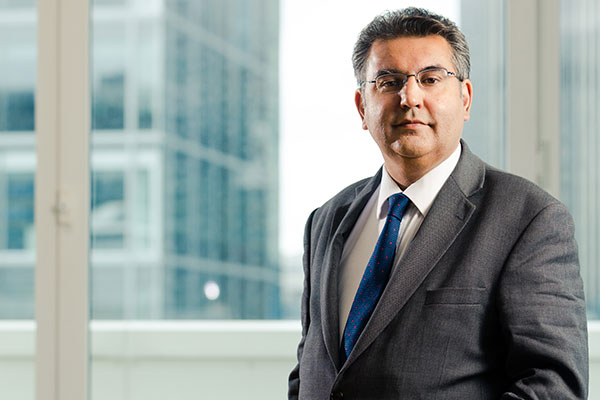 Paul Sharma recently decided to step down from his role as deputy head of the Prudential Regulation Authority and executive director of policy at the Bank of England following a career of 20 years. He firmly believes those years have presented a wide range of challenges and experiences that he can now draw upon in his new role as co-head of regulation practice with consulting firm Alvarez & Marsal. Before making his departure, he sat down with The Actuary to discuss the current regulatory climate.

Was an actuarial career always on your radar?

Having graduated with a degree from Cambridge in mathematics, I had two job offers: one to work for an accountancy firm in London; the other to train as an actuary in Norwich. A career in London suited me more, and I accepted a job as a trainee accountant at Arthur Young (now Ernst & Young).

What made you switch to the public sector?

You can specialise in insurance very early on, even as an accountant, and working for the regulator is appealing as it offers experiences you cannot get elsewhere.

What key skills or experiences would you say have helped you in progressing in your career?

Working in insurance means you have to have a strong grasp of the actuarial and legal matters. The other key skill is communication, and being able to influence. Technical specialists can bring a lot to the table, but without softer skills, people don't always listen to them.

What are the priorities for someone in your role?

It's about implementing a new way of supervising firms and learning lessons from the financial crisis to create a judgement-based regulatory framework. We are moving away from a rules-based approach, and to one that is more forward looking. We need to embed this new approach in the way firms work. Overall the objective of the PRA is to reduce the probability of firms failing, and where failure does happen, making sure that it happens in an orderly way.

What has changed now that prudential regulation is part of the Bank of England?

There are a lot of synergies from having micro and macro management of the financial sector under one roof. It means the Financial Policy Committee can better understand the impact on insurance companies when considering the overall stability of the financial system. We are also collaborating at lower levels to ensure better understanding of the consequences of regulatory intervention.

We are now also focusing on a smaller number of issues. We provide less but more meaningful guidance, and the PRA's supervisory statements form an important part of that.

Do you think we have created new risks by having the PRA separated from the FCA?

By having one regulator focused on financial strength and the other on consumer protection it means both areas are getting the attention they deserve. The FSA would have sometimes prioritised one area above another. There does need to be a strong level of cooperation between the PRA and FCA, and this is baked in by ensuring counterparts at several levels meet and work together on issues.

Mark Carney is the first non-British governor of the Bank of England in its 300-year history. Do you think we should import more experience?

One thing we have learnt from the financial crises is that 'group think' is a problem. To address this we need diversity of thought, whether that's different cultures or from different professional backgrounds. The PRA has also recognised this and is the only European prudential regulator to have staff from virtually every EU country.

Solvency II has shown the difficulties of unifying financial regulation internationally. What do you think we can realistically achieve by working with other European regulators in the near future?

Working together is of value to firms, as they know the regulatory regime they operate under is recognised overseas. Although Solvency II has been delayed, we have had a single European insurance market since 1994, and updating and improving the EU regime is important in making sure all insurers are held to the same high standards. Now we are part of the Bank of England we take into Europe the tremendous reputation and weight this carries. This should help us be more effective in working with our European counterparts.

The government has said big banks are bad for business. Should we break up large insurance companies too?

Ring-fencing has been at the centre of the plans for banks. But this was introduced into insurance in the early 20th century when the Long-Term Business Fund and General Business Funds were created. It has stood insurers in good stead. It is important to have diversity across insurance companies; we need firms that sell both single and multiple lines of business; we need proprietary companies and mutuals. By also having a proportionate and principles-based regulatory regime we can help make sure barriers to entry are not too high, and so maintain and even improve this diversity.

You were made an honorary fellow of the Institute and Faculty of Actuaries in 2008. What is your view on the role actuaries can play in protecting the stability of the financial system?

Their role is fundamental in maintaining the safety and security of the financial industry. Within the non-life market during my working life this role has been totally transformed from rarely being used by firms to now being integral, and helping bring a new level of professionalism to this market.

I think actuaries can do more to help improve the professionalism of the wider financial services sector, and can work alongside other professions in multidisciplinary teams. They can also help reduce the 'group think' problems we have had in the past. More generally, I think actuaries have a strong sense of public service, and this is important in helping to lead by example.

How do actuaries add value within the PRA?

I always found working in multi-disciplinary teams with actuaries was very important in helping me to develop my technical skills and knowledge. At the PRA, actuaries work in both specialist and multidisciplinary teams, and we use them in wider-field roles. We recently appointed an actuary to lead our work with the Financial Services Compensation Scheme in developing their rules, which is a very legal role.

What one bit of advice would you give to budding actuaries at the start of their career?

Although the communications exam might seem unimportant compared to the other technical papers, communication skills will be a key driver for success in your career.

What do you like to do when you're not at work?

I like going on holiday with my six-year-old goddaughter. History is also a passion of mine, and I like reading books in this genre. My favourite books are Decline and Fall of the Roman Empire and The Meditations of Marcus Aurelius. I would recommend anyone who works in risk to read a book about the fall of a civilisation. I also enjoyed Cromwell - the biographical film about Oliver Cromwell.

What is your favourite motto?

"I will maintain". This was the motto of William of Orange, founder of the Bank of England.

Paul Sharma will be talking at the SIAS Jubilee Lecture on Tuesday 22 October. Details will be released shortly in The Actuary magazine and via the SIAS newsletter.

This article appeared in our October 2013 issue of The Actuary.
Click here to view this issue
Filed in:
10
Also filed in:
Interviews