Nick Silver and Sarah Bennett meet the free market actuary, economist and programme director at the Institute of Economic Affairs 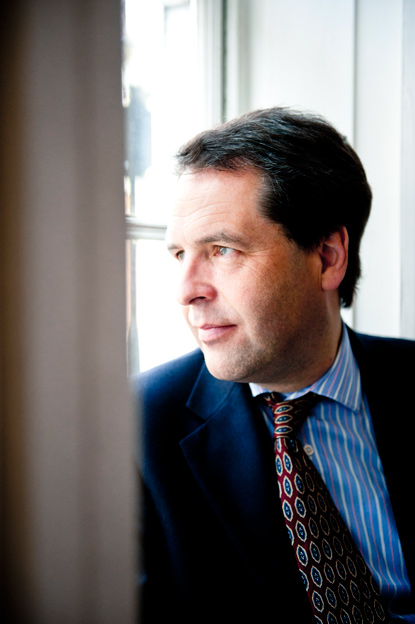 To meet professor Philip Booth you must walk past the House of Commons before entering an impressive Georgian building to climb a creaking set of stairs, watched by rather unsettling portraits of dead economists. His office is stuffed full of books, many of which he is the author of, and presided over by a poster of Friedrich Hayek, his intellectual hero.

Booth is editorial and programme director at the Institute of Economic Affairs (IEA), a post he has held for more than 10 years and which he readily describes as his dream job. The role has only become available three times in the past 50 years and Booth considers himself lucky to be the current incumbent. He also lectures part-time at Cass Business School as professor of insurance and risk management.

The IEA is a free market think tank. Its raison d'être is not to change individual pieces of legislation, but rather to change the intellectual climate. Booth explains: "It is easy to link cause and effect in the short term, however the IEA's objective is to change the climate of opinion in the long term. It is difficult to measure success; for example, did Geoffery Howe and Margaret Thatcher abolish exchange controls in October 1979 as a result of an IEA paper written in 1955? It is difficult to trace it back to forces trying to change opinion a decade or two earlier."

In the beginning Before joining the IEA, Booth studied economics at Durham University and began his actuarial career at Equity and Law. Shortly afterwards, he accepted a position as lecturer in actuarial science at City University. At the time, he was only three-tenths qualified and younger than many of his students. On one occasion the registry refused to give him the exam papers, believing him to be a student.

He was also seconded to the Bank of England for one year. At the time there was very little institutional knowledge of the non-bank financial sector and one of his jobs was to translate banking into insurance language and vice versa. He also worked on credit derivative swaps. There was a debate in the Bank of England then as to what was meant by systemic risk, an argument that has still not been resolved intellectually. Booth took a relatively narrow view - to focus on the banking system, as he believed there was an inherent danger in regulating absolutely everything as if it were a potential banking risk. Before joining the IEA he went back to Cass at City University, becoming associate dean of the business school.

Our discussion naturally moved onto the topic of the role of actuaries and the fact that actuaries have in the past shaped public policy - and were instrumental in shaping the 1870 Life Assurance Companies Act. "Actuaries should inform government policy through submissions, feed into the debate and, as legislation becomes defined, the actuarial profession should take part in the discussion and contribute," says Booth. "Given the position and role of the IEA, I regularly participate in debates and more actuaries should be getting involved in these discussions."

There are two areas in particular where Booth feels that the profession failed to speak out, with deleterious consequences. When state pension contracted-out rebates were reduced in the 1990s, actuaries should have contributed to the public debate. He states that it would have been appropriate for the profession to have pointed out that the reductions meant that fair actuarial value was no longer paid, which led to the devaluation of contracting out as a solution. He also believes that the profession should be more vociferous about public sector pensions. "It is difficult on the one hand to ride the horse of financial economics for private sector pensions accounting and on the other hand to ride the horse of complete arbitrariness for public sector pensions accounting," he says.

Understanding the weaknesses of our models is key, Booth says. When trying to ensure the long-term sustainability of a pension fund or manage the solvency of a life insurance company, he thinks there is a lot we can learn from financial economics but there is a danger, in that we think we know more than we do. The focus should be on understanding risk rather than finding a closed-form solution.

We should be wary of relying too much on complex models, he advises. This is one of the elements that led to the financial crash. Directors cannot possibly understand the assumptions behind the complex models. We should not lose sight of the fact that we need an understanding of the underlying mechanisms and risks in financial institutions. Booth pauses to look up a well-known quote from Hayek: "The curious task of economics is to demonstrate to men how little they really know about what they imagine they can design."

He continues: "There are other things that actuaries can learn from modern economics. An actuary may be required to verify that accounts for a pension fund are determined in accordance with regulations and mark to market techniques," he says. "But if an actuary understood the impact of unusually loose monetary policy on asset markets the actuary might judge that, in their view, the market values are not a 'true and fair' representation of the underlying situation. Regulation would overrule prudent judgment."

If the public does not like a valuation, Booth believes this will be taken into account in a company's share price. "Friedrich Hayek (and the IEA) believe in free markets, but the market is not free if it is controlled by legislated accounting standards." As the profession has expanded, it is more of a challenge to come up with a unified view, but Booth holds that actuaries are far too bogged down in regulatory detail as they deal with the intricacies and the detail of Solvency II, for example.

A key interest of Booth is financial regulation. The old Life Assurance Companies Act of 1870 worked pretty well, and it consisted of three main elements. First, the insurance company was required to put down a deposit. Second, it was required to publish accounting information to the market via the Board of Trade. Third, a special regime was provided for winding up insurance companies. In 100 years, there were only two failures and neither affected policyholders. There was no expectation that the state would step in to cover liabilities. "More than 140 years on we need similar rules for banks," says Booth.

The changes in insurance regulation in the 1970s and 1980s, partly due to European Union legislation, have resulted in the judgment of actuaries being replaced by the bureaucracy of the regulator. "I do not see the need for capital regulation at all," states Booth. "Financial institutions will behave prudently provided they bear the risk of their actions. Of course we will get catastrophes and there should be a safe mechanism of winding-up, but we should not have statutory capital regulation."

Regulation does more damage, as it inhibits competition and promotes complexity. "We assume problems can be regulated away but interfering can make them worse. The banking regulations made the market more complex. Even the hint of bailout changes the behaviour of providers of capital."

In Booth's opinion, the 2007 fiancial crisis was largely down to government interference, both implicit and explicit. He explains: "Detailed prescriptive regulation can crowd out the application of sound subjective judgment."

"If you look at the causes of the financial crisis it was not casino banks bringing down retail banks. The problem was the moral hazard created by the government in the 'Land of the Free'. The banking system had become a welfare state for bankers. There was explicit encouragement of bad lending in the US, Freddie Mac and Fannie Mae in the US, weak bankrupcy law in the US and the perception that loosened monetary policy would support the securities markets." The crisis has been attributed to am relaxing of regulation but there was heavy regulation elsewhere. Contributing factors included the underwriting of the housing system, loose monetary policy and economic models that underestimated the downside. 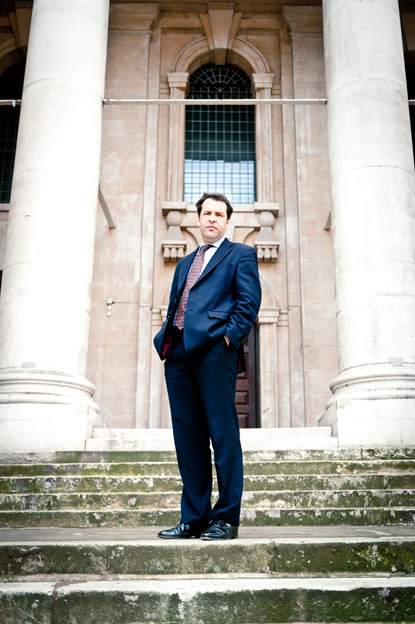 ?State planning does not work - it is only through a free market economy that we thrive.

? Planning of economic activity by government is impossible; the process of trial and error by the free market is integral to success. In the NHS and education we see the disruptive change caused by central planners and shortages of school places because government is slow to react to increased demand.

? A preference for economic life to be based on mutual cooperation within a society rather than have behaviour regulated or goods and services allocated by the state.

At first glance, this appears contradictory to Booth's religious views, (as you would think the Vatican a statist organisation), yet he seems to have had noreverse- Damascene conversion. He is a devout Catholic and has written extensively on Catholic social teaching and the market economy, and participated in two private audiences with Pope Benedict XVI. He argues that the Catholic Church is very clear on the importance of family, private property and the importance of government not interfering in education. Catholics believe in the primacy of charity rather than in state welfare, which is not to say there is no place for state welfare.

The IEA has asserted the importance of private pensions provision. Pay-as-you go (PAYG) promises have proved disastrous and, Booth believes, will undermine the financial stability of the country.

"We need to focus on the importance of private pension provision, which provides greater freedom in times of demographic uncertainty," he says. "If people want to save they can retire earlier, if not they can work longer. As it happens, there is strong evidence that working longer improves health."

If the government is going to provide subsidies, it seems sensible that it should be to private pension provision rather than unfunded state PAYG.

The state will always need to redirect income to the poor, and Booth agrees that means-testing provides adverse incentives, but he would rather have low taxes, fewer universal benefits and means-tested benefits providing a safety net. The state also currently provides insurance for insurable risks. Booth doesn't think it should be providing for these risks at all, as it replaces and ultimately demolishes the private sector and institutions based on reciprocity and principles of community and mutuality. This also leads to unsustainable outcomes; for example, the implicit PAYG liabilities for health are just as large as for pensions.

So what are his views on the National Employment Savings Trust (NEST)? "I object to auto-enrolment because it is an additional burden on employees and employers," says Booth. "For many young people paying their mortgage back is probably the best option. They can make use of NEST when older. Employers do not need additional costs. If NEST replaced government pensions, I would be comfortable. If the purpose is to provide sufficient to fl oat people off meanstested benefits, the proposed fl at-rate state pension is supposed to do this. Auto-enrolment is a further imposition."

It must be difficult to hold views that are as contrarian to mainstream debate as professor Booth's are. But the only area where he has had a significant amount of adverse mail is around pensions reform and cuts for older people. Although his views are controversial, they are hard to argue with when faced by the full force of his intellect.

This article appeared in our September 2013 issue of The Actuary.
Click here to view this issue
Filed in
09
Also filed in
Interviews