Health: Back to the future

During the past few years, it has been hard to read a newspaper without being told not only about the ageing population but the impact this will have on the UK's health and social care structure. So what is the issue facing the country and what is government doing about it?

The UK and other major economies, including Germany, Japan and the US, are experiencing rapidly ageing populations. Currently, 17% of the UK population is over 65 and this is projected by Laing & Buisson to increase to 22% by 2030.

The existing social care system is based on a range of different statutes, making it complex and difficult to understand. Planned new legislation has been designed to simplify the system and proposes a new financial model to build a more sustainable system of adult social care in England. Other key benefits are expected to be greater public awareness and understanding of social care costs as well as a much improved process for giving information and advice.

One in five men and one in three of women over 65 will need residential care during their lifetime. However, there is widespread misunderstanding of the level of state support provided, possibly because the NHS is seen mistakenly as a safety net and possibly because of an element of denial.

Indeed, 37% of people think the state will pay for care and 35% think they can meet these costs out of their pension income. Average weekly care home fees in England are £750 for nursing care and £532 for residential care. There is a wide variation in fees geographically, so with the mean pension income in the UK2 sitting at £265 per week, this is not likely to be an option for many.

There have been various changes to social care provision over the past 10 or so years, culminating in the Care Bill now before Parliament. But the process really got started in June 2010, when the government appointed economist Andrew Dilnot to chair the Commission on Funding of Care and Support.

At the same time, the Law Commission was working on its own final proposals for adult social care reform, which it published in May 2011. The Dilnot Commission then published its Fairer Care Funding report in June 2011. Its key recommendations included a lifetime cap on care costs, an increase in the means-tested threshold and the extension of the deferred payment offer. Having reviewed these findings, the government published a white paper on social reform alongside a draft bill and a progress report on funding in July 2012. In February 2013, the Department of Health published a policy statement on care and support funding before the first reading of the Care Bill took place in May 2013. The following month, the government proposed that state-funded care support would generally only be available to those assessed as having 'substantial' care needs.

The bill is currently progressing through Parliament and it is expected to become law in April 2014. It is expected that the universal deferred payment scheme (UDPS) will be introduced in April 2015 and the £72,000 cap and extended means test in April 2016.

So, who will pay for care? What do the care cap and the UDPS mean in practice? How much a person might have to pay depends upon several factors, including the level of care required, the type of care, the cap and a means test. Only care costs incurred once a person is deemed to have a care need above the national minimum eligibility criteria (NMEC) are described as 'eligible' and will count towards the cap. In addition, only the amount that the local authority (LA) would normally pay for care will accrue towards the cap. An individual will be expected to pay £12,000 pa towards general living expenses if in residential care. These costs will continue even when the capped level has been reached.

On top of this, means testing applies, so any person with assets lower than the upper limit (£118,000) will start to receive state support even before the £72,000 cap is hit. For every £250 of assets above the lower limit (£17,500), a contribution of £1 per week is required. A metering system will be introduced for accumulating the amounts contributing to a person's cap.

Figure 1 shows the cap in practice - how it affects an individual from the point when metering starts. The key assumptions are that:

? no allowance for fee or cap inflation or investment returns.

This shows that a typical person would need to spend £127,000 on care costs (including hotel costs or general living expenses) over a 4.5-year period (average stay in care is less than four years ) before the cap would apply and then continue to pay hotel costs (£231 per week). If the care-home fee exceeded the LA rate, the individual would also need to pay the excess. Figure 2 is based on the same assumptions as Figure 1, but allows for the impact of means testing. It shows how the funding system proposed in the Care Bill leads to a more equitable system, with the maximum asset depletion at just over 50% rather than just over 80%. 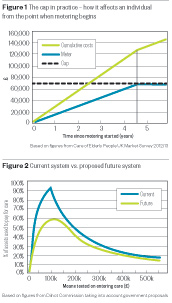 The UDPS will be launched in April 2015. It will allow people who meet yet-to-be-determined criteria to use the value of their home to pay for care without the need to sell the property.

Details are yet to emerge of how, and if, the means testing regime will change other than for the lower and upper limits - for example, how will property assets be treated? Will assets be included in the means testing irrespective of who is living there? Currently, they are excluded while a partner/spouse or dependent child is resident. Does the introduction of UDPS change this?

Both these features raise the question of administrative complexity. How often will assets be assessed? What happens if someone moves? How are shared assets treated?

There are several groups within the IFoA actively looking at social care funding changes. The Pensions and Long-Term Care Working Party, which was formed in May, and associated research groups work with the Department of Health and the Association of British Insurers (ABI) on their review of current or potential products that could be offered to support consumer needs under the new regime.

One of the research groups presented its initial findings on potential products to the DH/ABI Pensions and Insurance Working Group on 5 June. A holistic view of products to support consumer needs is being taken, as it is clear that no one particular product is optimal for all individuals. Initial thoughts have been that a pre-funded protection product is unlikely to be successful. People don't generally save enough for retirement, so convincing them to set aside money in case they need care is unlikely to work. A key feature of any future product will be flexibility. The intention is that the working party will produce a report for publication later in the year.

A full range of products is being considered, including accelerated drawdown, equity release and lump-sum protection products similar to those related to critical illness as well as various types of annuities.

To assist with product design, research has already been completed on funding models from around the world - see the October 2012 report from the Long Term Care Working Party, 'Long-Term Care - A Review Of Global Funding Models' by S Elliott et al.

While the information available suggests that the draft Care Bill will go a long way to rationalising this market, much still needs to be clarified, including how people will navigate a still relatively complex system.

While the new regime has introduced opportunities for product innovation, more changes are needed. For example, the Government Actuary's Department limits for capped drawdown should, we think, vary according to health and there should be a level playing field for means testing.

1 Please note, this article uses the data and legislation as it applies in England. Similar issues affect the other countries of the UK.

2 UK figure is used for illustration as England figures unavailable.

This article appeared in our August 2013 issue of The Actuary.
Click here to view this issue
Filed in
08
Topics
Health care