Andrew Slater considers the case for investment in Africa 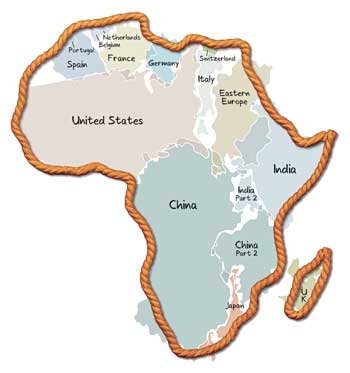 I blame Bob Geldof: Monday mornings, silly names for children, unruly hair... but what I blame him for in particular is the enduring image of Africa, courtesy of Live Aid in 1985. While the image sticks in the mind, the reality has moved on tremendously.

In fact, Ethiopia is, after Nigeria, the second most populous country in Africa with over 80 million people. The population of Africa recently reached one billion people and is forecast to double by 2050. But that's OK, because there is lots of space, as the map graphic (far right) from FlowingData.com, The True Size of Africa, illustrates.

In 2013, Africa is the place where everyone wants to be seen: David Attenborough and team capturing the most magnificent wildlife scenes; and the Top Gear crew larking around and driving on better roads than we get back home in the UK.

So why all the interest in Africa? Two reasons. The first I cannot articulate any better than the International Monetary Fund did in May in its Regional Economic Outlook survey entitled Sub-Saharan Africa: Building Momentum in a Multi-speed World: 'Growth remained strong in the region in 2012, with regional GDP rates increasing in most countries (excluding Nigeria and South Africa). Projections point to a moderate, broad-based acceleration in growth to around 5.5 per cent in 2013/14, reflecting a gradually strengthening global economy and robust domestic demand. Investment in export-oriented sectors remains an important economic driver, and an agriculture rebound in drought-affected areas will also help growth. Uncertainties in the global economy are the main risk to the region's outlook, but plausible adverse shocks would likely not have a large effect on the region's overall performance.'

Figure 1 shows real GDP growth for various regions. Africa is ahead of central/eastern Europe and Latin America, and catching up with Asia. Figure 2 shows that, at the same time, inflation is under control. Emerging market investments also provide some much-needed diversification within investment portfolios as they are less correlated with developed market investments. 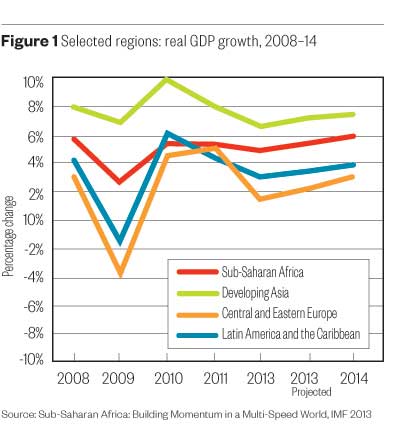 If you were comfortable that the UK environment would deliver 5.5% real GDP growth and that (against a background of quantitative easing) inflation is under control, then please turn the page to the next article. If not, and you observe zero yields on fixed income and the gyrations of developed market equity at the whim of politicians, then read on.

The second reason for the interest in Africa is closer to home. With the new statutory objective for the Pension Regulator to support scheme funding arrangements that are compatible with sustainable growth for the sponsoring employer, we finally have a level playing field where we can have a sensible discussion about investment strategy.

It is no longer an attitude of 'if you have the cash then you have to pay the cash', regardless of other uses for that cash. That was always a rather blinkered view of pension scheme financing, analogous to spending money on the seatbelts of a car at the expense of the brakes. That is not to say seatbelts are redundant in a car - they clearly are not - but it is a question of emphasis and balance. It is the same with a pension scheme's investment strategy: there is need for balance between risk-minimising and return-seeking elements to the total portfolio.

Given that the environment is now conducive to sensible investment deliberation, how might a small allocation to Africa, say 1% to 2%, affect a pension scheme? Such an allocation will not increase total portfolio risk because of diversification. Based on Figure 3, a 2% diversified allocation across Africa would have shown as an extra 1% on the funding level over 2012.

I am not going to try to argue that investing in Africa is risk-free. Of course, there are risks, but risk levels are on the way down, and the risks take the form of 'known unknowns' - something that cannot be said about developed markets, where, thanks to the politicians and central banks, we are in an environment of 'unknown unknowns' and where risk levels are arguably increasing. 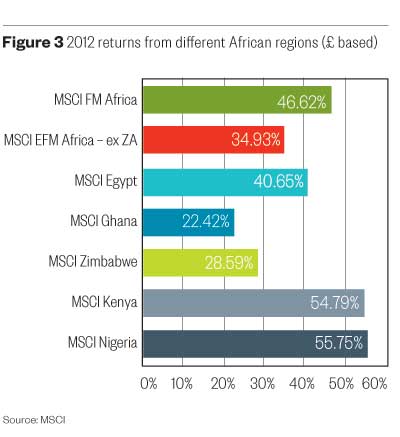 The key thing is that the risks of investing in Africa are expected to be handsomely rewarded, because the perception of risk by those looking in from the outside is greater than the actuality of risk. One common measure of the price of an investment is the ratio of enterprise value (EV) to the earnings before interest, taxes, depreciation and amortisation (EBITDA) operating profit. Figure 4 shows the EV/EBITDA ratio has had a weak recovery in Africa following 2008 and is still well below the 10-year average of 2008, while other regions have significantly recovered.

So Africa is presenting cheap valuations and high GDP growth. How did we get to this position today? For me, the story of Africa's renaissance started in the 1970s in China, when Deng Xiaoping, former leader of the Communist Party of China, said: It doesn't matter whether a cat is black or white, as long as it catches mice. That change in attitude laid the seeds for the growth throughout China over the past decade. In turn, this has led to China's involvement in Africa, including seeking commodities and building roads and infrastructure.

But the Africa story is much more than China. Africa is moving away from the loony politics of yesteryear and replacing it with democratic governments who behave in the fashion of a developed country. Africa is leapfrogging the West in one crucial area: technology. Kenya, with part-financing by Vodafone, has pioneered M-Pesa or mobile money. This mobile-phone-based money transfer system is the most developed mobile payment system in the world.

Thanks to these factors coming together, there is a growing 'middle class' in Africa that is increasingly urban and has money left over each month for discretionary expenditure. This is the fundamental driver of Africa and explains why returns have been - and will continue to be - phenomenal. Access to this growth is through the supply of old-fashioned equity capital for earnings growth and will take the form of both listed and private equity. But investors need to be aware of the unique conditions and terms of emerging market investment compared with those for developed markets.

So here's an investment idea for you. Let's suppose you find a life company that has had to turn away new customers because it has reached the maximum new business capital strain. Its domestic market is an emerging market for life insurance products, both risk and savings, of approximately 40 million people, a number which quadruples when you include the neighbouring region. Would you supply capital to facilitate that insurer's growth? As Bob Geldof would (almost) say, show us the money! 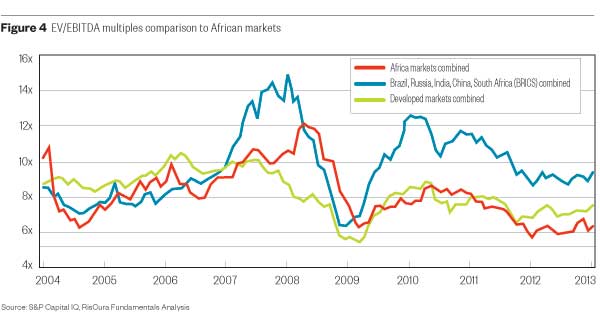 This article appeared in our June 2013 issue of The Actuary.
Click here to view this issue
Filed in
06
Topics
Investment