On the eve of the Ashes, Cameron Heath and Joe Ryan issue a challenge that may leave you stumped  or could just win you an iPad mini 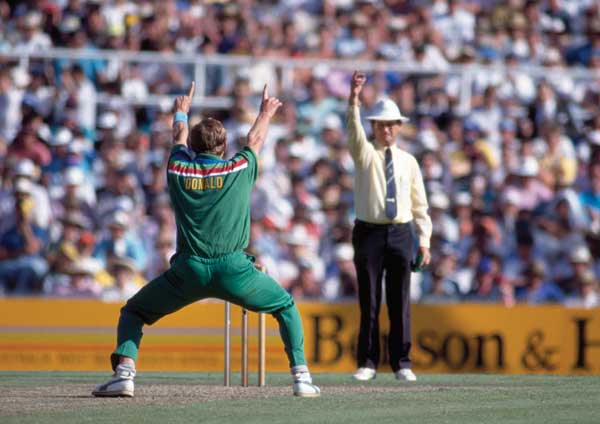 Following our successful football predictions article featured on The Actuary website in March 2013, in which we successfully used a stochastic model to predict the top six teams in the championship at the end of the season, we turned our attention to cricket. This time, we needed a different approach to meet a different challenge - trying to forecast the total runs scored by both teams combined, rather than how one team performs relative to another.

Our solution was to build a rating factor model akin to that used in motor pricing, where 'claims' were runs and 'exposure' was days of play. With all sorts of rating factors and trends to analyse, and even a (negative) 'cat' loading, in the form of the British weather, we started by looking for historical data, and - just as with motor claims - there's lots of it.

The average runs per test for all test matches since 1900 is 991, but you may not want to guess 2,973 (991 in each of three matches), as over time this figure has been increasing. There are a number of possible reasons for this.

As you might expect, we started by looking at exposure - the length of Test matches. Test matches are scheduled over five days, but this was not always the case. They used to be scheduled over three days, four days or were unlimited or 'timeless'. The last and most famous 'timeless Test' was in 1939 between South Africa and England - 1,981 runs were scored over nine days of play before the match was abandoned so that the England team could catch their boat back from Durban. The first five-day Test match in England was played in 1948, and now all Test matches are five days, with approximately six hours of play per day.

Aside from the increasing 'exposure', other factors that may have caused the increasing run trend include batsmen scoring runs more quickly - possibly influenced by one-day and T20 cricket - as well as flatter pitches that are covered overnight and when it rains to help them maintain an even bounce of the ball, plus heavier bats. In determining 'rating factors', we considered the ground where the Test is being played, the teams involved and whether they are playing home or away, the players and even the date of the match. These explain much of the 'claims' variance in the diagram, much like age of driver, driving history, postcode, and model of car are used for rating a motor policy.

Australia scores more runs than national teams on average, and England scores at about average, so overall we would expect there to be more runs between these sides than the average Test match. But this summer's Ashes will be played in England, where we generally see lower run totals than other countries. Also, different grounds lend themselves to higher or lower scoring matches - Old Trafford has a lower total average, The Oval is known to be good for batting and hence has a higher average, and we have too little data for Chester-le-Street, given there have only been four test matches there. As a proxy, we could look at the average runs scored in all first class cricket at Chester-le-Street and see how it compares to first class cricket at other grounds.

A crucial factor in determining the number of runs is the ability of the players in the current team - we can't rely too heavily on historic data. Australia's once dominant position in world cricket is less evident today. At the time of writing, England have five players in the top 20 of the ICC Test Championship Batting Rankings compared with one for Australia, and four bowlers in the top 20 versus Australia's three.

We also noted the date of the matches as a potential rating factor. There are essentially two reasons for this - the weather and the state of the pitches. Britain's great obsession is implicitly allowed for in past data, but that does assume the weather over these 15 days will be as it has been over the past century. Take note, there have been four test matches that were total washouts, where fewer than 50 runs were scored in total. You might want to fire up your cat model to help here. As for the pitches, they are rarely used the season before the Test these days, but if they are, they may wear faster, making it more difficult to bat. In addition, pitches tend to dry out over summer, so will be harder, flatter and faster in August and September than in May.

There are a host of other factors that could influence the total number of runs, which you may want to consider. It is also important to note the overlap between factors and to avoid double-counting. 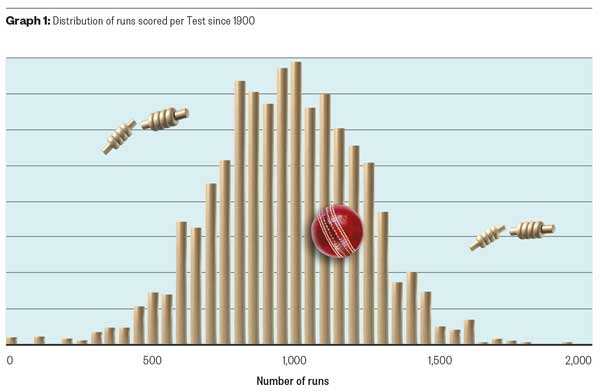 Modern technology is playing a big role in insurance markets, with the use of telematics becoming increasingly important for motor insurance. Does modern technology - through improved training and the ability to scrutinise technique through watching television replays - affect the number of runs scored? Does the fact that players are playing more Test matches increase the number of runs, or does fatigue come into it? Likewise, covers and better drainage have meant that pitches are generally in better condition than in the past. Do better salaries and sponsorship deals motivate players to score more runs?

Just like changes in regulation impact insurance pricing, there have been many rule changes over the years that you may want to factor in. For example the 'no ball' rule was changed in 1963 - in the 1962/63 Ashes series there were only five no balls, three years later there were 25. In 1931 the stumps were made higher and wider, and more recently we've seen the introduction of the Decision Review System.

It's up to you how you make your prediction - detailed model or simply a guess - and just like pricing, the science is there to help; the key is getting the answer right. That said, we're actuaries and we'd love you to tell us how you went about it, so there's an optional space on the competition form if you'd like to do so.


Cameron Heath and Joe Ryan are both members of the Insurance Actuarial Practice at Barnett Waddingham.

Win an iPad
With the Ashes starting in a few days, we are applying our actuarial skills to cricket and giving you the chance to win an iPad mini by doing the same. We want you to tell us how many runs you think will be scored by England and Australia combined in the third, fourth and fifth tests in total. An iPad mini will be presented to the person who is closest to the actual total. Full terms and conditions can be found at www.barnett-waddingham.co.uk/insurance/ashes-competition/

This article appeared in our June 2013 issue of The Actuary.
Click here to view this issue
Filed in
06
Topics
Modelling/software