Stephen J Richards outlines how a long-term longevity liability might change over the course of a year - a key consideration under the new Solvency II regime. 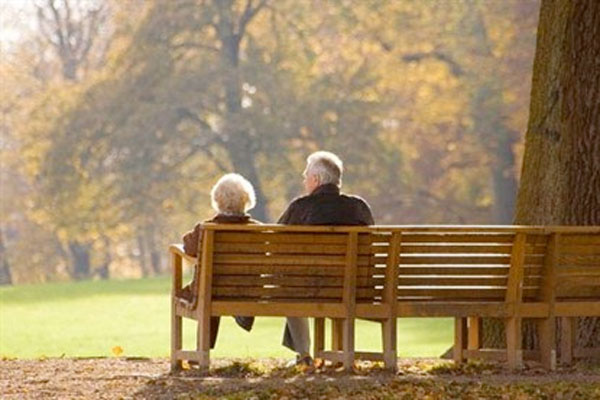 "Whereas a catastrophe can occur in an instant, longevity risk takes decades to unfold"

Longevity risk faced by annuity portfolios is typically long-term, i.e. the risk is of an adverse trend which unfolds over a long period.  However, the pending Solvency II regime for insurers in the European Union is framed in terms of how much expectations of future longevity might change over a single year, and what a one-year change in expectation might do to reserves.  The equivalent risk-management questions are "what could happen over the coming year to change the best-estimate projection?" and "by how much could a reserve change based on new information?".  This article describes a general framework for determining how a long-term longevity liability might change over the course of one year.

At a high level we fit a stochastic projection model and use its sample-path simulations to generate mortality experience for the following year.  We then use this simulated extra data to update the model to see (i) how the central projection is affected, and (ii) how this affects the best-estimate reserve.  This is repeated many times to generate a probability distribution of how the reserves change over a one-year time horizon.  The algorithm is described in greater detail in Richards, Currie & Ritchie (2012).

Figure 1 shows the updated central mortality projections from the first few instances of performing the repeated simulation and re-fitting process using a Lee-Carter model.  In this article we illustrate using the all-cause mortality data provided by the Office for National Statistics (ONS) for England & Wales for the calendar years 1961-2010 inclusive.  This particular data set has death counts and estimated exposures at individual ages up to age 104.  We work here with the age range 50-104, which is most relevant for annuities. 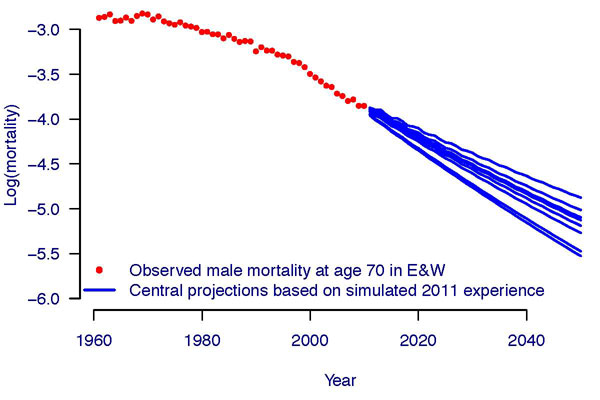 Experience data for 2011 are simulated using sample paths from an ARIMA(3, 1, 3) process and the Lee-Carter model is refitted each time the 2011 data are simulated. The changes in central projections give an idea of how the best estimate could change over the course of a year based on new data."

With each revised mortality projection we can calculate a specimen annuity factor, or even a reserve for an entire portfolio.  In our example here we only have data to age 104, so we calculate temporary annuities to age 105 to avoid artefacts from arbitrary extrapolation to higher ages.

After following the procedure we have a set, S , of expected annuity values based on projections differing only by the addition of a single year's data.  This set can then be used to set a capital requirement to cover potential changes in expectation of longevity trend risk over one year.  For example, a one-year 99.5% value-at-risk estimate of trend-risk capital would be:

where the resulting percentage is the one-year relative capital requirement in respect of trend risk only.

To estimate the capital requirement for a one-year view of longevity trend risk, we require the appropriate percentile or quantile of  , our set of realised annuity values.  The sample quantile is simple, but it is based on the top few order statistics and is itself a random variable with uncertainty surrounding its estimated value.  We use the estimator from Harrell & Davis (1982) to estimate the quantile together with a measure of its uncertainty.  Figure 2 illustrates the Harrell-Davis estimate of the value-at-risk annuity capital requirement at each age, together with a confidence envelope around those estimates. 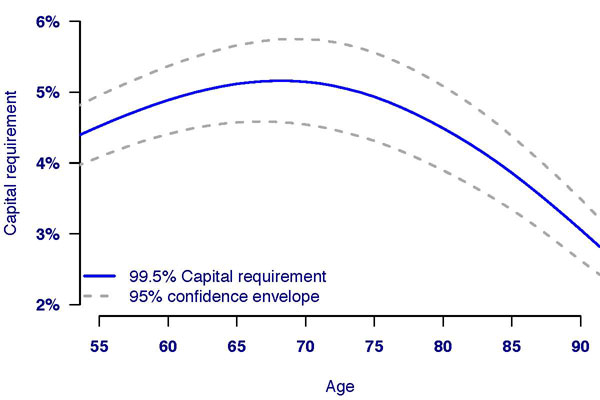 The results in Figure 2 are based on 1,000 simulations  alternative approaches include increasing the number of simulations, or else exploiting a distributional assumption about the capital requirements.  However, at least as important as anything else is the need to calculate the capital requirements in Figure 2 using a variety of different models.
Model choice and model risk

Cairns (2011) warns of the risks in relying on a single model by posing the oft-overlooked questions "what if the parameters [...] have been miscalibrated?" and "what if the model itself is wrong?".  Cairns (2011) further wrote that any solution "should be applicable to a wide range of stochastic mortality models".  Since different models give different projections, it is important to be able to run value-at-risk calculations with different models.  A crucial aspect of the framework outlined here is that it leaves the choice of model up to the user.

We have illustrated here with the smoothed Lee-Carter model in Figure 2, but most mainstream statistical projection models are potentially suitable.  Candidate models include the whole Lee-Carter family, the Cairns-Blake-Dowd model, the Age-Period-Cohort model and 2D P-spline models.  This is by no means an exhaustive list, and many other models could be used.  Most published regression-type models are potentially suitable, i.e. where no subjective intervention is required for calibration and where the model is capable of generating sample-path realisations.

However, models based around deterministic scenarios are unsuitable for this framework.  For example, the CMI's 2009-2011 models cannot be used here because they are deterministic targeting models which do not generate sample paths.  Similarly, models which have parameters which are subjectively set are also unsuitable; such models require manual intervention and cannot practically be fitted hundreds of times.  A particular point to note is that models with in-built limits on the total possible reduction in mortality would be wholly unsuitable for value-at-risk calculations.  When modelling tail risk, it is self-defeating to use a model which starts by limiting the tail in question!

There are a number of components to longevity risk, of which trend risk is one important part.  Despite the long-term nature of longevity risk, insurers often need to look at longevity trend uncertainty through a one-year, value-at-risk prism.  Examples include the one-year horizon demanded by the ICA regime in the United Kingdom, and the pending Solvency II regime for the whole European Union.  This article describes a framework for putting a long-term longevity trend risk into a one-year view for setting capital requirements.  The framework is general and allows a wide choice of stochastic projection models, thus allowing users to explore the impact of model risk.

Stephen J Richards is the managing director of Longevitas

This article appeared in our June 2013 issue of The Actuary.
Click here to view this issue
Filed in
06
Topics
Risk & ERM