Keeping the lights on

With ever-growing demand and the push for green energy, Tom Porter assesses the risks and opportunities within the UK electricity market 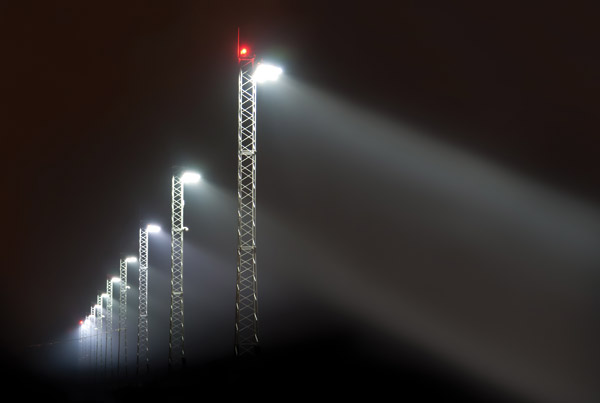 Barely a week goes by without the appearance of front-page headlines highlighting the relentless rise in electricity bills, or the latest protests at the plans for wind farms or nuclear power stations.

The UK electricity market is going through a period of significant change. Environmental challenges require us to move away from the use of fossil fuels, which have been our primary source of energy for the past 100 years. By 2020, the UK has a target to meet 30% of its power generation from renewable sources. In 2011, the proportion of our power from such sources was just 10%.

During the next decade we expect to lose around a quarter of our existing generation capacity as old or polluting power stations close, thus threatening our ability to keep the lights on. To meet these challenges it has been estimated that £110bn of new investment is needed by the end of the decade. This is more than double the current rate of investment.

Many of these risks are changing. For example, long-term demand for electricity has, to date, been driven mainly by economic growth. In the future, it will also be driven by the development of new technologies such as electric cars. The effect of this could be huge and demand for electricity could double by 2050.

This poses a real challenge for investors looking to understand and manage risks over a long time horizon, which for many new investments could be more than 50 years. The market now needs new ways to model and analyse the uncertainties ahead.

Understanding these risks is an issue not only for investors but also for government, regulators and network operators. The draft energy bill published in November 2012 announced a range of government policy measures designed to attract investors and reduce their risks in an attempt to bring forward the £110bn of investment required in a green and affordable way. 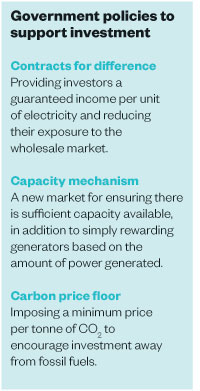 Although analysing the risks in the energy market has not generally been carried out within the actuarial domain, the type of problem is not an unfamiliar one. Long-term financial investment that is subject to a wide range of risks poses a dilemma that actuaries are well placed to answer. There may also be opportunities closer to our traditional areas. The mechanisms used to raise the £110bn needed are likely to lead to the creation of new financial instruments.

The planned 'contracts for difference' - which offer stable, inflation-linked and long-term cash flows - may be packaged into an investment that is attractive to pension schemes and insurers.

Investors will also be looking to pass on or pool some of the risks they face, giving issuers the opportunity to develop innovative solutions.

A recent study by Lane Clark & Peacock collaborated with the system operator (National Grid), the government (Department of Energy and Climate Change - DECC), the regulator (the Office of Gas and Electricity Markets - Ofgem) and academic institutions to investigate the increasing likelihood of power shortages in the UK during the next few years.

Historically, the standard measure of system security has been the 'de-rated capacity margin', which is the expected percentage of spare power capacity available at peak winter demand. Figure 1 shows the Ofgem modelling results from 2012, highlighting a sharp reduction in available margins by 2015/16.

This deterministic metric of system security works reasonably well when there are a large number of independent power plants whose behaviour is independent of one another in the statistical sense.

However, generators of wind power, as well as other sources of power that are driven by weather, have correlated output. Understanding the correlations between energy generators is therefore becoming increasingly important, and this requires a statistical approach.

There are three main risks that contribute to the possibility of supply shortage in the short term:

While the first two factors are reasonably well understood based on historical experience, wind generation is much more challenging to understand and model. Wind farms in operation in the UK currently produce around 8 gigawatts (GW), compared to the system-wide total of 70-80GW. But projections from the 'Gone Green' scenario in the National Grid's UK Future Energy Scenarios document (http://ngrid.com/1816mCd) indicate that by 2030 this could rise to as much as 47GW.

The new wind farms will be located in areas where there is currently little or no experience or data, such as far out into the North Sea or the Thames Estuary.

The only way to understand the potential generation of these future wind farms, and how this will be correlated with the output of other generators, is therefore through the modelling of wind itself. Fortunately this is made possible through Nasa's Merra dataset, which contains spatial data on wind speed and direction for every single hour since 1979. In principle, this dataset can be used to construct the distribution of wind generation for any theoretical future fleet of wind farms. 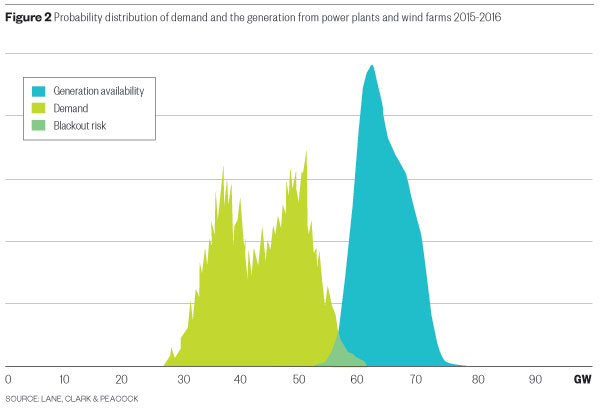 The results from this analysis will be used to inform government decisions on the amount of capacity we need to ensure a secure electricity system, and thus the operation of the 'capacity mechanism' policy instrument.

This is just one example of the growing need for statistical analysis of uncertainty within the energy markets - which actuaries are well placed to support.

This article appeared in our June 2013 issue of The Actuary.
Click here to view this issue
Filed in:
06