Despite bitterly cold temperatures, the sun emerged briefly on 28th February for the unveiling of the Staple Inn sundial, commissioned and presented by the Staple Inn Actuarial Society (SIAS) to Philip Scott, president of the Institute and Faculty of Actuaries, to celebrate 100 years since SIAS was established. 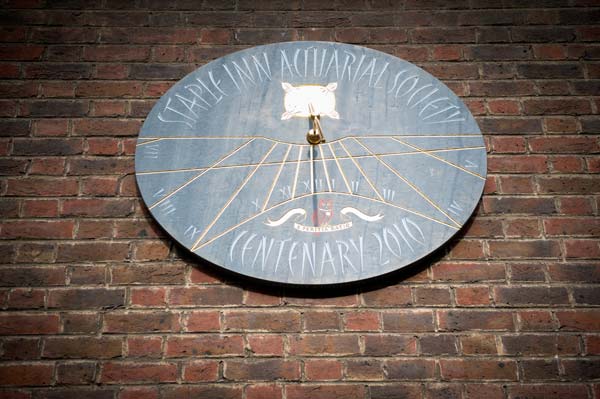 Previously known as the Institute of Actuaries Students' Society, its main purpose was originally to support students in their journey towards becoming a fellow, as there was no official study programme in place at the time. SIAS would organise talks, specifically with the aim of helping students to learn and practice public speaking skills.

Over the years SIAS has developed a vibrant social element which continues to this day, culminating in an annual ball. This event goes from strength to strength, attracting in excess of 700 attendees each year.

Following the creation of a more formal study programme by the profession, SIAS refocused its efforts and alongside hosting more social events, established a members' magazine, known today as The Actuary. It also wanted to reflect a broader membership rather than just its student base, so therefore took the name of Staple Inn Hall - given the majority of meetings are held there.

Marking the passage of time

When SIAS celebrates a major anniversary, it marks the occasion by making a gift to the Profession in recognition of the support received over many years. At the 75th anniversary, a stained glass window was installed at Staple Inn. So, to mark the centenary, a sundial was commissioned and built by the Cardoso Kindersley Workshop who were invited to attend the unveiling event as guests. Also in attendance at the presentation and unveiling was Frank King, the chair of the British Sundial Society. 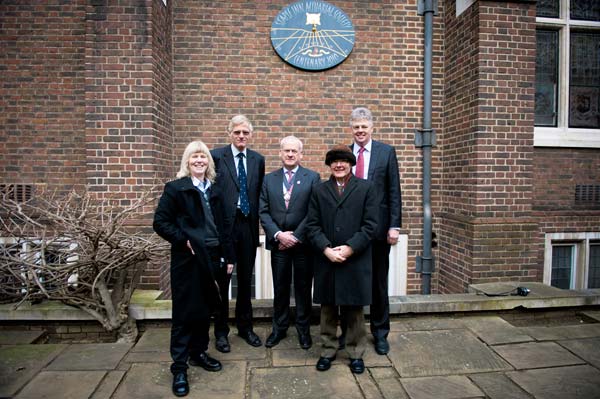 Peter Tompkins, consulting actuary and chairman of the editorial advisory committee provided a detailed presentation of the workings of the sundial.

The sundial design reveals an owl - symbolising the importance of wisdom, along with small staples of wool, after which Staple Inn takes its name.

The lines which radiate downwards from the woolsack are the hour lines. The shadow of the gnomon (the rod which stands out from the dial) and its nodus (the little golden ball) falls on those lines at the relevant hour, in theory from eight o'clock in the morning on the left to five o'clock in the afternoon on the right. You can approximate the time in between by interpolation between the lines. 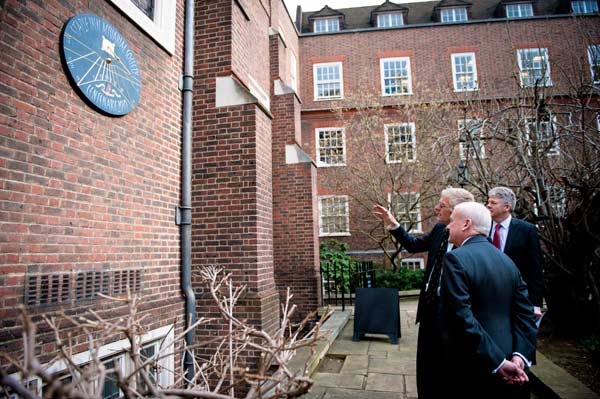 The lines running from left to right are the lines followed by the nodus at the summer solstice (bottom), the equinoxes (the straight line in the middle) and the winter solstice (top). The winter solstice curve is extended by a straight horizon line which shows where the shadow is in theory when the sun rises and sets.

The gnomon is parallel to the axis of the Earth, so it points directly to the celestial poles (for instance the north star). This means that the direction of the shadow of the gnomon at a given time of day is independent of the time of year.

The sundial tells the local sun time - for instance at noon the sun is always due south and at this time the gnomon will always cast a shadow along the 12 o'clock line on the sundial. As we are quite close to Greenwich, we only need to make half a minute of adjustment to Greenwich time here at Holborn. 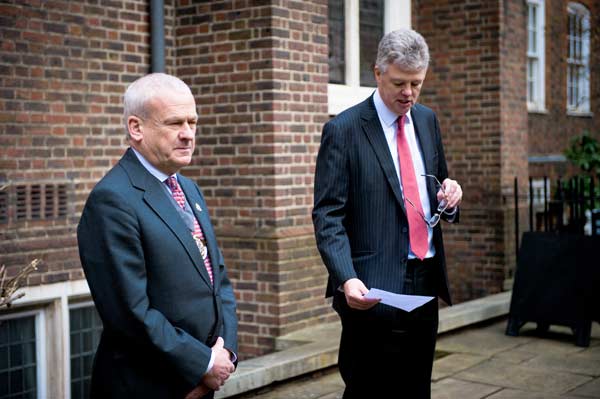 However, the motion of the sun across the sky is not even throughout the year because we travel round the sun in an ellipse not a circle. So the length of the day varies through the year, sometimes by as much as 30 seconds different from 24 hours. Our watches and clocks, however, are set to go at the same speed every day, which we know as Mean Time and this results in differences between what our watches say and what the sundial time is of as much as quarter of an hour. The difference is about 13 minutes on 28 February 2013, which means that the sundial will be set at noon when our watches show 12:13. As it happens, clocks and sundials match here on around April 17, June 10, September 2 and December 24. Fortunately, between late March and mid-September, the difference is no more than about 6 minutes which is good enough for most uses.

On presenting the sundial, SIAS chairman Martin Pike commented: "It also recognises time as something that's important to actuaries. We help our clients deal with liabilities that become payable many years in the future."

This article appeared in our April 2013 issue of The Actuary.
Click here to view this issue
Filed in
04