Living in the moment

Anyone approaching retirement age should be planning their future. But can pension schemes get better results by focusing on the present, ask Celene Lee and William Zimmern 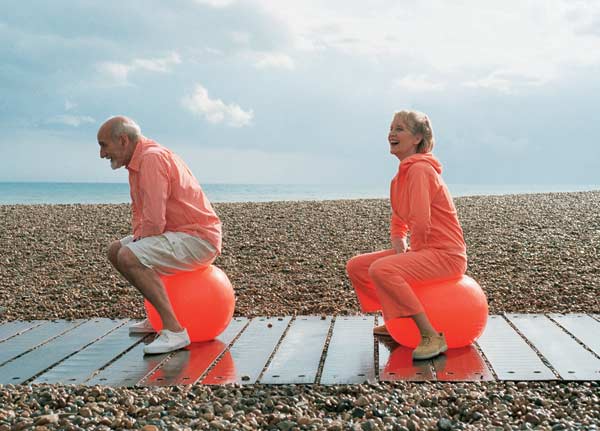 In the past decade, many defined benefit pension schemes have been pondering 'journey planning' and 'de-risking flight paths' as they plan for a long-term end game, often based on a buy-out or self-sufficiency. The time frame could stretch out to 20 years-plus.

However, while people may well be living longer, we are most certainly not staying in our jobs for as long as our parents. The average tenure of a FTSE 100 chief financial officer (CFO) in the UK is around five years [1] and for a chief executive is 4.9 years [2]. Even member-nominated pension scheme trustees often have a defined term of office of not more than five years without re-election.

Given that the key decision-makers in pension schemes have a term of office of around five years, why do we insist on talking about a strategy stretching over 20 years?

Is there a different angle from which we can look at this to better align the interests of these decision-makers with a successful outcome for the pension scheme?

If you were taking charge of a company as a CFO, the first things you might consider are likely to hinge on the macro-economic environment you might face in the next five years and how you can make the most of your tenure against this economic backdrop.

Right now, one of the key factors that will affect defined benefit pension schemes is the aftermath of quantitative easing (QE). As a country, we have not been here before, so we have little idea how QE will unfold in practice. As we can see from Figure 1, gilt yields have fallen significantly while QE has been in place. Although the equity market has picked up over the same period, this has not been enough to compensate for the impact that declining gilt yields have had in increasing the values placed on pension liabilities. As a result, a sample scheme invested in a 60% equity/40% bond allocation is still almost 20% below its pre-crisis funding level. 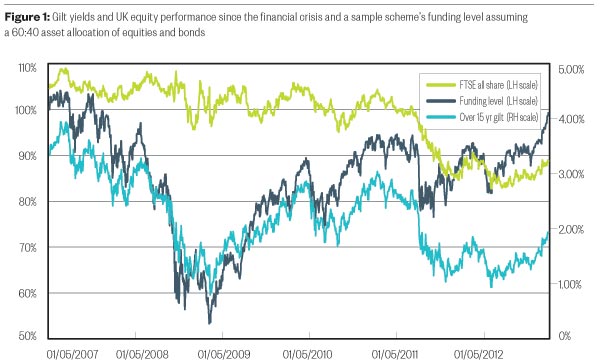 The first tranche of QE was implemented in early 2009, with the second phase between 2011 and 2012. In total, the programme has injected £375bn into the UK economy, with the Bank of England (BoE) now holding about a third of the total UK gilts in issuance, leading to a distortion in the gilt curve. Many organisations such as the National Association of Pension Funds (NAPF) continue to lobby that QE has resulted in an unprecedented increase in the value of pension liabilities in the region of £270bn [3].

Many people are expecting some level of reversal to the gilt curve, as, according to the law of common sense, what goes down must come up. But the unwinding of QE may not be as straightforward as a reversal of the gilt curve. To begin with, we could look at three key considerations as to how QE might unfold: the macroeconomic environment in which QE might be reversed; the actions the BoE will take to implement the reversal; and at what speed might the reversal take place.

A number of scenarios would support the case for withdrawing monetary stimulus, including the return of sustainable growth in the economy with some acceptable level of inflationary threats, given that the BoE's primary aim is to control inflation.

However, there are potential stumbling blocks. First, signs of the beginning of a triple dip can be disguised by early green shoots. Any misinterpretation of the early signals could lead to the Bank raising interest rates too soon. If there is a genuine triple dip and we are in a prolonged recession, the Bank may be forced to react once again. But how? With interest rates close to rock bottom and rounds of QE already implemented, the Bank may have no choice but to attempt to implement further rounds of QE. However, the extent of the existing programme means that the Bank would risk losing its credibility, if it has not done so already. Some might question the effectiveness of QE and the damage it will continue to cause to the underlying long-term health of the economy.

Second, how will the Bank unwind QE? One possibility is that the government could simply cancel the bonds held by the Bank and there has already been some speculation appearing in the financial press and blogs [4]. The government would then not need to pay interest on those gilts, but the Bank would be left with a £375bn hole with no assets to back it. The consequence could be vast, not least because there will be a no-confidence vote in the system as the Bank would be seen to have financed the government's debt by creating money.

And, third, what about timing? If the risk of triple dip subsides, the sudden reversal of interest rates to pre-crisis levels could cause serious issues for the private sector or households with variable mortgage rates, pushing the economy back into recession. We experienced this to some extent in the UK when interest rates were raised from 8% to 15% between 1988 and 1990, which was followed by GDP growth falling from 5% to -1.4% in 1991.

An unclear strategy from the Bank as to how monetary stimulus will be withdrawn will hinder both pension schemes and businesses in planning for the next few years. While the lack of action will mean that the short end of the curve will run its course, the long-end gilt curve may continue to stay low for some years while the Bank ponders the right action. As Andrew Sentance, senior economic adviser at PwC and a former member of the BoE's Monetary Policy Committee, has suggested, an announcement by the BoE of an orderly intention to raise rates would go a long way to help the country adjust to this 'new normal', but the Bank may be reluctant to do this.

Further, for pension schemes it could be a double whammy. Low interest rates have already led to the pound weakening, which could lead to high inflation for the UK rather than increasing exports, due to the inelasticity of UK exports. A combination of continued low gilt yields and high inflation could be very damaging.

Combining macroeconomic insights with traditional asset-liability modelling offers a powerful way to carry out a reality check between what might be achievable in the medium term against our long-term target. It takes us away from the unquestioning mindset of long-term returns without having a view about the shorter-term and sometimes brutal reality we try so hard to ignore. a

[1] According to the Curzon Partnership's analysis in 2012

Celene Lee is a pension risk and investment actuary in PwC's pensions team. William Zimmern is a macro-economist in PwC's economics team
This article appeared in our April 2013 issue of The Actuary.
Click here to view this issue
Filed in
04
Topics
Life insurance