While the implementation of Solvency II still appears to be a distant and ever-moving target, the onerous capital requirements of many traditional investments may encourage UK annuity providers to reassess the investments they hold in order to optimise the trade-off between risk and reward. Although Solvency II remains in draft form, we feel that the direction of travel and general framework is sufficiently clear for companies to contemplate high-level asset allocation over the next six to twelve months.

Publicly available data suggests that UK firms which are active in both the bulk and individual annuity markets generally tend to target an average A-rated portfolio, with limited exposure to sub-investment grade credits and some allocation to government and supranational bonds. As illustrated in Figures 1 and 2, this high-level investment strategy is observed with broad consistency across competitors and across time periods. The downward shift in the post-credit crunch period generally reflects deterioration in credit rather than a trend in risk appetite.

1. Disclosures of alternative investment strategies vary somewhat. For example, Aviva's £10+bn portfolio of commercial mortgages, which seems to be unrated but high quality, appears to be excluded. On the other hand, other investments such as equity release mortgages and private placements appear to be unrated but included in the above figures. %>

There are reasons to believe that investment mixes will change both as Solvency II brings an increased focus on the market risk component of insurers' balance sheets and as unprecedented market developments, especially in respect of the yield curve, focus attention on such fixed income assets.

Government bonds that used to offer risk-free return now appear to offer return-free risk as the yields on higher-rated sovereign debt, in perceived safe havens, are at historically low levels, which arguably do not compensate for the associated risk. In contrast, more lowly rated government bonds, running at historically high yields, presently attract no capital charges under Solvency II - although we note there are proposals to review this.

Draft capital requirements for credit spread risk under the Solvency II standard formula increase significantly with bond duration, penalising longer-dated bonds. While this looks likely to result in lower capital charges for short-duration, high-quality paper (Figure 3), these assets provide neither a good cashflow match for longer-dated liabilities, nor meaningful reward in the present low yield/high volatility economic environment. As such, many annuity writers may begin to look outside the traditional investments of government and corporate bonds in search of higher yielding assets or ways of de-risking their investment portfolios in order to achieve an optimal capital position.

1. Pre-diversification capital charges based on our understanding of the content of the draft Level 2 Implementing Measures as at October 2011; 2. Based on approximate spread levels available on various asset classes in mid-August 2012 as provided by RBC Capital Markets %>

Recent transactions may signal the first major shifts in asset allocation from some of the larger players, including:

1. Aviva disclosed in its strategic review that it was pulling out of large-scale bulk annuities. They separately cited credit risk as one of the main contributors to capital requirements;

2.    Phoenix's recent sale of a £5bn portfolio of annuity assets to Guardian Assurance as part of a de risking exercise;

3.    Legal and General's entry into the direct lending arena in both social housing as well as real estate-backed senior lending.


What alternatives are companies exploring?

One strategy implemented under Solvency I, and proposed for use under Solvency II, is to buy short-dated paper and obtain duration through interest rate swaps. While this strategy may appear attractive, particularly where swaps are traded through a centralised exchange with reduced associated credit risk capital charges, there are a number of issues with this strategy for annuity writers in particular:

    this strategy is unlikely to provide a meaningful 'matching adjustment' , as this is limited to the tenor of the cash instruments;

    banks' appetite to provide long-dated swaps is eroding and as such, bid/offer spreads will probably rise considerably over time;

    annuity providers are highly exposed to market movements over time. If credit spreads tighten, it may not be possible to achieve the requisite yield on the assets initially assumed. If they widen it may be because the general credit environment has deteriorated.

We are of the view that this strategy, while defensible, is unlikely to represent a perfect solution in isolation. Instead, more creative asset selection may be required in order to achieve meaningful, and hopefully sustainable, incremental yields over government bonds. Some UK annuity writers are currently exploring a number of alternative fixed income asset classes set out in Figure 4.

While the yields on such asset classes may look attractive relative to more traditional investments, consideration should also be given to whether such investments are permitted under current and expected regulations as well as any additional associated risks. 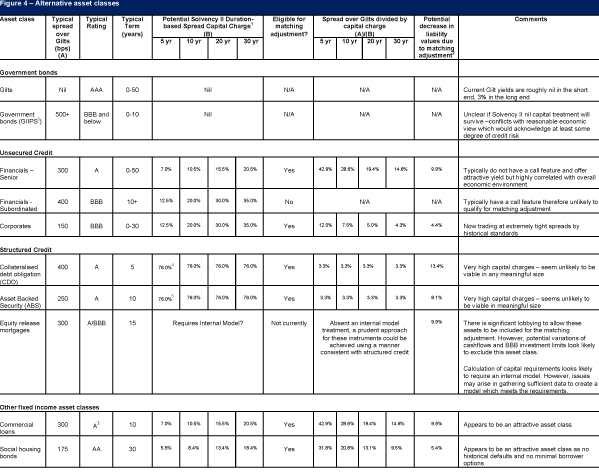 In particular, companies with long-term liabilities wishing to take credit for the 'matching adjustment' should consider whether the asset classes meet the criteria currently under development in the Omnibus II Directive. These include restricting holdings to assets of investment grade (generally accepted to be credit quality BBB or above), the need to ensure there are assets of sufficient duration with appropriate cash-flows to match liability cashflows (including inflation), as well as consideration of the security of the cashflows and any ability of the counterparty to alter these.

Specific observations on some of the asset classes include the following:

Collateralised funding (where an insurer uses repurchase agreements to temporarily "exchange" its government bond portfolio for less liquid bank assets) is a new development and may offer meaningful increases in yield for relatively low risk - some argue for no risk. While the Financial Services Authority appears to have some tolerance for these arrangements, insurers need to be very clear about the risks inherent in the collateral they are receiving. Although these risks can be managed by over-collaterisation or through valuation haircuts, insurers need to be in a position to judge the adequacy of these in each case. Furthermore, we remain somewhat sceptical that meaningful investments will be made by life insurers in this area for the following reasons:

-    Our sense is that most banks are only looking for shorter-dated funding (say up to five years) for which life insurer capital charges are relatively modest.
-    Banks' appetite is highly correlated to the ability to fund, and the cost of funding their own assets. For example, long-term refinancing operation (LTRO) activities earlier this year substantially relieved bank funding pressure virtually overnight suggesting that the sellers' appetite for these trades may prove rather fickle.
-    If the nature of the collateral requires an internal model assessment, then the associated increases in implementation costs may substantially negate the benefits.
-    This is a new idea which has not been tested in a variety of market cycles. As with many investment ideas, we may discover that 'low risk' simply means 'low risk until things go wrong'.

Life insurers appear to be developing their own commercial lending operations and bypassing the banks. In particular, Aviva's Commercial Finance business capability has generated in excess of £10bn of loans and it appears that other life insurers will enter the lending market in time. However, it remains to be seen whether such lending capability is developed organically, through merger and acquisition activity or through formal partnerships, where a life insurer agrees to buy and hold a proportion of a partner bank's lending book.

One area of intense debate in recent months has focused on whether issuer options to call will affect the matching adjustment calculation. While we do not have firm conclusions, it appears that much subordinated financial paper, which would include an issuer option to call the instrument after, say, ten years, may not qualify. The situation concerning equity release mortgages, where the borrower can choose to repay or move, remains unclear. This may limit the attractiveness of these asset classes or suggests that a robust internal model will be required in order to persuade regulators that a matching adjustment should be included.

In comparison, social housing appears to be a Solvency II-friendly asset offering reasonable yields, long tenors and a lack of historical defaults. While this asset class may prove attractive to insurers, we believe the key for it to flourish will be the evolution of government intervention through off-market direct lending and subsidies to the sector. Lower levels of intervention may force this sector to rely on funding at arm's length commercial pricing.

What will the banks do?

Multiple layers of new regulation and constraints represent fundamental changes for the banking industry - perhaps even more fundamental than Solvency II for insurers.

Broadly speaking, when considering capital charges, banks are being pushed in a similar direction to life insurers. For example, capital charges rise as tenors lengthen or credit risk increases. However, far more important for banks at the moment are their funding positions which in turn appear to be supported by government intervention. Many market participants had anticipated that bank deleveraging would provide investment opportunities for life insurers, but it appears that the LTRO and similar measures have reduced banks' appetite to address legacy funding issues quickly. Instead, banks and their regulators appear to have chosen to run off existing portfolios rather than sell them and crystallise losses.

In the short term, we may see a shift towards strategic partnerships between banks' origination capacity and insurers' balance sheets. Taking social housing as an example, banks could source assets in their usual way and retain a portion, say 10%, with the remainder going to an insurer on pre-agreed criteria.

The market backdrop appears to be here to stay and the past four to five years may represent the "new normal". Added to this, the draft Solvency II requirements introduce another inflection point but whose broad effects appear to be well understood (although the detail remains unclear).

In relation to investments, the supposed 'magic bullet' of insurers buying shorter-dated assets and accessing duration through swaps may not be ideal and instead insurers may look to continue to source duration through their credit portfolios.

Recent signs appear to indicate that insurers may start to own a larger proportion of the asset production chain - origination in particular. However, it remains to be seen whether the trend manifests itself through partnerships between banks and life insurers, life insurer acquisition of loan origination capabilities through M&A or by other means. In contrast, the role of banks as balance sheet providers will probably continue to recede over time.

While many alternative asset classes with potentially attractive capital-requirement-to-yield ratios may not provide the stability or investment characteristics to allow annuity writers to take credit for key provisions such as the matching adjustment, others such as social housing appear to fall into a sweet spot for Solvency II. In contrast, others still, such as the much-maligned asset backed securities, appear to be off limits by both the regulator and the market in general.

1. The matching adjustment is a provision included in the draft Solvency II specifications to allow annuity writers whose assets meet specific criteria in relation to the associated liabilities such that an additional premium is added to the discount rate used in liability valuations. This additional premium is based on a portion of the credit-adjusted spread of the backing assets.

2. Based on our current understanding of the standardised model before diversification credit

3. Calculated as the impact of a crude matching adjustment (of 50% of typical spread over Gilts less 0.4% for expected defaults, as proposed by the CFO Forum) on the discounted value of 20 year annuity cashflows

5.  Solvency II capital charges only specified for up to five-year duration

7.  Solvency II capital charges only specified for up to ten-year duration

William Coatesworth is a consulting actuary in the life practice of Milliman.
Eugene Dimitriou is a managing director in the Financial Institutions Group at RBC Capital Markets.