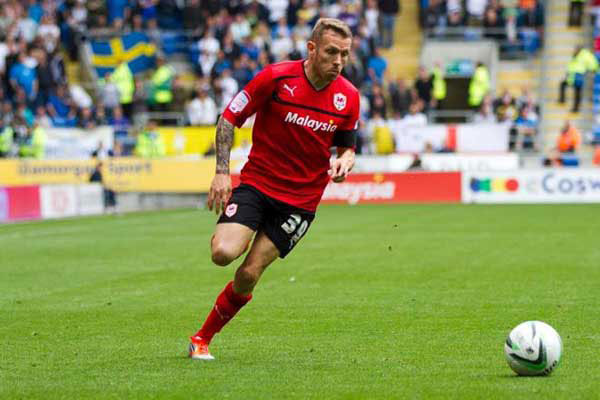 With annual TV revenues of over £50m, windfall payments for relegated clubs, increased ticket sales, merchandising and sponsorship, promotion to the Premier League is estimated to be worth around £100m. So who will win the jackpot this year?

Mark Lawrenson and his weekly guest do their predictions of Premier League results for the BBC and a quick look at their scores shows just how difficult this is, even for an expert. Out of a maximum weekly score of 30, 'Lawro' is averaging just over seven and his guests less than six. But can we do any better by simply looking at the statistics?

At the time of writing (22 February 2013) we're about two-thirds of the way through the season and - barring a Sergio Aguero strike in 'Fergie-time' - the Premier League is looking more like a one horse race. On the other hand, the second-tier Championship is notoriously unpredictable. Cardiff are still top of the table, despite their recent home defeat to Brighton, and Hull are sitting in the second automatic promotion spot.  Watford, Crystal Palace, Leicester and Middlesbrough are occupying the play-off places, closely followed by Brighton.

Our aim was to forecast the top six after 46 games using statistics alone, with no expert (or amateur) judgement clouding our prediction.

We started with a simple average points-per-game. Unsurprisingly this gives the same six in the same positions. It may be quite a good prediction, but it's hardly the basis for an article in The Actuary.

Then we had an idea; forecast the result of each individual game, and therefore the final positions. Clearly there is an advantage from playing at home - be it tangible or otherwise - but we can't use judgement in our forecasts. So we need statistics which reflect that.

We decided to look at the average number of goals scored by the home team (when playing at home) and the number conceded by their opposition (when away). We do the same thing for the away team. Then we model both using a simple distribution and simulate a few thousand times. We could have used a number of other methods but we have used goals before and even with little data - using just six Champions' League group games to predict the knock-out rounds - it has proven to be a good indicator. Hmm, are we starting to sound like underwriters, listening to our gut instinct?

As any actuary will tell you, making predictions is a dangerous game, but here goes anyway. Here is the top seven at the time of forecasting, and our predictions for the end of the season.

There's not much change - Cardiff and Hull go up automatically and Watford are slight favourites to win the playoffs, over Leicester. However, the crucial gaps between second and third and between sixth and seventh are very small. So we thought we'd dig a little deeper and look at the likelihood of each of these teams winning promotion, either automatically or via the playoffs.

You may have noticed a couple of apparent anomalies between these two sets of results. Hull are expected to finish second yet Watford, in third, have a higher probability of promotion. Similarly, Watford and Palace are currently only one point apart and predicted to be only two apart at the end of the season, yet their probabilities of promotion are very different.

In the first case Hull are slightly more likely to hang on to second but in the situations where they drop into the playoffs their poorer goal difference means they are less likely to win promotion. In the latter, it's Watford's higher likelihood of automatic promotion that drives the difference. While the points' gap may be small the chances of Palace overhauling both Watford and Hull are quite low; Watford only have to sneak past one team, Hull.

As an aside, we thought it would be interesting to know how the bookies set their initial odds (before adjusting for market behaviour) but we doubt they'll be publishing that information any time soon. Along the same lines, we also wondered if you offered the teams £100m x probability of winning promotion, would they take it? We concluded it would likely depend on who you ask - the manager or the chairman.

It may have less financial impact, but relegation is no less painful for supporters in any division. At that end of the table, Bristol City look doomed (75% chance of going down), while Peterborough (45%), Wolves (37%), Huddersfield (31%), and Ipswich (32%) are looking over their shoulders.

Time will tell if our method is any good.  In the meantime, we thought we'd share our results from the first four rounds of matches. Since running our model there have been 49 games played and we've got 25 correct (where the actual result matches the most likely result from our forecast).

Just over half may suggest we aren't doing very well but we're trying to predict the final positions and as any actuary will tell you getting every class right in a reserve review is a near-impossible task, getting it (about) right overall is what matters.

Here is how we expected the table to look, as of 10th March and how it actually looked - we've used the 50th percentile for our expected as it gives whole numbers of points and goals

Be it good fortune or good judgement, Cardiff are almost exactly where we had forecast them to be; after 35 games they have 71 points, a goal difference of 20 and are on target to go up as champions. 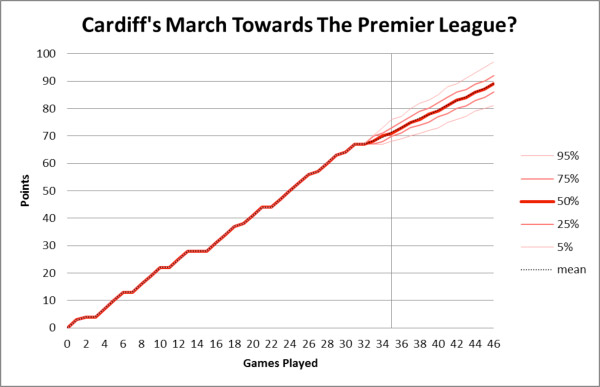 Watford too are performing as expected and have replaced Hull in second.  Crystal Palace are one point ahead of target and have also leap-frogged Hull, who are a point behind schedule having lost three of their four games. Like the Tigers, Middlesbrough have lost three and have dropped out of the play-off picture currently. They have been replaced in sixth, not by Brighton - who are on track - but by Nottingham Forest, the form team, who have picked up all 12 points on offer.

Think you can do better? Feel free to send in any suggestions. Also, watch this space for future updates to our forecasts.

Cameron Heath and Joe Ryan are both members of the Insurance Actuarial Practice at Barnett Waddingham.

This article appeared in our March 2013 issue of The Actuary.
Click here to view this issue
Filed in
03
Topics
Modelling/software