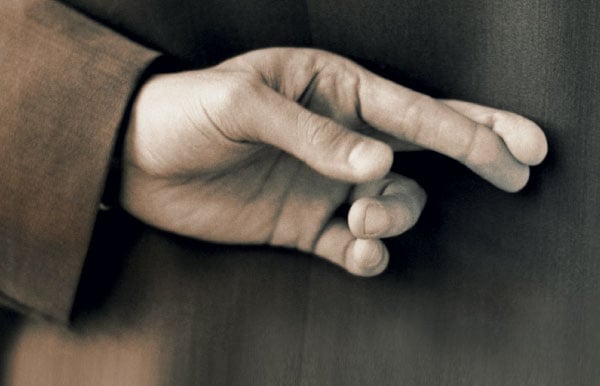 Life insurers have long recognised that the long-term policies they sell have value in terms of future expected profits. This value of in-force (VIF) is a key component of embedded values of companies reported in annual accounts.

So a unit-linked policy is expected to produce profits for a company every year until maturity if the annual management charge (AMC) is higher than the expenses incurred in that year. After an initial period where set-up expenses, including commission, have to be met, profits are generally expected as long as the policy is in-force.

Unlike with-profits, the asset allocation is determined by the policyholder, and most unit-linked policies have a high equity investment proportion. As the AMC is generally defined as a percentage of the value of the assets, this means that, should equities fall, the expected levels of future AMCs received would fall - as would the VIF.

So the two main risks to the VIF are falls in asset values and increases in policy lapses. Expense inflation is also a risk, but, by comparison, is seen as manageable and small.

You would therefore expect companies to actively manage the risk of VIF falling. However, in the UK, this is not commonly the case. The reason for this can be explained by looking at the current regulatory system.

VIF is not recognised as an asset when reporting solvency under Pillar 1 Peak 1 of Solvency I. Therefore, a fall in the value of the VIF has no impact on reported Peak 1 solvency. VIF is an important asset on individual capital assessment (ICA) balance sheets, so companies have considered hedging it. However, Peak 1 treatment of derivatives would mean a negative impact on Peak 1 solvency. ICA solvency levels are not publicly disclosed and so greater volatility can generally be absorbed on this measure.

The current proposed rules for Solvency II include VIF as a Tier 1 asset for reporting solvency, require it to be stressed to calculate the solvency capital requirement (SCR) and stipulate that solvency reporting will be public. We expect companies to be keen to minimise SCR and avoid reporting volatile solvency positions and hence to start to manage their VIF risk.

So, what can companies do? Historically, companies have entered into VIF securitisations, borrowing money, which is repaid out of future profits. This had the dual benefit of creating an asset for Peak 1 solvency purposes and locking in a level of future profitability. However, typically, only 50%-60% of the VIF is lent and so material volatility would still be possible.

Lapse risk can be managed by improving customer service and most companies have invested heavily to maximise retention rates. For other saving policies, such as with-profits, companies can reduce the asset risk by altering the assets held.

Peak 1 regulations restrict what a company can do in terms of reducing asset risk for unit-linked policies. INSPRU 1.2.62A requires the reserve to be at least as high as any surrender value, which, in most cases, means the reserve is equal to the unit fund. INSPRU 3.1.57R requires a firm to cover its linked liabilities with the assets to which those liabilities are linked. The combination of these rules is that assets have to be held equal to and identical to the unit fund.

However, under Solvency II transition plans, these rules will fall away, giving companies more flexibility. A best estimate liability (BEL) has to be calculated and this is likely to be lower than the unit fund, owing to recognition of the VIF. The proposed 'Prudent Person Principle' requires only the amount equal to the BEL to be held in assets matching the units. Assuming that assets equal to the unit fund are held, the VIF can be invested as the company requires.

The current ICA situation is between the two. The liability is a BEL but, because of the Peak 1 rules, the VIF has to be invested in the same assets as the units. This causes exposure to falls in the value of the VIF and capital will have to be held against this. In the rest of this article, we examine the best risk management strategies under both ICA and Solvency II for a sample book of business.

We have modelled a portfolio of equity backed unit-linked policies with a unit value of 1,000 and an outstanding term of 10 years. There is no surrender penalty and an AMC of 1%. We have assumed lapse rates of 5% pa and expenses have been ignored. The initial VIF is calculated as 73.2.

Figure 1 shows the amount of SCR that needs to be held against the most onerous of two representative 1-in-200 combined lapse and market shock scenarios for different asset allocations of the VIF between investments in equities and cash. We can see that the requirement of holding 100% of the VIF in equity is sub-optimal owing to the market risk. We can also see that investing the VIF in cash introduces lapse risk in scenarios where equities rise. Even under the optimal investment strategy, the SCR is over 30% of the VIF. 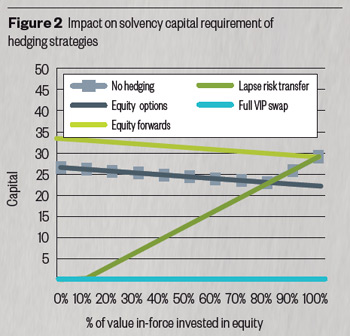 To manage this risk, companies will therefore need to consider derivatives or reinsurance of the risk. Figure 2 shows the impact on the SCR of equity options, equity forwards, lapse risk transfer and full VIF swap, ignoring the cost of the hedges and counterparty risk capital in all cases.

We can see that just carrying out equity options has little impact on the SCR, as the lapse scenario dominates in most cases. Equity forwards are worse as the loss in mass lapse/equity up scenarios increases. By definition, a full VIF swap locking in the current VIF will remove the SCR.

The interesting observation, however, is the impact of a lapse risk transfer. By combining this with investing the VIF in cash, it is possible to also reduce the SCR to zero. Under the proposed Solvency II regulations, this is likely to be the optimal solution as it should be cheaper than the full VIF swap. However, this is not an option under Solvency I.

It would be easy to conclude that the best current approach would be to enter into a full VIF risk transfer that locks in the future profits of the book. However, we have seen that if Solvency II is implemented as proposed, this is not likely to be optimal. We would therefore propose the use of a long-term lapse risk transfer, combined with one-year equity hedges until Solvency II is implemented. The exact transaction that a company will find optimal will depend on the relative cost of each of the hedging options, the actual mix of business and the capital model used by the company.

Scott Eason and Viktor Knava both work in the insurance and pension advisory team at Société Générale
This article appeared in our March 2013 issue of The Actuary.
Click here to view this issue
Filed in
03
Topics
General Insurance